War of Will tops Risen Star as Championship Season begins

Lecomte (G3) winner War of Will has been installed as the 5-2 morning line favorite among 14 runners in Saturday’s $400,000 Risen Star (G2), the second of three Kentucky Derby qualifiers at Fair Grounds. The 1 1/16-mile race also serves as the first of 16 races in the Championship Season portion of the Road to the Kentucky Derby series, with 50 points available to the winner.

War of Will picked 10 points winning the Lecomte with authority, scoring by a four-length margin as the 8-5 favorite, and it marked the first start on a fast main track for the former turf stakes performer. Owned by Gary Barber and trained by Mark Casse, the son of War Front will have to overcome an outside starting position after receiving post 13 and Tyler Gaffalione will be back aboard the stalker.

Owendale comes next at 6-1 following a fine tally over a well-regarded allowance field on January 17. By Into Mischief, the bay colt will make his first stakes attempt for Brad Cox and Shaun Bridgmohan retains the assignment. Lecomte runner-up Hog Creek Hustle has been pegged as the 8-1 third choice on the morning line and Florent Geroux sticks with the Vickie Foley-trained late runner.

Kentucky Jockey Club (G2) runner-up Plus Que Parfait will try to improve upon a fifth in the Lecomte and Julien Leparoux rides for Brendan Walsh. Limonite, unraced since rallying third in the Kentucky Jockey Club, will open his 2019 season for Steve Asmussen and adds a new jock in Brian Hernandez Jr.

After being scratched from the Lecomte, Mr. Money will make his first start since finishing fourth in the Breeders’ Cup Juvenile (G1). Regular rider Gabriel Saez has the call for Bret Calhoun. Country House invades from South Florida for Bill Mott following a good-looking maiden triumph at Gulfstream Park and Luis Saez will accompany the Lookin at Lucky colt.

Multiple turf stakes victor Henley’s Joy is scheduled to make his first dirt start and other contestants include Lecomte third-placer Manny Wah and Frolic More, who exits a rallying second to Owendale.

Santa Anita maiden winner Kingly isn’t expected to ship from Southern California and his defection would allow Gun It to draw in from the also-eligible list. 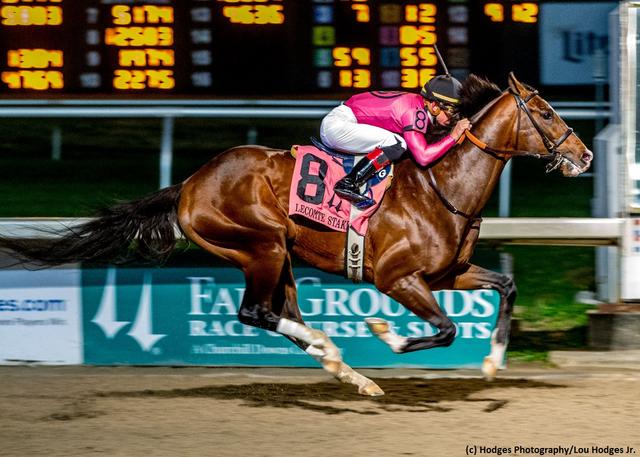