What's Next for Kentucky Derby Runners?

Where can you find the next races for Kentucky Derby runners?

So, you’ve taken an interest in the Kentucky Derby, through the prep races and the Triple Crown. Along the way, you’ve gotten to know the horses well, and maybe had some successful wagers.

The Derby and the Triple Crown, however, is not the end of the racing careers, or even the racing year, for these horses. And if you’ve followed these horses this far and gotten to know them, it would be a shame not to keep following them. There’s still plenty in store for horses like the Triple Crown race winners Always Dreaming, Cloud Computing, and Tapwrit, or characters like the unlucky Classic Empire and the one-eyed Belmont third-place finisher Patch.

Derby runners head in a variety of directions after the First Saturday in May. The leading horses normally compete in at least one Triple Crown leg; so far, of the 20 Derby starters, 10 (Always Dreaming, Lookin At Lee, Classic Empire, Tapwrit, Gunnevera, Gormley, Irish War Cry, Hence, Patch, and J Boys Echo) ran in either the Preakness or the Belmont, with Lookin At Lee the only one to run in both.

Four other Derby starters have run in other races since. The best effort came from Thunder Snow, who clearly didn’t show his best when bucking at the start of the Kentucky Derby and effectively not taking part. He returned to Europe, where he finished second to Churchill in the Irish 2,000 Guineas, and he’s set to take the same horse on again at Royal Ascot in the St James’s Palace Stakes next week.

Of the three others, 16th-place finisher Sonneteer has still to win a race after finishing fourth in a maiden at Santa Anita Park in California May 27, 17th-place finisher Fast and Accurate finished fourth in the Arlington Classic Stakes (G3) on turf on the same day, and 19th-place finisher State of Honor ran third in the Plate Trial Stakes June 11 at Woodbine, Canada. State of Honor is expected to run July 2 in the $1 million Queen’s Plate, the first leg of the Canadian Triple Crown, for Canadian-bred horses only.

Many Derby runners head towards major summer and fall targets. Here is a short list of notable races that Derby runners may appear in next:

This year’s running features the reappearance of McCraken, the favorite at one stage for the Derby after his victory in the Sam F. Davis Sakes. He was injured after that race and may have been below full fitness when finishing eighth in the Derby. His connections will hope he can match Gun Runner, last year’s Derby third-place finisher who then won the Matt Winn Stakes; Gun Runner subsequently won the Clark Handicap (G1), finished second in the Dubai World Cup (G1), and returns to racing at Churchill Downs June 17 in the Stephen Foster Handicap (G1).

With $500,000 on offer, this is a great consolation for horses coming out of the Derby. The outstanding Skip Away won in 1996, and the past two winners were Kentucky Derby runners: Mr. Z (13th in the 2015 Derby) and Mo Tom (8th in the 2016 Derby). Probables this year: Irap, the Kentucky Derby  18th-place finisher and winner of the Blue Grass Stakes (G2) at Keeneland, and Girvin, the Louisiana Derby (G2) winner and 13th in the Kentucky Derby.

A good race for 3-year-olds in California, this is reportedly the next target for Battle of Midway, who hasn’t run since his third-place finish in the Kentucky Derby.

Saratoga’s first major race for 3-year-olds is frequently a starting point after the Triple Crown series. Last year, three of the six runners had contested the Kentucky Derby, and winner Laoban was on the Derby also-eligible list. Affirmed resumed in the Jim Dandy Stakes in his first race after completing the 1978 Triple Crown, while other notable winners include 2007 Derby winner Street Sense. Probables: Preakness winner Cloud Computing, and Gunnevera. Possibles: At least one of trainer Todd Pletcher’s Triple Crown stars – Always Dreaming, Tapwrit, and Patch.

The first major Grade I race for 3-year-olds after the Triple Crown, it usually attracts a fantastic field. Often it’s the first race since the Triple Crown for the best 3-year-olds. Nyquist and Exaggerator, the first two in last year’s Kentucky Derby, resumed after the Triple Crown in this race, with Exaggerator winning, while this was also American Pharoah’s first race following his Triple Crown success, and he won in style. It’s an important race in itself, and it’s also a lead-in to subsequent targets like the Travers Stakes Aug. 26 and the Breeders’ Cup Classic Nov. 4. Probables: Irish War Cry, Classic Empire. Possibles: If Todd Pletcher’s top trio of Always Dreaming, Tapwrit, and Patch don’t run in the Jim Dandy Stakes, they could well run here. 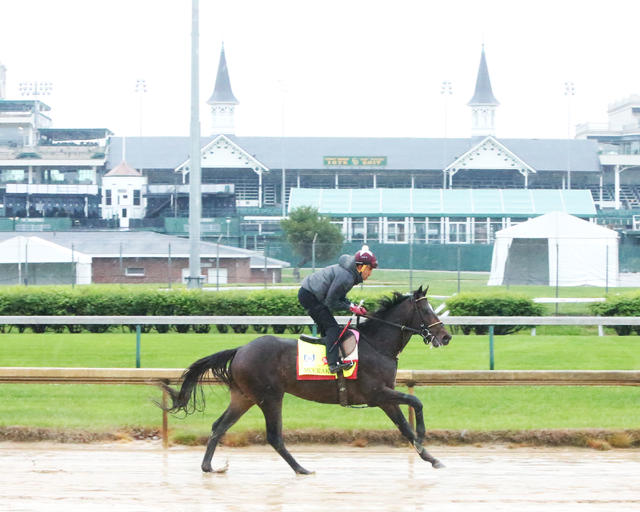