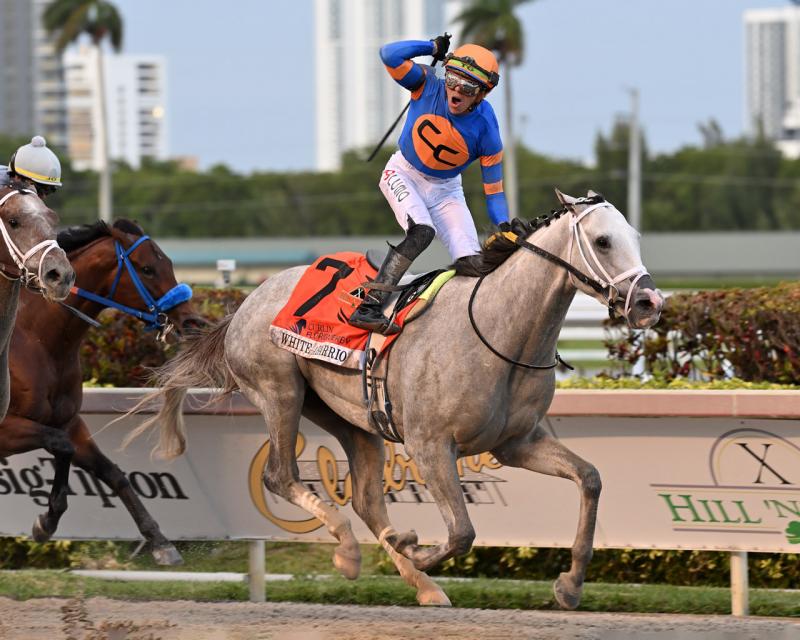 White Abarrio on Saturday fulfilled trainer Saffie Joseph's long-time dream of winning the $1 million Florida Derby (G1), and now heads back to Churchill Downs for a crack at the May 7 Kentucky Derby (G1).

"It means everything," Joseph said. "This is my home track and I grew up seeing the Florida Derby. It's right up there with the Kentucky Derby for me, especially since we're based here."

White Abarrio maintained his perfect record over the Gulfstream strip, rallying from a few lengths off the pace to claim the 1 1/8-mile Florida Derby by 1 1/4 lengths while giving jockey Tyler Gaffalione his fourth stakes win on the program. Charge It, making his stakes debut after breaking his maiden last out, turned in a terrific effort to finish second but showed greenness while attempting to close the gap on the winner.

Simplification, the 2-1 favorite, raced closer to the lead than he had in winning last month's Fountain of Youth (G2). He raced in second most of the way before tiring late to third, one length behind Charge It. Pappacap, who briefly led over Simplification at the six-furlong point after making a middle move, weakened to fourth.

White Abarrio, who races for C2 Racing Stable and La Milagrosa Stable, finished up nine panels in 1:50.64 and paid $7.80 as the second choice.

Last seen taking the Holy Bull (G3) by 4 1/2 lengths on Feb. 5, White Abarrio purposely bypassed the Fountain of Youth, but the plan to train up to the Florida Derby almost hit a major hurdle when the colt came down with a fever last week. He quickly recovered, though, and got in a final major workout.

"That's what good horses do," Joseph said. "They're able to overcome trainer errors and things that don't go right."

White Abarrio earned 100 qualifying points toward the Kentucky Derby, boosting his total to 112. Charge It earned 40 points, likely ensuring his spot in the Derby starting gate. Simplification increased his total to 74 points from 54 points, while Pappacap secured 10 more points and now has 24.

Although White Abarrio is perfect from four starts at his home base, he will have to prove he can carry that form to Churchill Downs. In his last trip there, for the Kentucky Jockey Club (G2) last November, the gray finished six lengths third behind Smile Happy.

Bred in Kentucky by Spendthrift Farm, White Abarrio is by Race Day and out of Catching Diamonds, by Into Mischief. He sold for $40,000 as an OBS March juvenile.

Kathleen O. was heavily favored, at 1-2, in the $250,000 Gulfstream Park Oaks (G2), and did not disappoint. After trailing for the opening half-mile, Kathleen O. made a wide bid into contention, ranged up alongside second choice Goddess of Fire on the far turn, and then put that rival away in the stretch to win by 2 3/4 lengths under Javier Castellano.

Owned by Winngate Stables and trained by Shug McGaughey, Kathleen O. covered 1 1/16 miles in 1:43.75 and returned $3. Goddess of Fire finished more than 17 lengths ahead of Running Legacy, who was 3 1/2 lengths ahead of fourth-placed Amani's Image. Blustery and Cancel This rounded out the order of finish.

Kathleen O., who already cemented a spot in the Kentucky Oaks (G1) with a two-length tally in last month's Davona Dale (G2), earned an additional 100 qualifying points toward the nine-furlong test and now has 150 points in total. Goddess of Fire also ensured a spot in the Oaks earning 40 points, increasing her total to 62 points. Running Legacy earned 20 points and Amani's Image 10 points, though neither are presently nominated to the Oaks.

"The Kentucky Oaks (G1) is a big spot for me," said McGaughey, whose only victory in the Churchill Downs fixture occurred back in 1993 with Dispute. "I've won it one time. I don't remember the thrill. I'd like to have it again."

Kathleen O. enters the Oaks undefeated from four starts. Prior to her wins in the Davona Dale and Gulfstream Park Oaks, she won on debut by a head at Aqueduct in November before following up with an 8 1/2-length tally in the Cash Run S. at Gulfstream on Jan. 1. She's bankrolled $379,730.

Bred in Kentucky by Gainesway Thoroughbreds and Bridlewood Farm, Kathleen O. was most recently a $275,000 OBS juvenile purchase. By Upstart, she was produced by the stakes-placed Quaver, by Blame. 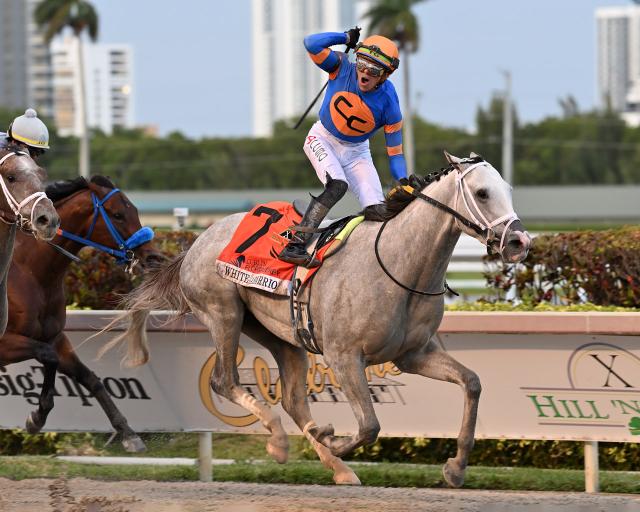