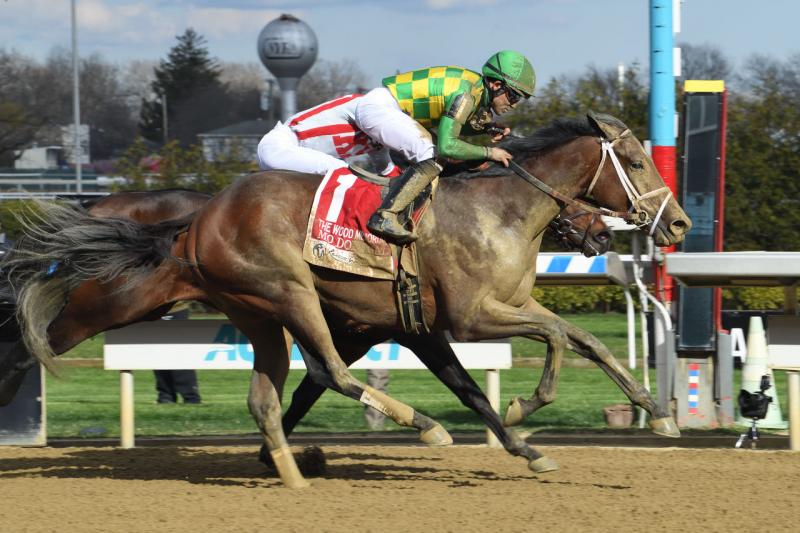 You might say that Uncle Mo has “big mo” as a sire in recent weeks. In addition to Mo Donegal’s confirming his status as a major Kentucky Derby (G1) contender in the Wood Memorial (G2), brilliant turf sprinter Golden Pal dominated his prep for Royal Ascot, and one of Uncle Mo’s juvenile colts just sold for $2.3 million Tuesday at the OBS Spring Sale.

Here are Mo Donegal’s pedigree fun facts:
1. Champion Uncle Mo was scratched from the 2011 Kentucky Derby.
The undefeated champion two-year-old colt of 2010, with romps in the Breeders’ Cup Juvenile (G1) and Champagne (G1), Uncle Mo unfortunately had his Derby hopes derailed by illness. He lost his perfect record when third in the Wood, exiting the race with a gastrointestinal malady, and his bloodwork still wasn’t right by Derby week. Uncle Mo returned later in the season with a near-miss in the King’s Bishop (now the H. Allen Jerkens Memorial) (G1) at Saratoga, and he beat older horses in the Kelso H. (G2). Like his son Mo Donegal, Uncle Mo was trained by Todd Pletcher.
2. Uncle Mo bids to join the club of sires with two Derby winners.
Uncle Mo got off to a fast start at stud, siring 2016 Kentucky Derby winner Nyquist in his very first crop. Nyquist had also compiled a perfect juvenile campaign capped by the Breeders’ Cup Juvenile. Emulating the feat of Street Sense by turning the Juvenile/Derby double, he suffered his first loss when third in the Preakness (G1) to slop-loving Exaggerator.
Uncle Mo’s already emerging as a sire of sires. Nyquist himself had a 2022 Derby hopeful in Slow Down Andy, until he was recently ruled out by fever. But another son of Uncle Mo, Laoban, is represented by Un Ojo.
3. Uncle Mo could go for a rare Kentucky Oaks/Derby double.
While hot young sires Gun Runner and Upstart are grabbing attention for having leading contenders in both the Derby and Kentucky Oaks (G1), Uncle Mo has an outside shot at the rare double. His daughter Cocktail Moments would need to find a way to reverse form after placings in the Ashland (G1) and Davona Dale (G2). Uncle Mo’s flashiest Oaks hopeful, Adare Manor, crushed the Las Virgenes (G3) but got upset in the Santa Anita Oaks (G2). That narrow loss puts her on the bubble, and at this writing, a couple of others must defect for her to draw into the top 14.
As in the Derby, Uncle Mo has competition from a son. Nyquist’s filly Turnerloose is safely in the Oaks field, and another daughter of Nyquist, Awake at Midnyte, is further down the points list.
4. Uncle Mo is by beaten Derby fav Indian Charlie, from the sire line of Winning Colors.
Uncle Mo’s sire, Indian Charlie, brought a 4-for-4 record into the 1998 Kentucky Derby. Although Indian Charlie had prevailed over stablemate Real Quiet in the Santa Anita Derby (G1), he couldn’t duplicate that effort at Churchill Downs. Indian Charlie wound up third as the 2.70-1 favorite and never raced again.
Indian Charlie has infused new life into his branch of the *Nasrullah sire line. *Nasrullah’s influence in North America lies chiefly with his Hall of Fame sons Bold Ruler and Nashua. In contrast, Indian Charlie hails from a more European-oriented line, via the *Nasrullah stallion Grey Sovereign and his descendant Caro, a French classic-winning champion.
Caro became a sire of transatlantic significance. After his importation to the Bluegrass, Caro was responsible for 1988 Kentucky Derby queen Winning Colors; 1985 Breeders’ Cup Mile (G1) champ Cozzene; Canadian Hall of Famer With Approval; and Siberian Express, who won the same French mile classic as his sire, and got In Excess, the sire of Indian Charlie. Irish-bred In Excess turned out to be a star on the dirt in New York, sweeping the 1991 Metropolitan H. (G1), Suburban H. (G1) (in a track-record 1:58.33 for 1 1/4 miles at Belmont Park), Whitney H. (G1), and Woodward (G1). 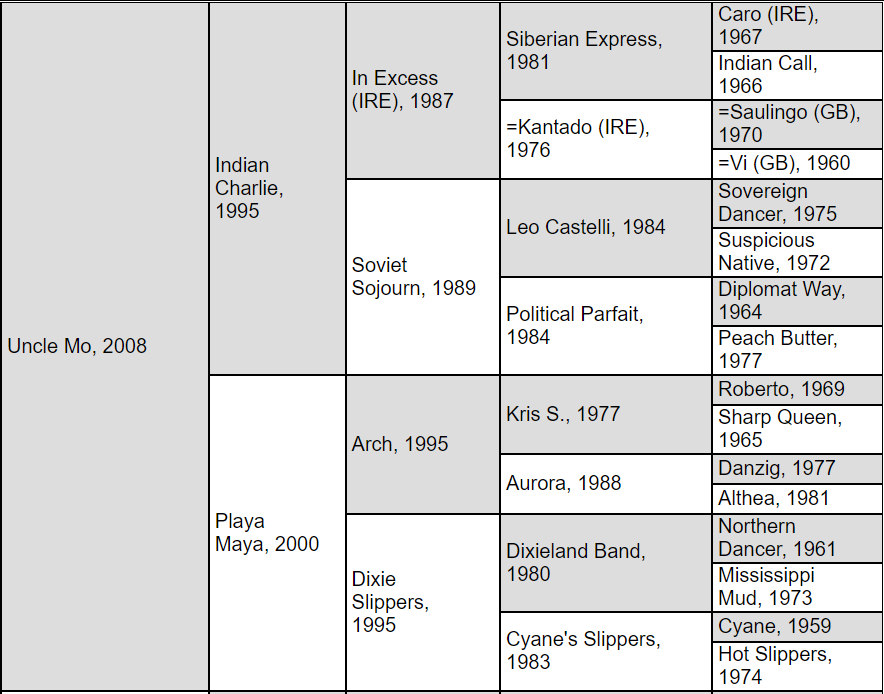 5. Uncle Mo has the same broodmare sire as I’ll Have Another.

Uncle Mo’s dam, Playa Maya, is by Arch, who also factors as the broodmare sire of 2012 Kentucky Derby and Preakness hero I’ll Have Another. Arch’s top son is champion Blame, best known for foiling hitherto unbeaten Zenyatta in the 2010 Breeders’ Cup Classic (G1).
Playa Maya’s dam, Dixie Slippers, is by another noted broodmare sire in Dixieland Band. Two of his daughters have produced Derby winners Monarchos (2001) and Street Sense (2007).
6. Mo Donegal’s dam, Callingmissbrown, has two crosses of Secretariat.
Callingmissbrown’s pedigree features a duplication of supersire Mr. Prospector, but Triple Crown fans will note that she also carries two crosses of Secretariat. The 1973 Triple Crown legend is the broodmare sire of two key influences in her ancestry, Hall of Famer A.P. Indy and Storm Cat.
Callingmissbrown is by A.P. Indy’s son Pulpit, and her dam is by Storm Cat’s son Tabasco Cat. Thus she is bred on the same pattern as the 2010 Kentucky Derby runner-up, Ice Box, who was likewise by Pulpit out of a Tabasco Cat mare.
7. Pulpit, fourth to Silver Charm in the 1997 Derby, ranks as a significant influence.
Pulpit rapidly developed on the 1997 trail, taking the Fountain of Youth (G2) and Blue Grass (G2) on either side of a second in the Florida Derby (G1). But his progress was halted with a fourth behind Silver Charm in the Run for the Roses, and it transpired that he was injured.
Retired to stud, Pulpit has exercised an enormous influence by siring Tapit, responsible for a record-tying four Belmont (G1) winners capped by 2021 champ Essential Quality. A lesser-known son of Pulpit, Lucky Pulpit, sired $14.7 million-earner California Chrome, the 2014 Kentucky Derby and Preakness star and two-time Horse of the Year. And Pulpit lurks as the broodmare sire of Stage Magic, dam of 2018 Triple Crown sweeper Justify.
8. Mo Donegal’s granddam is Grade 1-winning millionaire Island Sand.
Callingmissbrown is out of Island Sand, the runner-up to Hall of Famer Ashado in the 2004 Kentucky Oaks. Island Sand scored her signature win next time out in the Acorn (G1). At four, she added the lucrative Delaware H. (G2) and signed off with more than $1.1 million in earnings. 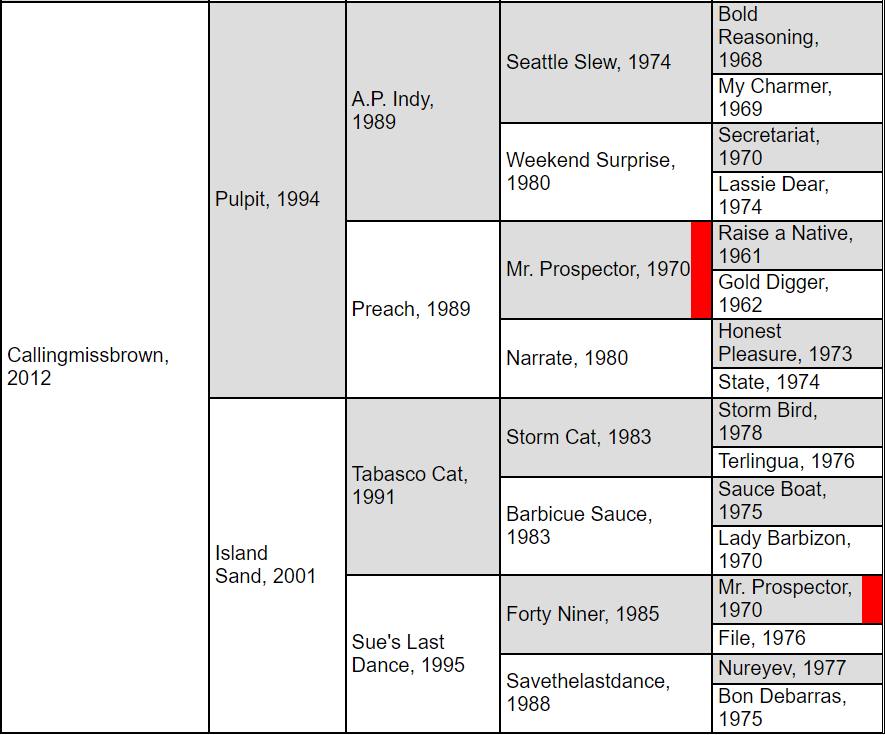 Island Sand’s sire, Tabasco Cat, wasn’t the champion of his year despite winning two jewels of the Triple Crown. That’s because he was in the shadow of fellow three-year-old Holy Bull, who would be honored as Horse of the Year after an uncharacteristic flop in the Kentucky Derby. Tabasco Cat was himself only sixth in the Derby behind Go for Gin at a sloppy Churchill Downs, but turned the tables in the Preakness and Belmont. Holy Bull, who skipped those classics, secured his Hall of Fame career by beating elders in a pair of majors and leaving Tabasco Cat well behind in third in the Travers (G1).
10. Forty Niner, who just missed to Winning Colors in 1988, is now an ancestor of Derby winners.
Island Sand is out of a mare by Forty Niner, the champion two-year-old colt of 1987 who came up a neck shy of catching Winning Colors in the 1988 Derby. He would go on to score hard-fought victories in the Haskell (G1) and Travers.
At stud, however, Forty Niner would gain Derby compensation of sorts. His son Distorted Humor sired Funny Cide, the 2003 Derby and Preakness champion. Another Distorted Humor stallion, Flower Alley, got I’ll Have Another, who captured the same two-thirds of the crown in 2012. Forty Niner himself sired a Belmont winner in Editor’s Note (1996), as did Distorted Humor with Drosselmeyer (2010).
11. Mo Donegal’s third dam is a half-sister to a Queen’s Plate winner.
Island Sand’s dam, Sue’s Last Dance, is a half-sister to Niigon, hero of Canada’s premier classic, the 2004 Queen’s Plate. Both were produced by the multiple stakes-placed Savethelastdance, a daughter of renowned international patriarch Nureyev. This is the family of Canadian Hall of Famer Eternal Search, fellow Sovereign Award champion Embur’s Song, and Exaggerator.
12. Mo Donegal traces to a remote ancestress of Sunday Silence.
This female line arises from the great matron Quiver (foaled in 1872), whose far-reaching offspring include English Fillies’ Triple Crown legend La Fleche, dual classic heroine Memoir, and Maid Marian. Hall of Famer Sunday Silence traces to La Fleche, while Mo Donegal’s ancestress is an older daughter of Quiver, Satchel. Bred by Queen Victoria, Satchel established her own subset (3-g) of the family.