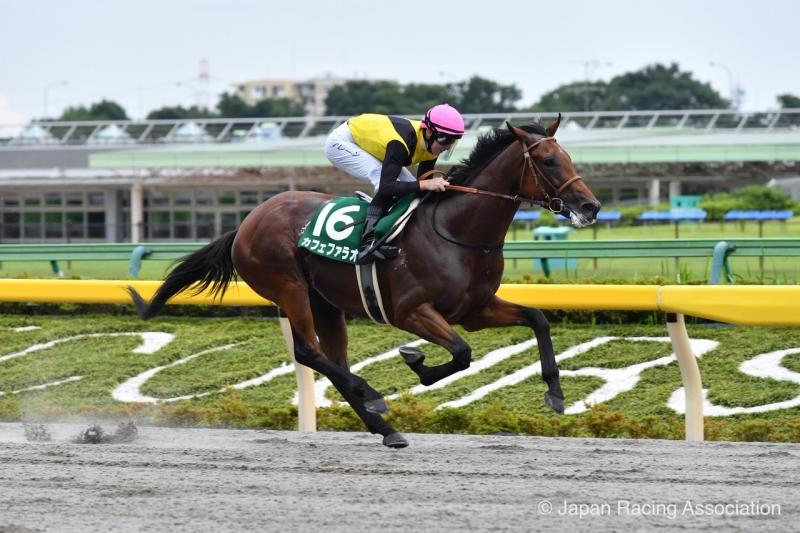 American Pharoah’s unbeaten son Cafe Pharoah enhanced his Kentucky Derby (G1) credentials with a dominant victory in Sunday’s Unicorn S. (G3) at Tokyo. Drawing off by five lengths in a fast time, the Kentucky-bred is firmly in command of the Japan Road leaderboard with 70 points.

Cafe Pharoah ranked as the even-money favorite after winning his first two starts in contrasting ways. The Noriyuki Hori pupil romped in a Dec. 14 newcomers’ race at Nakayama on the front end. But in his stakes debut in the Feb. 23 Hyacinth at this track and trip, he got off to a slow start and ended up rallying from last.
The Unicorn gave him the opportunity to demonstrate another set of skills. Fans had reason to feel a little apprehensive, though, as Cafe Pharoah was keyed up and sweating in the preliminaries. As it turned out, his pre-race behavior had no effect on his performance.
From the far outside post 16, Cafe Pharoah broke well and used energy to secure a stalking position. Then the colt relaxed, so much so that jockey Damian Lane wondered if he’d offer any more of a run.
Meanwhile, 2-1 second favorite Lecce Baroque was winging up front. Cafe Pharoah cruised alongside her at the top of the stretch, with fellow Triple Crown nominee Full Flat trying to make it a line of three abreast. But Full Flat was working harder, and Lecce Baroque was about to weaken.
Cafe Pharoah appeared to be humoring them as he was moving easily without pulling away just yet. As soon as Lane turned him loose, the Derby contender put the race away with a dynamic kick and finished in a stakes-record 1:34.9 for the metric mile on a good track.
Dieu du Vin, the 5-1 third choice, closed strongly from off the pace to take second. Adding 16 points to the 10 he earned by winning the Nov. 23 Cattleya Sho, Dieu du Vin now has 26 points to sit second on the leaderboard.
The third- and fourth-place finishers, Kenshinko and Thunder Blitz, would get 8 and 4 points, respectively, but are not Triple Crown-nominated. Full Flat faded to sixth, and Lecce Baroque suffered her first loss in ninth. Triple Crown nominee Tagano Beauty, who had been runner-up to Cafe Pharoah in the Hyacinth, didn’t get close in 13th of 16.
Campaigned by Koichi Nishikawa, Cafe Pharoah is now a perfect 3-for-3. The $475,000 OBS March juvenile purchase is the third graded stakes victor produced by the Grade 2-winning More Than Ready mare Mary’s Follies, after Night Prowler and Regal Glory. They were all turf performers, while Cafe Pharoah is a rising star on the dirt.
Lane believes that there’s more to come from the exciting colt.
“There’s no ceiling on him yet. He’s still improving,” the Australian said in the postrace interview.

Cafe Pharoah’s total of 70 points – 40 from the Unicorn and 30 from the Hyacinth – put him in an unassailable position as the Japan Road leader. One scoring race remains, the July 8 Japan Dirt Derby, worth points on the same 40-16-8-4 scale. The only rival with a mathematical chance of topping him, Fukuryu S. scorer Herrschaft, is not Triple Crown nominated and not on the trail according to Churchill Downs.
Moreover, Cafe Pharoah could pad his total on July 8. He’s on the list of JRA horses eligible for the Japan Dirt Derby, held at about 1 1/4 miles at Oi Racecourse. 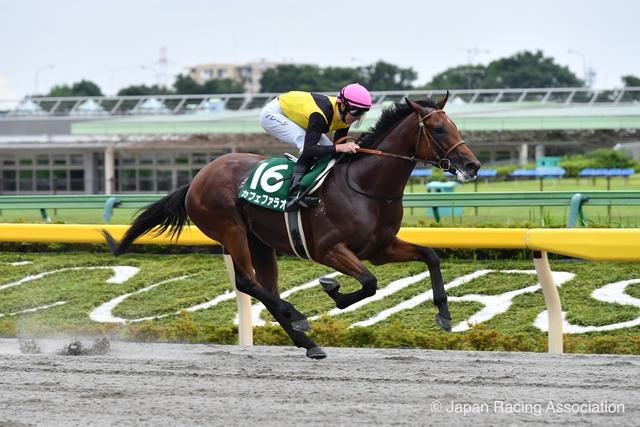