The Japan Road to the Kentucky Derby concludes Sunday (Saturday night 12:25 a.m. EST) with the Hyacinth Stakes over a metric mile at Tokyo, and five of the 15 entrants are nominees to the Triple Crown.

Two already have Derby points on the board – Mont Saint Legame and Caucus, the winner and runner-up, respectively, from the November 26 Cattleya Sho. Mont Saint Legame earned 40 points, and Caucus took home 16 points, in that first scoring race ever held in Japan.

But because the new Japan Road to the Derby offers a separate and distinct scoring system from the long-established series of preps, both must step up in the Hyacinth to secure a spot in the Kentucky Derby starting gate. The Hyacinth offers points on a scale of 50-20-10-5, and Japan’s overall top point-getter will garner an invitation to Derby 143.

Last year, Japan’s Triple Crown competitor Lani was only fifth in the Hyacinth after capturing the 2015 Cattleya Sho in his juvenile finale. If Mont Saint Legame wants to turn the double, he’ll have to beat a couple of serious rivals.

Epicharis not only brings a perfect three-for-three record into the Hyacinth, but he’s won each time in an absolute romp. The Kiyoshi Hagiwara trainee, who boasts a win over this track and trip in October, was last seen trouncing the Hokkaido Nisai Yushun (a Japanese Grade 3) at about 1 1/8 miles on November 1. Regular rider Christophe Lemaire will be back aboard the grandson of Sunday Silence, who is reportedly eyeing the March 25 UAE Derby (G2) and the Belmont Stakes (G1).

Foggy Night, another UAE Derby contender, is likely to attract plenty of support off his smart debut win. By Tapit and out of multiple Grade 1 winner Champagne d’Oro, Foggy Night checks all the boxes on pedigree and connections. He’s trained by Noriyuki Hori, who’s conditioned the likes of superstar Maurice, and the in-demand Ryan Moore is back in town for the ride. Moore did the steering job when Foggy Night rolled in his only start here on November 12.

Mont Saint Legame is unbeaten himself, sporting a two-for-two mark, and the Koji Maki pupil may have still more up his sleeve. The son of Came Home descends from a particularly productive Japanese family. Although not initially penciled in for the UAE Derby, Mont Saint Legame is reportedly considering a trip to Dubai next month.

As you’d expect, Sheikh Mohammed’s homebred Caucus is engaged in the UAE Derby as well. But the son of 2007 Kentucky Derby star Street Sense hasn’t progressed since his second to Mont Saint Legame in the Cattleya Sho. In his two subsequent allowance tries for horseman Hideaki Fujiwara, Caucus has finished fifth and sixth. Both came at about nine furlongs, however, and the cutback in distance could help. So could the booking of top Japanese rider Keita Tosaki, who hasn’t been aboard since the Cattleya Sho.

Rounding out the Triple Crown-nominated quintet is Adirato. Successful in both of his outings since switching to dirt, he’s likewise eligible for the UAE Derby. Legendary Yutaka Take has the mount for Naosuke Sugai, trainer of such standouts as Just a Way and Gold Ship.

Of those not nominated to the Triple Crown, contenders include Bullbear Baboon, twice a winner on dirt (including a juvenile track record at Kyoto for about 1 1/8 miles) who flopped in the prestigious Asahi Hai Futurity (G1) on turf; unbeaten Liverdy, who like Mont Saint Legame has raced exclusively at this track and trip; Hypernova (from the first crop of 2012 Derby and Preakness [G1] champion I’ll Have Another), a nose away from being undefeated in three starts; Shigeru Kong, second in a Japanese Grade 1 at Kawasaki last out; the filly Stapes Maria, a daughter of 2008 Louisiana Derby (G2) winner Pyro, who’s two-for-two on dirt; and recent allowance winners Captain King, Goodhumour, and Shigeru Bengaltora.

Here is the field (screenshot from japanracing.jp) with post positions. You can watch and wager at TwinSpires.com (click here for Hyacinth past performances). 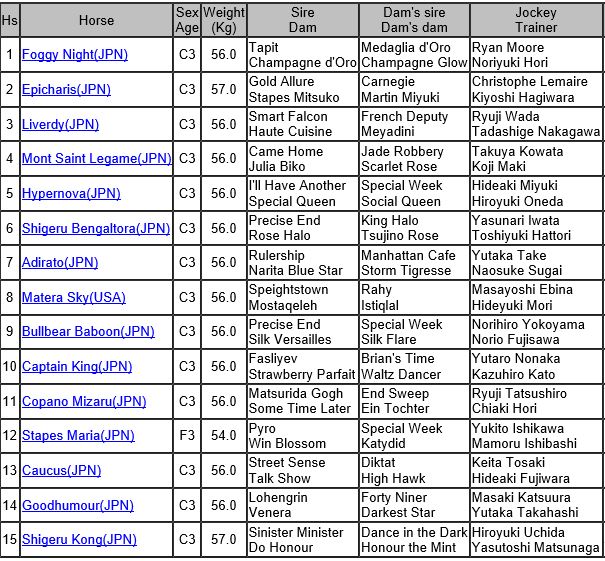 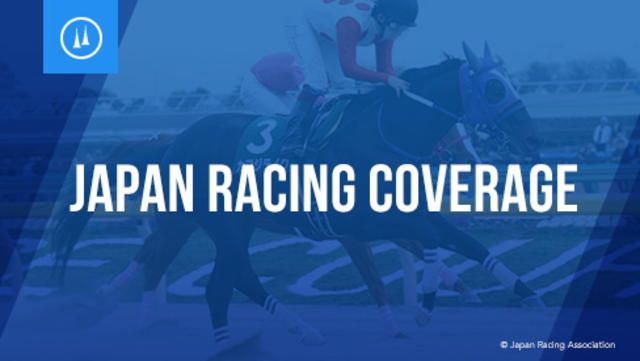