Meet the Japanese-based nominees to the 2017 Triple Crown

Continued from Part 1 on the European nominees

After Churchill Downs Inc. and the Japan Racing Association devised a “ Japan Road to the Kentucky Derby,” and the New York Racing Association followed up by offering a $1 million bonus to a Japanese-based winner of the Belmont S. (G1), it’s encouraging to see nine horses from Japan on the list of Triple Crown nominees.

Mont Saint Legame and Caucus have already scored points by finishing one-two in the first race on the Japan Road to the Derby, the November 26 Cattleya Sho over a metric mile at Tokyo. This scoring system is separate and distinct from the overall Derby points leaderboard. Japanese hopefuls have one more scoring race in the February 19 Hyacinth S., held over the same track and trip. The top point-getter from their two races, who accepts the invitation, will get the opportunity to represent Japan in the May 6 Kentucky Derby.

Both of those races had factored on the resume of Japan’s 2016 Triple Crown competitor, Lani. After winning the 2015 Cattleya Sho, he was only fifth in the Hyacinth, but rebounded in the U.A.E. Derby (G2) to earn his way to Churchill Downs. With the new Japan Road to the Kentucky Derby, this season’s Japanese aspirants can try to punch a ticket at home. But the U.A.E. Derby remains an alluring stepping stone.

Cattleya Sho runner-up Caucus, by 2007 Kentucky Derby winner Street Sense, has 16 points to his credit. A Darley homebred racing for Sheikh Mohammed, he is trained by Hideaki Fujiwara, who has conditioned top runners on both turf (Eishin Flash and Straight Girl) and dirt (Roman Legend and Success Brocken). Caucus won first time out at Hanshin before his fine second in the Cattleya Sho, but in his reappearance at Kyoto on January 17, he was only fifth. Perhaps Caucus needed that run to bring him on; he’s entered in another 1,800-meter (about 1 1/8-mile) allowance back at Kyoto on Saturday, and that should tell us more. (Update: Caucus was off the board again, this time winding up sixth.)

Yet arguably the best of Japan’s dirt three-year-olds are still awaiting their first points race.

Undefeated Epicharis is expected to contest the Hyacinth, and he also holds an engagement in the March 25 U.A.E. Derby. By noted dirt stallion Gold Allure (a son of 1989 Kentucky Derby and Preakness champion Sunday Silence), Epicharis has routed his foes in all three lifetime starts, at three different tracks, as the favorite. He rolled by six lengths in his debut over about nine furlongs at Niigata, by seven going a metric mile at Tokyo, and wired the November 1 Hokkaido Nisai Yushun at Mombetsu by a margin officially recorded as a “distance.” Owned by U. Carrot Farm and trained by Kiyoshi Hagiwara (who prepared 2009 Japanese Derby winner Logi Universe), Epicharis has yet to be tested.

Blueblood Foggy Night is reportedly penciled in for the U.A.E. Derby. Although bred in Japan, his parentage is familiar to American fans: he is by leading sire Tapit and out of Champagne d’Oro, winner of the 2010 Acorn (G1) and Test (G1). Champagne d’Oro herself is a Medaglia d’Oro half-sister to 2011 Belmont Stakes shocker Ruler on Ice. The joint second-best seller at the 2015 JRHA Select Sale, Foggy Night was purchased by Kaneko Makoto Holdings, the owner of legendary Deep Impact, for about $2 million. Foggy Night has raced just once, creating a favorable impression when splitting foes and drawing off over Tokyo’s metric mile on November 12. Trainer Noriyuki Hori has burst onto the international scene for his work with such luminaries as Duramente and Maurice, and Foggy Night might continue the trend.

Kentucky-bred Levante Lion  (pictured) is by Pioneerof the Nile (sire of Triple Crown sweeper American Pharoah and current champion and Derby hopeful Classic Empire) and out of a mare by Ghostzapper (sire of McCraken). Sold for $150,000 as a Keeneland September yearling, Levante Lion started out with a bang sprinting on the Hakodate turf. He prevailed in his debut, then added the Hakodate Nisai in stakes-record time. Levante Lion subsequently lost his way with a pair of unplaced efforts in graded company late in the fall. A move to dirt could wake him up for trainer Yoshito Yahagi, whose past celebrities include Grand Prix Boss, 2012 Japanese Derby scorer Deep Brillante, and last year’s Dubai Turf (G1) victor Real Steel.

Naosuke Sugai, famous for conditioning Just a Way and Gold Ship, has a pair of nominees in Adirato and Task Force. Adirato dropped his first three starts on turf, but came to life after switching to dirt. After distancing his foes in record time in a Hanshin maiden, Adirato made it two in a row over the same about seven-furlong trip at Chukyo January 16. Task Force has raced exclusively on dirt so far, compiling a 4-1-0-2 record.

Highland Peak, who missed by a neck at Hanshin in September, kicked off his sophomore campaign with an eight-length romp at Nakayama on January 7. He’s entered in an allowance at Tokyo on Saturday. (Update: Highland Peak finished third as the favorite.)

Also in on Saturday is My Blue Heaven , set to line up in the same Kyoto allowance as Caucus (and finished eighth). This is the second straight race in which they’ve squared off, for My Blue Heaven was eighth to Caucus’ fifth last out. That race actually featured three of Japan’s Triple Crown nominees; the aforementioned Task Force fared best of them in third. My Blue Heaven, unplaced in his first two turf tries, broke his maiden on the dirt at Hanshin.

We’ll have more on the Japanese contenders ahead of their second points race, the Hyacinth. 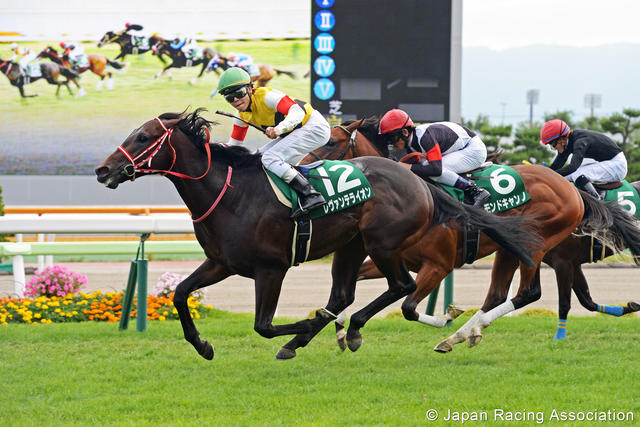