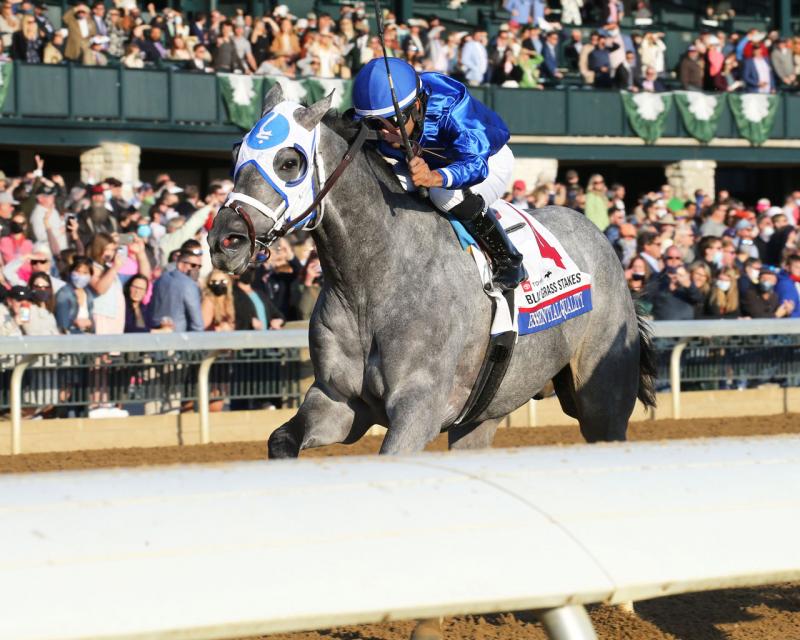 Saturday’s $1.5 million Belmont S. (G1) shapes up as a clash between the Kentucky Derby (G1) and Preakness S. (G1) form. Five horses last seen on the first Saturday in May at Churchill Downs, including beaten favorite Essential Quality, will test the newfound status of Preakness upsetter Rombauer.

Essential Quality entered the Derby with a perfect 5-for-5 record. The champion two-year-old male after capping his season in the Breeders’ Cup Juvenile (G1), the Godolphin homebred kept rolling through preps in the Feb. 27 Southwest S. (G3) and April 3 Blue Grass (G2). But a bumpy start in the May 1 Run for the Roses, and wide trip throughout the 1 1/4 miles, proved costly as Essential Quality checked in a close fourth.
A son of Tapit, who has sired three Belmont winners, Essential Quality figures to get a more favorable trip in the 1 1/2-mile “Test of the Champion.” The Brad Cox trainee has been installed as the 2-1 favorite with regular rider Luis Saez.
Derby third Hot Rod Charlie had a better passage around Churchill than Essential Quality, and crossed the wire just a head in front of him. Runner-up to Essential Quality in their only prior meeting in the Breeders’ Cup, Hot Rod Charlie might find it more difficult to beat him at Belmont. But the Doug O’Neill pupil has been on an upward trajectory.
Hot Rod Charlie wired the March 20 TwinSpires.com Louisiana Derby (G2) in track-record time at Fair Grounds two starts back, and his forward style plays well in this race. He also keeps jockey Flavien Prat, who honored his commitment to Hot Rod Charlie despite guiding Rombauer to victory in the Preakness.
Likely pacesetter Rock Your World is hoping to turn the page on a Derby debacle. The 4.70-1 second choice after dominating Medina Spirit in the Santa Anita Derby (G1), Rock Your World broke a beat slow at Churchill and became an equine pinball. The inexperienced colt took the worst of an early barging match with Essential Quality. His race was virtually over at the start, and he wound up 17th. Trained by John Sadler, the well-bred son of Candy Ride had been 3-for-3, including two sharp scores on turf before trying the dirt at Santa Anita. Jockey Joel Rosario is back aboard the frontrunning threat.
The other two Derby alumni represent newly-elected Hall of Famer Todd Pletcher – ninth Known Agenda and 13th Bourbonic.
Known Agenda, a visually impressive winner of the Florida Derby (G1), was shuffled too far back from his rail post at Churchill. In the circumstances, he performed creditably to improve position, and the Curlin colt will work out a more typical trip around Belmont Park. With Irad Ortiz sidelined by a Thursday spill, it remains to be seen who will pick up the mount on Known Agenda.
Bourbonic, a 72-1 shocker in the April 3 Wood Memorial (G2), never got involved in the Derby. As a deep closer, the Calumet Farm homebred will have his work cut out for him trying to make up ground in the Belmont.
Pletcher also sends out the lone “new shooter” in Overtook, a plodding type who comes off a third in the May 8 Peter Pan (G3) at Belmont. The 20-1 longshot needs to step up from what he’s shown so far, but the royally-bred colt could improve over the distance. Like Known Agenda a son of Curlin, Overtook also adds blinkers that might galvanize him for jockey Manny Franco.
Rombauer sprang an 11-1 upset as a new shooter in the Preakness, but he had more going for him than his odds implied. The Michael McCarthy trainee actually qualified for the Derby, but owner John Fradkin preferred to skip it in favor of the Preakness that suited him better. Fradkin’s judgment proved correct when Rombauer rallied off a hot pace to win decisively at Pimlico, leaving a trio of Derby runners – Midnight Bourbon, first-past-the-post Medina Spirit, and Keepmeinmind – in his wake.
Yet Rombauer wasn’t meeting several Derby principals who passed on the middle jewel to freshen up for the Belmont. Now he’ll be tested by Essential Quality et al. Another question for Rombauer is the pace, which promises to be more restrained than the contentious scenario that set up for him at Pimlico. Indeed, the pace should be similar to the Blue Grass when he was third to Essential Quality.
Rombauer is also facing an historical stat – no horse since Pillory (1922) has turned the Preakness/Belmont double after missing the Derby. On the other hand, Rombauer would have been in the Derby for most other connections, and his new rider, Hall of Famer John Velazquez, will have him well placed in the early going.
While Rombauer aims to follow up on his Preakness performance, Japanese shipper France Go de Ina must engineer a massive turnaround from Baltimore where he tired to seventh. The Preakness could serve as a useful tune-up for the Belmont, but he still has a lot to find on form. In his only other stakes attempt, France Go de Ina was a slow-starting sixth in the UAE Derby (G2) to Rebel’s Romance. The two internationals were to renew rivalry here, until Rebel’s Romance was ruled out with a hind leg infection. If France Go de Ina can pull a surprise with jockey Ricardo Santana, he’d earn the $1 million bonus offered to a Japan-based sophomore who wins the Belmont.
The 11th race on a blockbuster, stakes-laden card, the Belmont is scheduled to go off at 6:49 p.m. (ET). 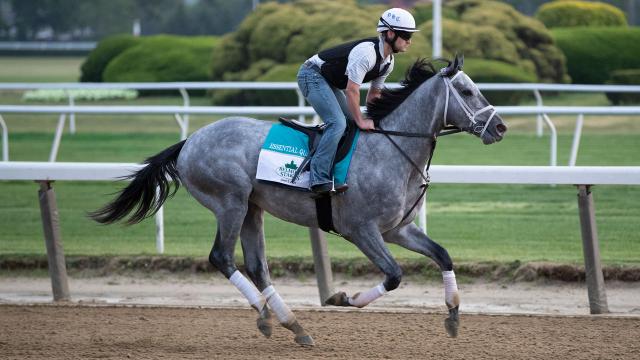