An outstanding field of eight sophomores will go postward in the historic $1.25 million Travers S. (G1) at Saratoga on Saturday. The 153rd running of the event will be held at 1 1/4 miles on the main strip, with a fine cast set to go for the feature.

The Steve Asmussen-conditioned Epicenter was a bit unlucky in both the Kentucky Derby (G1) and Preakness S. (G1) in the spring, but he came back with a sparkling effort when taking the Jim Dandy S. (G2) on the course last time out. He is the Expert Pick of the Week.

Bred in the Bluegrass State, the three-year-old colt aced his local debut and has done little wrong in the interim with a trio of well-spaced morning moves to his credit. The son of Not This Time has an excellent blend of early speed and a sharp turn of foot, and he figures to receive a really good trip while forwardly placed on Saturday. Winchell Thoroughbreds’ color bearer has been consistently excellent following his unplaced debut, and I fully expect him to put in another top effort in the event with regular pilot Joel Rosario in the stirrups.

Preakness S. hero Early Voting faded to fourth late in the Jim Dandy but will be stronger for this tilt in his second start off the layoff. The son of Gun Runner has never run a bad race in his five-race career, and the lightly raced colt has room for improvement, as well. The Kentucky-bred dark bay will be controlling speed in the field and looms a major chance if he is left alone for too long. Jose Ortiz is signed on for the ride for trainer Chad Brown.

Kentucky Derby third Zandon, also from the Brown shedrow, prepped for this with a solid runner-up performance in the Jim Dandy and rates an obvious chance with an expected step forward. The Blue Grass S. (G1) star is a strong late runner who has earned triple-digit Brisnet Speed figures in three straight, and he seems well suited to tackle the 10 furlongs on Saturday. Regular rider Flavien Prat has the call.

An exacta with #6 Epicenter on top of #7 Early Voting and #8 Zandon in the Travers S. is the Best Bet of the Week. 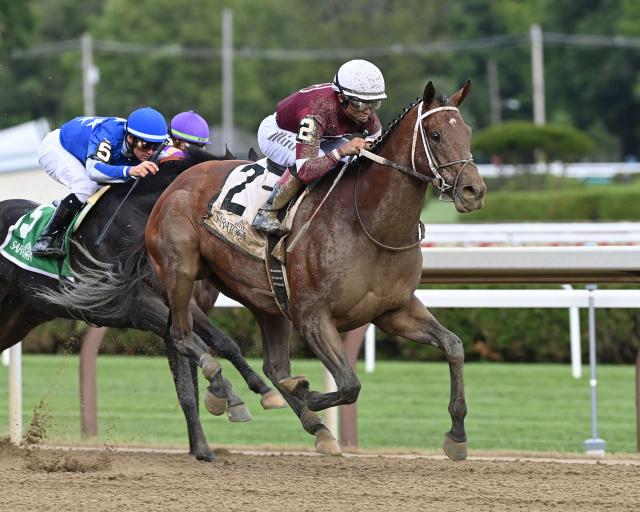