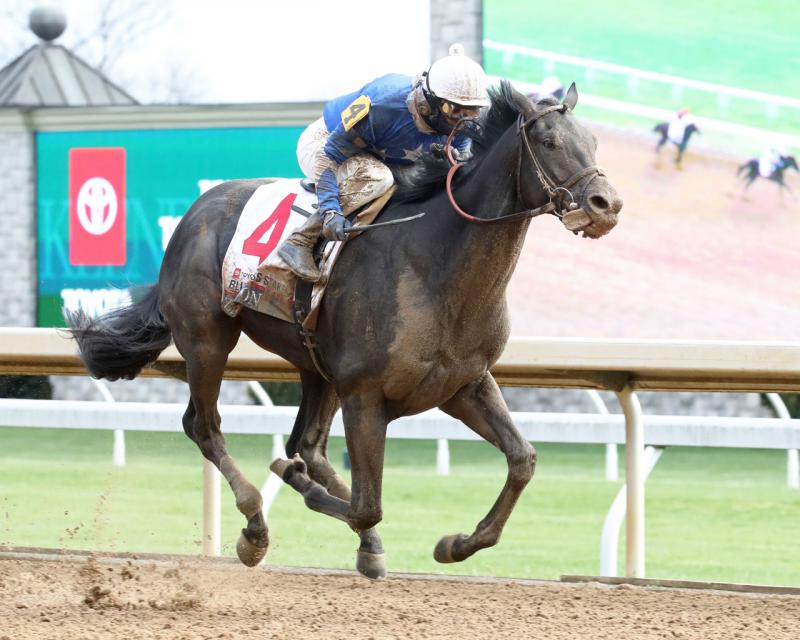 After valiant placed efforts in adversity in last fall’s Remsen (G2) and most recently in the Risen Star (G2) at Fair Grounds, Jeff Drown’s Zandon broke through with a convincing victory in Saturday’s $1 million Blue Grass (G1) at Keeneland. The Chad Brown trainee surged past Smile Happy in deep stretch to bank 100 points toward the Kentucky Derby (G1).

Zandon was the second major prep winner on Saturday to come out of the Remsen. Mo Donegal, who edged Zandon in a no-holds-barred wrestling match in that Dec. 4 event at Aqueduct, rolled late to take the Wood Memorial (G2).

With new rider Flavien Prat aboard for the Blue Grass, Zandon initially appeared poised to settle in midpack. Traffic congestion on the clubhouse turn, though, saw him ease further back. By the time the field entered the far turn, Zandon found himself in last, but had the gears to scythe between rivals as he began to advance.
Meanwhile, 1.90-1 favorite Smile Happy was hung out wide from post 10. Tracking the pace set by Emmanuel and attended by Golden Glider, Smile Happy pounced at the top of the stretch and took command. Yet he couldn’t quite draw off from Emmanuel, who kept doggedly trying on the inside.
Then Zandon exploded with a full of head steam. Muscling his way into the clear and lengthening stride, the 2.10-1 second choice overpowered Smile Happy by 2 1/2 lengths and clocked 1 1/8 miles in 1:50.35. The track, which had been sloppy earlier, was upgraded to good.
Zandon now has a total of 114 points, including four from his tough Remsen near-miss and 10 from a troubled third to Epicenter and Smile Happy in the Risen Star. The dark bay, who won on debut at Belmont Park, has compiled a record of 4-2-1-1, $713,000.
Smile Happy took home 40 additional points, increasing his tally to 70. Emmanuel held third, another 3 3/4 lengths back, to add 20 points for a total of 25. Golden Glider tired to fourth, good for 10 points, and he now has 15 in all. Next came Trademark, Rattle N Roll, Ethereal Road, Commandperformance, Blackadder, Volcanic, and Fenwick. Grantham was scratched.

Zandon was bred by Brereton C. Jones in Kentucky and sold for $170,000 as a Keeneland September yearling. By Upstart, who is also the sire of prominent Kentucky Oaks (G1) contender Kathleen O., Zandon is out of the Creative Cause mare Memories Prevail. The family was celebrating a big-race double since Memories Prevail is a half-sister to Cairo Memories, a dominant winner of the Providencia (G3) on the Santa Anita turf. 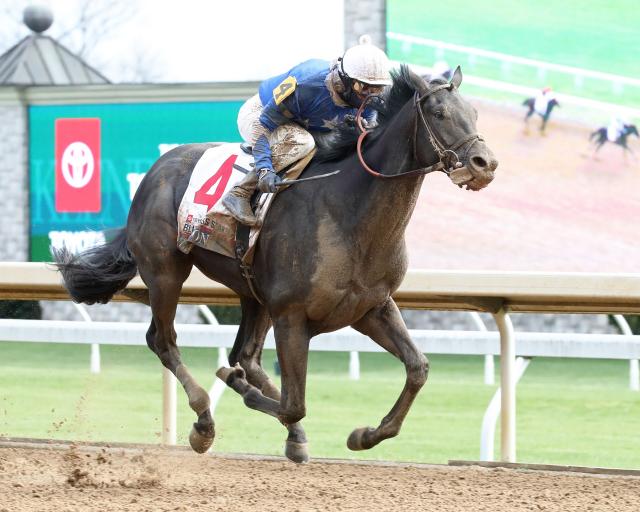