The Charlie Appleby-trained Rebel’s Romance, now 3-for-3 after taking his dirt debut in Dubai, and fellow unbeaten Lemon Pop, second on the Japan Road leaderboard, are chief among the Godolphin internationals.
Here’s a look at the nine foreign-based nominees to the 2021 Triple Crown. With none in Europe, and just two in Dubai, the bulk are in Japan.
Dubai
Rebel’s Romance might have been one for the European classic trail. But as a gelding, he’s not eligible for Europe’s most prestigious events for three-year-olds. That could be the Kentucky Derby’s gain, if he keeps progressing through the Dubai Carnival. Rebel’s Romance has been on a learning curve so far, and Appleby believes that he will get better as an older horse. It’s a matter of whether he can put it all together in time to tackle a jewel of the U.S. Triple Crown.
A homebred by Dubawi, Rebel’s Romance is out of a stakes-placed Street Cry mare from the family of Victoire Pisa, who captured the 2011 Dubai World Cup (G1) on Meydan’s original synthetic surface. Rebel’s Romance showed talent on the all-weather himself in Britain. Despite signs of greenness in his Oct. 26 unveiling at Newcastle, he forged clear. Rebel’s Romance was more polished on Nov. 18 at Kempton. Racing prominently from the start, he powered down the stretch, under top weight of 135 pounds, to score by four lengths.
Rebel’s Romance proved that he handles dirt in his Meydan debut in the Jan. 14 UAE 2000 Guineas Trial. Under confident handling by regular rider William Buick, he held Mouheeb who made it close late. Mouheeb paid him a compliment by coming back to win Thursday’s UAE 2000 Guineas (G3).

Aiming next for the Feb. 20 Saudi Derby on Saudi Cup Day, Rebel’s Romance will be a key player for the Mar. 27 UAE Derby (G2), a 170-point race that counts toward the main leaderboard. His biggest obstacle could be another Godolphin runner, filly Soft Whisper, who trounced the Jan. 28 UAE 1000 Guineas. Soft Whisper is not Triple Crown-nominated; trainer Saeed bin Suroor said she’d be made eligible for the Kentucky Oaks (G1) as well as the European classics.

The second Triple Crown nominee at the Dubai Carnival is Charles Fipke’s homebred Speight’spercomete, a maiden on the upswing for Doug Watson. After a slow-starting 11th in his educational debut in a Meydan sprint, he took a step forward to finish fifth going a metric mile. Speight’spercomete appreciated the stretch-out in the about 1 3/16-mile Al Bastakiya Trial Jan. 28 and turned in his best effort so far. Although posted out wide throughout, he stayed on well for second to Uruguay’s multiple stakes scorer El Patriota.

Undefeated Alain Barows leads at the halfway mark on the Japan Road, thanks to the 20 points from his front-running romp in the Dec. 16 Zen-Nippon Nisai Yushun. Trained by Masato Hayashi, the Koji Inokuma colorbearer used his speed to maximum effect beneath the lights at Kawasaki.

Alain Barows has aced all five starts on the local (NAR) circuit, but that means he’s yet to race at one of the major Japanese tracks. Either of the two remaining Japan Road races – the Feb. 21 Hyacinth at Tokyo and Mar. 27 Fukuryu at Nakayama – would give us a better read on him.

By Henny Hughes, Alain Barows needs to draw upon the stamina of broodmare sire Stay Gold, a Group 1-winning son of Sunday Silence, to be as effective beyond a mile.

Godolphin’s Lemon Pop captured the Japan Road opener worth 10 points to the winner, the Nov. 28 Cattleya Stakes, to go 2-for-2. Both of his races have come at Tokyo, where he drove to a three-length debut score Nov. 7. The Hiroyasu Tanaka trainee employed a similar stalking trip in the Cattleya, but had to reel in a tougher pacesetter in Takeru Pegasus to prevail. In both races, Lemon Pop recorded strong closing fractions, posting :35.6 for the final three furlongs in his sprint premiere and :36.8 over the Cattleya’s metric mile.

Kentucky-bred Lemon Pop, a $70,000 Keeneland November weanling, is bred to stay being by 1999 Belmont (G1) hero Lemon Drop Kid and out of a Giant’s Causeway mare. But he gets some zip from his second dam, Harpia, a Grade 3-winning full sister to Danehill. Given his proficiency around Tokyo, the Hyacinth would be a logical comeback spot. Note that Lemon Pop is also nominated to the UAE Derby.

Godolphin colleague Whole Shebang is 2-for-3 on dirt for trainer Yoshitada Takahashi. The homebred from Darley Japan was a distant third in a Sept. 13 newcomers’ race at Nakayama, but moved forward to win his next two over the same about 1 1/8-mile trip. His five-length maiden win at Niigata was more workmanlike than the margin implies, and he looked sharper when sweeping to a 25-1 upset in a Hanshin allowance. Last time, Whole Shebang took an audacious stab on turf in the Dec. 26 Hopeful (G1), and his 183-1 odds proved about right as he faded to 11th in the 15-horse field.

Whole Shebang is by 2008 Louisiana Derby (G2) winner Pyro and out of a mare who captured a race that subsequently became part of the Japan Road. His dam, Someries (by 2007 Derby runner-up Hard Spun), beat males in the 2012 Zen-Nippon Nisai Yushun.

Hideyuki Mori, the first Japanese trainer to try the Derby with Ski Captain (14th in 1995), has a pair of Kentucky-bred nominees.

Yuji Inaida’s France Go De Ina has the better resume of the two. Since his fourth to Lemon Pop in their mutual debut in a sprint, he’s romped twice going about 1 1/8 miles at Hanshin. France Go De Ina controlled the pace in his Nov. 28 maiden and stalked the leader in his Dec. 19 allowance.

As a son of champion Will Take Charge and a Curlin mare, France Go De Ina improved on the step up in trip. The Saudi Derby is reportedly on his radar, and it’s worth remembering that Mori won last year’s inaugural with Full Flat.

Stablemate Jasper Dream cost slightly more as a Keeneland September yearling, bringing $125,000 to France Go De Ina’s $100,000. The Speightstown colt is also out of a Curlin mare, Liberated, who was third in the 2012 Golden Rod (G2) at Churchill Downs.

Owned by Kazuo Kato, Jasper Dream was unplaced in his first two, an Oct. 25 newcomers’ event on the Kyoto turf and in a Nov. 14 dirt maiden at Hanshin. But he turned the page in his sophomore bow at Chukyo Jan. 11, forcing the pace before pulling away in the stretch. Flopping when wheeling back for the Jan. 23 Wakagoma on a yielding turf, Jasper Dream could regain his momentum on dirt.

Vanishing Point looked like he could be top-caliber himself when romping in an Aug. 2 newcomers’ race at Sapporo. Gliding to the early lead in the about 1 1/4-mile affair on turf, the gray revealed his immaturity by switching leads several times throughout, and generally giving off a green vibe. None of that detracted from his total command of the opposition, though, as the 4-5 favorite. Vanishing Point opened up by seven lengths, reeling off his final three furlongs in :35.8, while appearing to have untapped reserves.

That Vanishing Point has vanished in his ensuing starts. Not seen again until the Oct. 24 Ivy S. at Tokyo, he was favored to follow up at 7-5, only to retreat to seventh. Vanishing Point was backed to rebound on a switch to dirt, and adding headgear, in the same Hanshin allowance won by Whole Shebang. But he clearly had problems dealing with the kickback, his head up in the air early and climbing so noticeably as to be more leaping than galloping, and wound up 12th. A return to turf hasn’t helped either. Vanishing Point was beaten double-digits in the aforementioned Hopeful and in a Jan. 5 allowance over the same Nakayama course and distance. In both cases, he likely frittered away too much energy early before giving way, suggesting that the mental part of the game is his stumbling block.

Nobutaka Tada’s La Perouse, by Pelusa (a lesser grandson of Sunday Silence) and out of an Empire Maker mare, is a three-time winner. After a forgettable 15th of 16 in his unveiling on the Tokyo turf last summer, he was transferred to Hokkaido trainer Nozomi Ono, and resurfaced on the dirt at Mombetsu.

Improving on that NAR track, La Perouse rallied to break his maiden promptly Sept. 17. He should have won on Oct. 6 as well, if not for blowing the start. Uncorking a sustained run from last, with a closing sectional of :36.3, La Perouse missed by just a half-length. He made no mistake on Oct. 22, when the combination of blinkers and a step up to about 1 1/16 miles added up to a nine-length rout, under wraps.

La Perouse earned his way back to Fujisawa at the JRA level. Overlooked at 18-1 since he was coming from Mombetsu, he confirmed his progress to take a Dec. 13 allowance at Nakayama handily.

15th JRA in June on Turf, then won two at Monbetsu in summer, then this...pic.twitter.com/Ab17K1vla2

Nominated for the Saudi Derby, La Perouse also holds a UAE Derby entry. Most of the Japanese-based Triple Crown nominees are engaged in Dubai, except for Alain Barows and Vanishing Point. 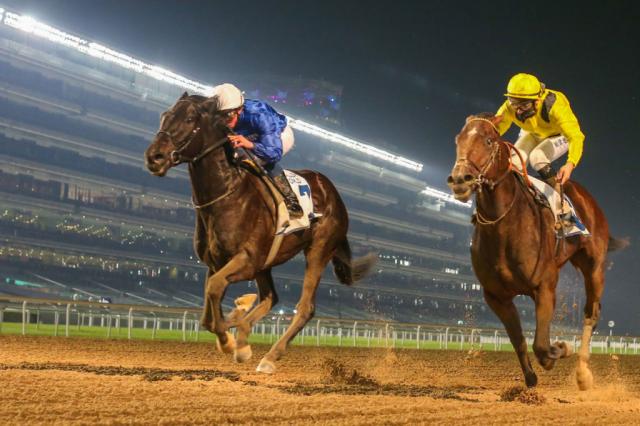