Hofburg could 'Tap' into a Belmont Stakes victory over Justify

Frosted (Coglianese Photos)
Can Woody Stephens and Tapit provide clues on Hofburg and Justify in the Belmont Stakes?

As Woody Stephens was to trainers in the 1980s, so it appears Tapit is to stallions in the 2010s when it comes to being a dominating figure in the Belmont Stakes (G1).

In the last four editions of the Belmont, Tapit has sired winners Tonalist (2014), Creator (2016), and Tapwrit (2017). It took the sport’s first Triple Crown winner in nearly four decades, American Pharoah, to prevent the streak from standing at four in a row as Frosted was a clear-cut second in 2015. (Tapit also sired 2016 third-place finisher Lani).

Tapit’s current dominance echoes that of 16-time leading sire Lexington, “The Blind Hero of Woodburn,” who in the five-year period from 1868 through 1872 was responsible for three Belmont winners and one third-place finisher.

On June 9, Tapit’s son Hofburg will attempt to do what Tonalist did and Frosted didn’t – halt a Triple Crown bid. Four Belmont Stakes wins in five years for Tapit is not out of the realm of possibility.

Tapit had a relatively short career in 2003-04 winning three of six starts, including the Wood Memorial (G1) and Laurel Futurity (G3). Though unplaced in the Kentucky Derby (G1), Florida Derby (G1), and Pennsylvania Derby (G2), Tapit’s success at stud was instantaneous as he sired champion juvenile filly, Stardom Bound, in his first crop. He hasn’t looked back.

While obviously gifted at siring winners of the country’s longest Grade 1 dirt stakes, Tapit’s present stud fee of $300,000 is proof his offspring have done and can do pretty much everything. Though the Kentucky Derby and Preakness (G1) have eluded him, Tapit has sired four U.S. champions and a plethora of Grade 1 winners going short and long, on turf as well as dirt.

Hofburg seeks to become the latest top-level winner for the super stallion. Like Tonalist, Hofburg will be making his fifth career start in the Belmont. Both raced once at two, finishing fourth in their debuts, then ran three more times prior to the “Test of the Champion.”

Owner Juddmonte Farms is seeking its second Belmont with Hofburg after Empire Maker earned a Triple Crown-busting win against Funny Cide in 2003. Trainer Bill Mott, likewise, won his only Belmont with Drosselmeyer in 2010, and jockey Irad Ortiz Jr. was aboard for Creator’s score two years ago.

Justify will be tough to beat, for sure, but no horse is entering the race with more Belmont momentum than Tapit.

Get to know the Belmont Stakes contenders. 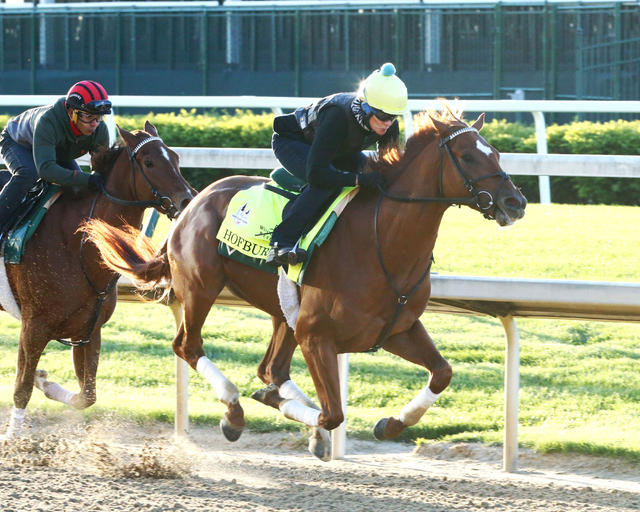