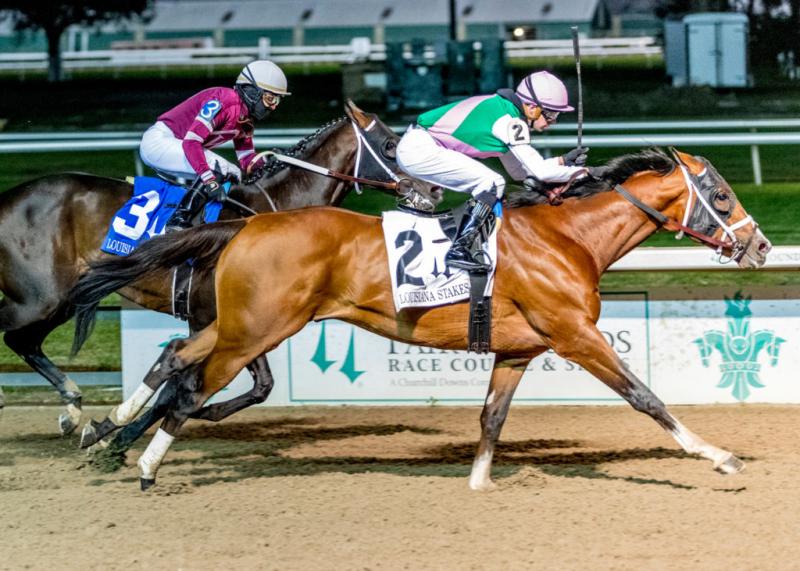 Mandaloun wore down familiar foe Midnight Bourbon in the Louisiana (G3) (Hodges Photography/Lou Hodges Jr.)
As the winter racing season continues, the racing calendar for the Derby and Oaks alumni is getting more exciting. From allowance-level returns to globetrotting adventures, it’s time to check in with the latest runners!
● Mandaloun (2nd across the wire, 2021 Kentucky Derby) and Midnight Bourbon (6th, 2021 Kentucky Derby) clashed in the Louisiana S. (G3) on Jan. 22. For Mandaloun, it was his first race since being promoted to the win in the Haskell (G1) last July; for Midnight Bourbon, it was his first start since running third to Maxfield in the Clark (G1) in November. Into the lane it was the clash horse racing fans hoped to see, with Mandaloun the only one looming in range of pacesetter Midnight Bourbon. Mandaloun had just a little more in the late stages, wearing down Midnight Bourbon to take the race by three quarters of a length. They were much the best; third-place Warrant got home another eight lengths back.
● Pauline’s Pearl (8th, 2021 Kentucky Oaks) got a confidence-builder when winning the Zia Park Oaks in November. Jan. 30, she returned to graded company and faced older for the first time in the Houston Ladies Classic (G3). Sent off the 3-5 chalk in a field of seven, she was in traffic into the first turn, but soon worked a good tracking spot off the pace set by joint second choice The Mary Rose. Clearly third down much of the backstretch, she kicked on three deep around the far turn and then rolled clear of longshot Golden Curl in the final furlong, winning by 3 3/4 lengths in the end.
● Sole Volante (11th, 2020 Kentucky Derby), drawn toward the outside in the W. L. McKnight (G3) at Gulfstream on Jan. 29, started near the rear of the pack, as normal. With about a mile to go in the 12-furlong race, he had made his way to near midfield, and continued patiently from there. He made a mild gain under urging the second time around the far turn. He chased on well enough to round out the superfecta, crossing the wire, four lengths behind the clear winner Abaan.
● On Jan. 28, Gray Magician (19th, 2019 Kentucky Derby) made his first start since closing weekend at Del Mar. Set off at 35-1, the longest shot in the open $40,000 claiming dirt mile, he was compromised after hopping at the start and getting off slowly. He took closer order into the lane, but ultimately never threatened. He finished seventh of eight, five lengths adrift of winner Proverb.
● Pass the Champagne (12th, 2021 Kentucky Oaks) returned in fine form on Feb. 3, making her first start since the Kentucky Oaks last year. Facing a field of eight in a seven-furlong, second-level allowance, Pass the Champagne was sent off the 3-5 favorite and she ran to it. Used a bit early to get up to third behind a speed duel, she engaged three wide around the far turn, opened up from upper stretch, and held comfortably to win by 2 3/4 lengths over the chasing Only Kidding.
● Hot Rod Charlie (3rd across the wire, 2021 Kentucky Derby), most recently nosed out in the San Antonio (G2), will prep for the Dubai World Cup (G1) with a spin over the Meydan course on Feb. 4 in the Al Maktoum Challenge Round 2 (G2). Drawn in stall 3 of the 12-horse field, he faces a field that includes former U.S. horses Quip and Everfast, last-out stakes winner For the Top, and Dubai Carnival stalwart New Trails.
● Coach (9th, 2021 Kentucky Oaks), a cozy winner of the Pippin S. at Oaklawn last month, returns in the next older mare dirt route stakes in Hot Springs. She entered the Bayakoa (G3), originally scheduled for Feb. 5, though due to inclement weather it will be run on Saturday, Feb. 12 instead.
● Soup and Sandwich (19th, 2021 Kentucky Derby), last seen running ninth in the Perryville S. at Keeneland last October, returns to allowance company Feb. 5. He drew the 8 gate in a seven-furlong race at Gulfstream, which drew a field of 12 plus one also-eligible entrant. The gray has been strong at Gulfstream so far; he broke his maiden on debut over the course in January 2021, and also finished second in the Florida Derby (G1). 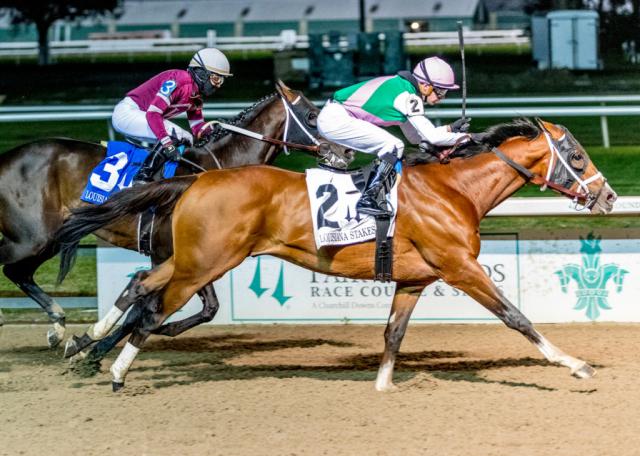