Koichi Nishikawa’s Cafe Pharoah earned 30 points on the 2020 Japan Road to the Kentucky Derby following his superb 1 1/4-length score in the Hyacinth S. at Tokyo Racecourse in Japan. The exciting colt finished off the 1,600-meter test in a snappy 1:37.70 beneath Mirco Dimuro.

Trained by Noriyuki Hori, the 3-year-old was unveiled on December 14 at Nakayama Racecourse and went postward as the even-money choice in a 14-horse field. Breaking alertly, the son of Triple Crown superstar American Pharoah justified his odds when leading throughout en route to a 10-length romp.

Cafe Pharoah broke awkwardly in the Hyacinth and trailed the field early on while making his second lifetime appearance. The Kentucky-bred sophomore showed his versatility and oozed his class when picking off horses approaching the stretch, and he sustained his run through the wire to notch his initial black-type victory.
The winner was bred in Kentucky by Paul Pompa, and he brought a final bid of $475,000 at the 2019 OBS March Two-Year-Olds in Training Sale. The colt is the third stakes winner produced from the Grade-2 winning More Than Ready mare Mary’s Follies, following the success of 2019 Lake Placid (G2) queen Regal Glory and 2015 Transylvania (G3) and Dania Beach (G3) victor Night Prowler. He also has an unnamed 2-year-old half-brother by Uncle Mo, as well as an unnamed yearling half-brother by Candy Ride.
Cafe Pharoah has been super impressive in both lifetime appearances to date and gives the look of a fine prospect. While his stakes-winning siblings have prospered on the turf, he has proven to be more than capable on conventional dirt at this stage of his development. If Cafe Pharoah continues to progress in his native land and comes to the U.S. this spring, then the youngster might evolve into a legitimate contender for the Triple Crown races.
The Fukuryu S. at Nakayama on March 28, which is the last leg on the 2020 Japan Road to the Kentucky Derby challenge series, could be the next assignment for Cafe Pharoah. 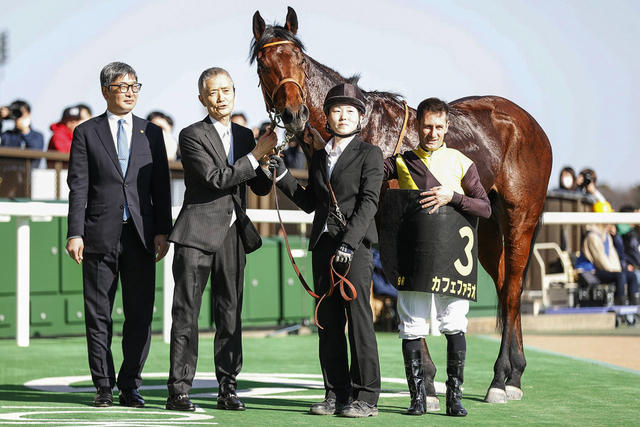