Roadrunner Racing, Boat Racing, and William Strauss’ Hot Rod Charlie picked up 100 points on the 2021 Road to the Kentucky Derby series following his two-length victory in the $1 million TwinSpires.com Louisiana Derby at Fair Grounds on March 20. The winner endured 1 3/16 miles on the fast main surface in 1:55.06 with Joel Rosario in the stirrups.

Hot Rod Charlie debuted on July 11 at Del Mar and finished fourth in a five-furlong dash on the dirt. The colt raced twice on the turf following his initial assignment, finishing third and fifth in the process. He broke his maiden in his fourth career engagement, taking a one-mile maiden special weight race on the move back to the dirt at Santa Anita on Oct. 2.

The son of Oxbow went right to the Breeders’ Cup Juvenile (G1) in his first start with winners and finished a superb runner-up while going off at 94-1. The dark bay sophomore kicked off his three-year-old campaign with a close third in the Robert B. Lewis S. (G3) at Santa Anita on Jan. 30.

Hot Rod Charlie was produced from the Indian Charlie mare Indian Miss, and he counts himself as a half-brother to champion sprinter Mitole, who impressively captured the 2019 Breeders’ Cup Sprint (G1) during his brilliant season.

Hot Rod Charlie has shown vast improvement since adding blinkers and stretching out to route racing, posting Brisnet Speed figures of 84-100-93-96 following the equipment change. He has shown the versatility to run well from off the pace, as he did in the Breeders’ Cup, or on the front end like he raced at Fair Grounds most recently. He is in very good hands with multiple Kentucky Derby-winning conditioner Doug O’Neill, and he could be rounding up to a peak performance at Churchill Downs on May 1. 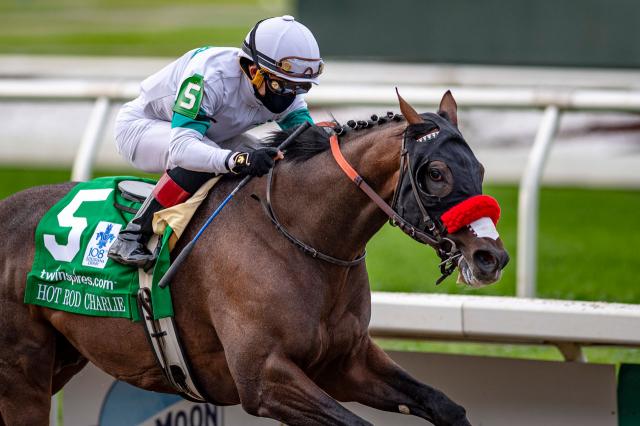