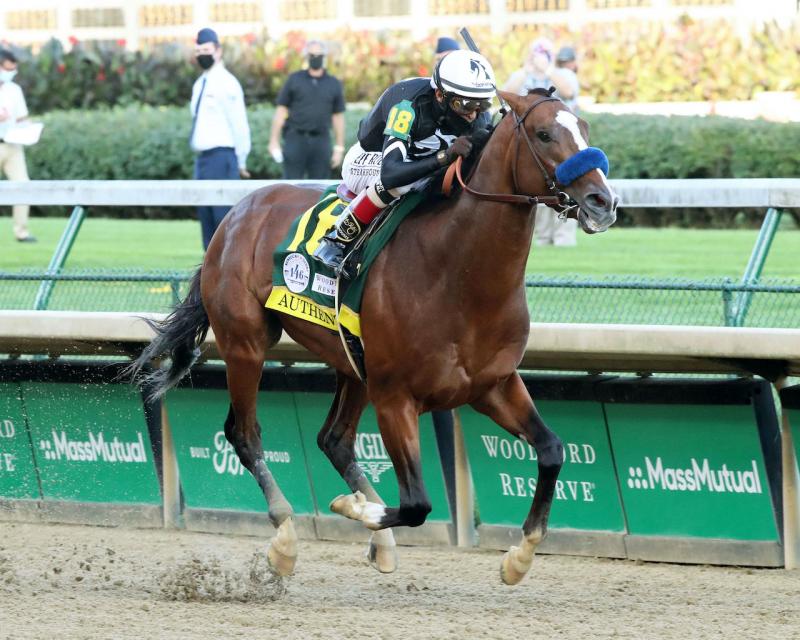 Kentucky Derby (G1) winner Authentic has been retired from racing after capping his 2020 campaign on Saturday with a wire-to-wire victory in the Breeders' Cup Classic (G1) at Keeneland. He will stand for a fee of $75,000 at B. Wayne Hughes' Spendthrift Farm, which co-owns the son of Into Mischief with MyRaceHorse Stable, Madaket Stables, and Starlight Racing.

"Authentic is a once-in-a-lifetime kind of horse, and Mr. Hughes is very proud that we are able to share him with 5,300-plus MyRacehorse owners through what has been an incredible run. That alone made this decision different and very difficult," said Ned Toffey, general manager of Spendthrift.

"Ultimately, we just felt there wasn't a lot more to accomplish for a Kentucky Derby and Breeders' Cup Classic winner, so we have made the decision to retire Authentic to stand alongside his champion sire Into Mischief."

Authentic won six times and finished second twice from eight starts and retires with career earnings of $6,191,200. A winner of his first three starts, including the Sham (G3) and San Felipe (G2), Authentic tasted defeat for the first time when second in the Santa Anita Derby (G1) in June.

He bounced back with a narrow score in the Haskell (G1) the following month, and then gave Hall of Fame trainer Bob Baffert a record-equaling sixth victory in the Kentucky Derby on Sept. 5, scoring by 1 1/4 length under John Velazquez.

Although a neck second to the filly Swiss Skydiver in a thrilling renewal of the Preakness (G1) in early October, Authentic proved best in Saturday's Classic in his lone start against older runners. He won by 2 1/4 lengths in track-record time of 1:59.19 for 1 1/4 miles.

Authentic is a slam dunk to be named champion three-year-old male and figures as the heavy favorite in Horse of the Year balloting as well.