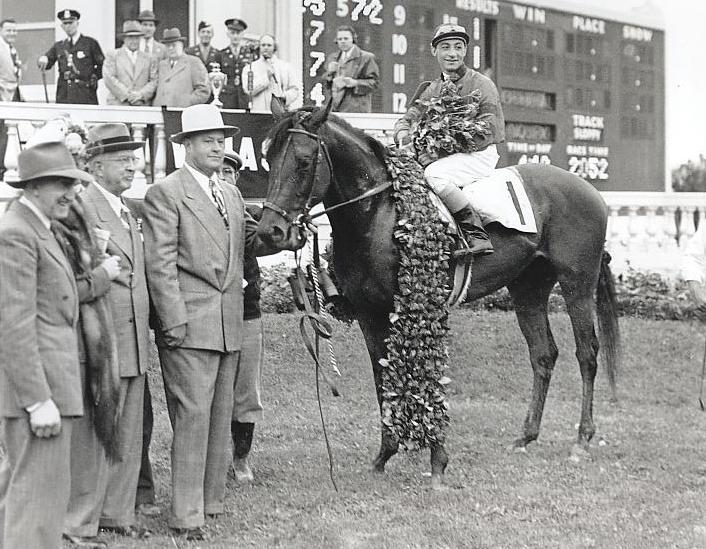 From the trailblazing Sir Barton, who scored before the races were recognized as a series to sweep, to the latest hero Justify, here are three things to know about each of the Triple Crown winners:

Winless going into the Kentucky Derby, Sir Barton led throughout in a five-length romp over highly regarded stablemate Billy Kelly.

In between his Preakness and Belmont victories, the speedy colt added the Withers to make it a four-race winning streak in total.

Sir Barton developed into a leading older horse of 1920, but was no match for 3-year-old phenom Man o’ War in their famous match race at Kenilworth Park.

The Preakness came before the Derby in 1930, so the aristocratic Gallant Fox justified favoritism at Pimlico on the way to flaunting his class at Churchill Downs.

His seven-race winning skein was snapped in a Travers that became part of Saratoga lore. Upset by the 100-1 shot Jim Dandy on a heavy track, Gallant Fox suffered the only loss of his 3-year-old campaign.

Gallant Fox achieved a feat that no other Triple Crown champion has managed: he sired a Triple Crown winner, Omaha.

Like his sire, Omaha was also a William Woodward homebred trained by “Sunny Jim” Fitzimmons, who became the first owner/trainer tandem to celebrate a pair of crowns.

Unlike his sire, Omaha didn’t bring as compelling a resume into the Derby, where the filly Nellie Flag went off as the favorite. But he was just reaching his peak as he rolled to victory from well off the pace.

As a 4-year-old, Omaha continued his career in Great Britain under Capt. Cecil Boyd-Rochfort. Although he won his first two starts on the turf, he’s more often remembered for his photo-finish loss in the Gold Cup at Royal Ascot, just denied by the classic-winning filly Quashed in a thriller.

Nicknamed the “The Mighty Atom,” the small, dark bay War Admiral looked nothing like his brawny chestnut sire Man o’ War, but he was his worthiest son.

War Admiral wired all three jewels of the Triple Crown during a perfect 8-for-8 season, his finest hour coming in the Belmont. Despite slicing his foot badly leaving the gate, War Admiral beat his sire’s 1 1/2-mile track record when clocking 2:28 3/5.

While War Admiral captured more majors as a 4-year-old, one of his rare losses proved most enduring: Seabiscuit beat him to the lead, and repelled him, in their famous match race of 1938 at Pimlico.

“Mr. Longtail,” a fan favorite thanks to his thrilling rallies and mercurial penchant for making a beeline to the outside fence, was the first Triple Crown winner who had been a co-champion 2-year-old.

Whirlaway crushed the Kentucky Derby by a record-tying margin of eight lengths, and in then-record time of 2:01 2/5, and went on to become the only Triple Crown winner to prevail in the Travers.

Also the first Triple Crown champion to repeat as Horse of the Year as a 4-year-old, Whirlaway served on the home front in World War II, his 22-race 1942 campaign proving a real fundraiser for war relief efforts.

A headstrong individual who wanted to run his rivals off their feet, Count Fleet posted a then world-record time for a 2-year-old in the 1942 Champagne, zipping a mile at Belmont Park in 1:34 4/5.

“The Fleet” was unbeatable for the rest of his brief career, reeling off 10 straight and becoming the only Triple Crown winner aside from Sir Barton to win the Withers in between jewels.

Count Fleet’s streak culminated in a 25-length Belmont rout in 2:28 1/5 – a record margin and time in his day – despite sustaining an injury and never racing again.

The “Clubfooted Comet” earned his nickname from a paddock accident as a weanling, when he impaled his right front foot on a surveyor’s stake. For the rest of his life, Assault looked unsound at his slower paces, but not in full flight.

The first Triple Crown winner born outside Kentucky, the pride of Texas’ famed King Ranch sprang an 8-1 upset in the Derby, equaling the record margin of eight lengths.

Assault was retired to stud after his form declined as an older horse, but after turning out to be sterile, he returned to training and won the 1949 Brooklyn Handicap.

“Big Cy” had the same connections as Whirlaway – as a Calumet Farm homebred trained by Ben Jones (with instrumental help from son Jimmy) and ridden by Eddie Arcaro – but was a completely different type as the ultra-professional pinnacle of their historic operation.

A nearly invincible champion at two and three, winning 27 of 29 in his first two seasons of racing, Citation dusted his future Hall of Fame stablemate Coaltown in the 1948 Derby.

Citation missed his entire 4-year-old season with physical issues, but returned triumphant at five to notch his 16th straight win, and at six became the first horse to surpass $1 million in earnings.

An historical rarity to be voted Horse of the Year at two, Secretariat was syndicated as a future stallion for a then-record $6.08 million before his 3-year-old campaign.

Secretariat swept the Triple Crown while establishing record times that still stand for each race – the Derby in 1:59 2/5, the Preakness in 1:53, and the Belmont by the largest-ever margin of 31 lengths in an astonishing world-record of 2:24.

The Virginia-bred, variously dubbed “Big Red” like Man o’ War or even “Super Red,” concluded his career with two superb displays on turf to become the only Triple Crown winner hailed as champion grass horse as well.

The first Triple Crown winner to be sold at public auction, Seattle Slew brought $17,500 as a yearling at Fasig-Tipton Kentucky July.

The champion 2-year-old colt of 1976 was also the first horse to go unbeaten through the Triple Crown, only to lose his perfect record when reappearing too quickly after the Belmont.

Returning as a 4-year-old, Seattle Slew enhanced his historical reputation by reigning as champion handicap male and beating his successor to Triple Crown glory, Affirmed.

The Florida-bred star is forever linked with his archrival Alydar, whom he bested for champion 2-year-old honors and repelled, with increasing drama, in each jewel of the Triple Crown, climaxing in their prolonged Belmont duel.

Affirmed lined up against Seattle Slew twice – the only clashes between Triple Crown winners in history – and lost both but took Horse of the Year honors.

Improving as an older horse in 1979, Affirmed became the first Triple Crown winner since Whirlaway to be voted Horse of the Year again at four.

The champion 2-year-old male of 2014, American Pharoah posted a workmanlike effort in the Derby, but stellar front-running displays in the Preakness and Belmont to end the 37-year Triple Crown drought.

“Pharoah” brought an eight-race winning streak into the Travers, only to suffer a shock defeat at the hands of Keen Ice. Thus Saratoga added to its legacy as the graveyard of champions.

Justify pressed a fast pace in the slop at Churchill Downs (becoming the first Derby winner to start his career at three since Apollo in 1882), survived intense pressure in similar conditions in the Preakness, and held sway comfortably with no early challenge in a fast-track Belmont.

Retired due to an ankle problem, Justify is the only Triple Crown winner to remain unbeaten, albeit with the fewest races (six).

Read more about the Triple Crown winners in their pedigree fun facts! 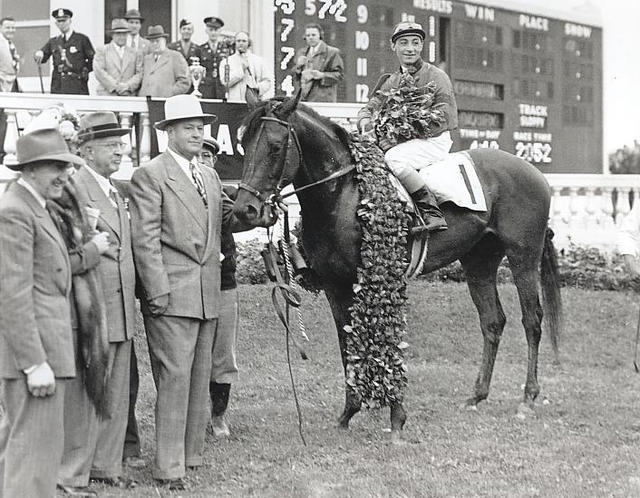