Jan 11, 2022 Kellie Reilly/Brisnet.com
Tweet
The highly-regarded Not This Time was retired with an injury before getting an opportunity to shine on the 2017 Triple Crown trail, but the well-bred stallion is making his presence felt on the 2022 Road to the Kentucky Derby.

Epicenter became the first son of Not This Time to make the Derby leaderboard with his impressive score in the Dec. 26 Gun Runner S. at Fair Grounds. Two other stakes winners – Simplification and Howling Time – could join the party in upcoming points races.

It’s fitting that Epicenter won the race named in Gun Runner’s honor because his pedigree is a mirror image of that 2017 Horse of the Year. While Gun Runner is by Candy Ride and out of a Giant’s Causeway mare, Epicenter represents the reverse cross of Giant’s Causeway over a Candy Ride mare.
Not This Time is a son of Giant’s Causeway, a male-line descendant of breed-shaping patriarch Northern Dancer, via the Storm Cat branch. Giant’s Causeway remains one of the all-time greats trained by Aidan O’Brien, thanks to an historic sweep of five Group 1 races in the summer of 2000. The “Iron Horse” also came close to taking the Breeders’ Cup Classic (G1), but Tiznow outdueled him in a vintage renewal at Churchill Downs.

Giant’s Causeway developed into a sire of global import, with such European classic winners as Shamardal (a major stallion in his own right) and U.S. Horse of the Year Bricks and Mortar. His progeny have placed in all three jewels of the Triple Crown. Destin came closest in the 2016 Belmont (G1), while Creative Cause and Mr. Big News were third, respectively, in the 2012 Preakness (G1) and 2020 Kentucky Derby.

Not This Time had the credentials to make an impact on the Triple Crown. The 2016 Iroquois (G3) romper missed by a neck to champion Classic Empire in the Breeders’ Cup Juvenile (G1). Unfortunately, he came out of that race with a soft-tissue injury that ended his career.
Not This Time’s dam, Miss Macy Sue, herself placed in the Breeders’ Cup when third in the inaugural Filly & Mare Sprint in 2007. A Grade 3 heroine who bankrolled $880,915, Miss Macy Sue won or placed in a total of 13 stakes. She’s followed up her racetrack exploits by becoming an outstanding broodmare. In addition to Not This Time, she has produced Liam’s Map, the 2015 Breeders’ Cup Dirt Mile (G1) star and a successful young sire, along with graded-caliber runners Taylor S and Matera.

Miss Macy Sue is by the brilliant sprinter Trippi, who carried his speed as far as 1 1/8 miles in the 2000 Flamingo (G3). After tiring to 11th behind Fusaichi Pegasus in the Kentucky Derby, however, Trippi stuck to his one-turn wheelhouse and notably beat elders in the Tom Fool H. (G2) and Vosburgh (G1). 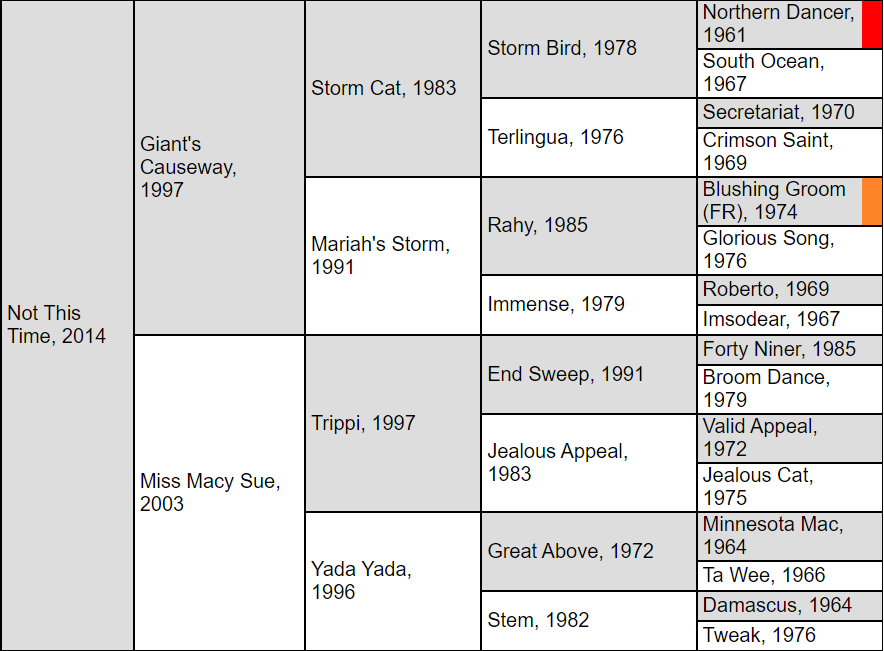 Epicenter’s dam, Silent Candy, spent most of her career on turf. She scored her signature win in the 2010 Hatoof S. and placed third next time out in the Pucker Up (G3), both at Arlington.

Silent Candy’s sire, Candy Ride, was unbeaten on both dirt and turf, from his native Argentina to the United States. The champion miler in his homeland with three runaway Group 1 wins, Candy Ride added the 2003 American H. (G2) at old Hollywood Park and the Pacific Classic (G1) in track-record time at Del Mar.

Silent Candy’s turf preference likely comes from her dam, Silent Queen, whose parents were both Irish-breds. Silent Queen is by King of Kings, hero of Newmarket’s classic 2000 Guineas (G1) in 1998. A son of supersire Sadler’s Wells, King of Kings is out of a mare by the outstanding miler Habitat. Since Silent Queen also counts Habitat as an ancestor on her dam’s side, she is inbred to that notable sire.

Silent Queen’s dam, Soundproof, is a daughter of champion Ela-Mana-Mou, whose major wins include the 1980 Prince of Wales’s (G2) at Royal Ascot, Eclipse (G1), and King George VI & Queen Elizabeth (G1). Ela-Mana-Mou was known for imparting stamina. His leading progeny include the great stayer Double Trigger, winner of Royal Ascot’s Gold Cup (G1) and an incredible three-peater in the Goodwood Cup (G2). 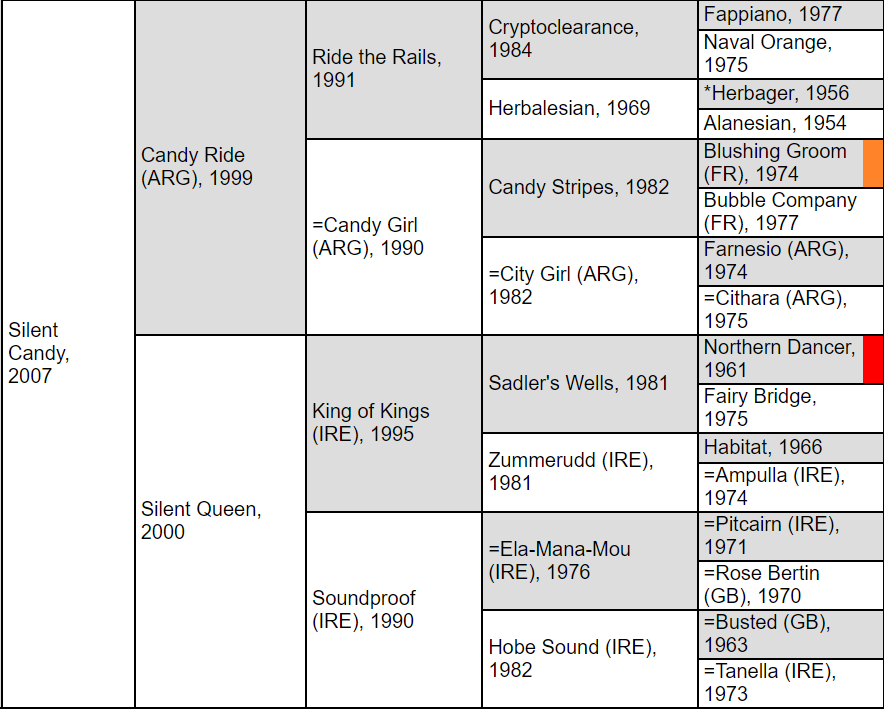 Soundproof’s dam, Hobe Sound, is by champion Busted, who also turned the Eclipse-King George double in 1967 and became influential at stud. One of Busted’s granddaughters, Wind in Her Hair, is famous for producing Japanese phenom Deep Impact.
Hobe Sound’s dam, Tanella, is by the aforementioned Habitat and out of the stakes-placed Nanette, who is also responsible for 1977 Ribblesdale (G2) winner and Irish Oaks (G1) third Nanticious. Another daughter of Nanette, Repetitious (a full sister to Nanticious), produced multiple Group 1 victor Indian Lodge.
Nanette’s sire, *Worden, shipped in to plunder the 1953 Washington D.C. International. *Worden had placed in that year’s Prix de l’Arc de Triomphe as well as in back-to-back runnings of the King George. Nanette’s dam, stakes-winning Claudette, produced the accomplished filly *Bamboozle, and she also factors as the ancestress of the high-class miler Derring-Do.
Claudette is a daughter of French champion Chanteur II and Nearly, the third-placer in the 1942 Middle Park. Nearly is by the all-time great Nearco, an unbeaten superstar on the racecourse and at stud.
Nearco is also the sire of Nearly’s three-quarter siblings – 1951 Epsom Oaks winner Neasham Belle; 1958 Ribblesdale and Yorkshire Oaks heroine None Nicer, second in the St. Leger; Narrator, winner of the 1954 Champion S. and 1955 Coronation Cup; and 1947 Oaks runner-up and influential matron Netherton Maid.

Epicenter hails from the 21-a family. Two Kentucky Derby winners trace to the same taproot mare – Plaudit (1898) and Whiskery (1927). While Whiskery was directly descended from Plaudit’s dam, their connection to Epicenter is remote. You have to go back more than two centuries to find their common ancestress, Wagtail (foaled in 1818), who established the 21-a tribe. 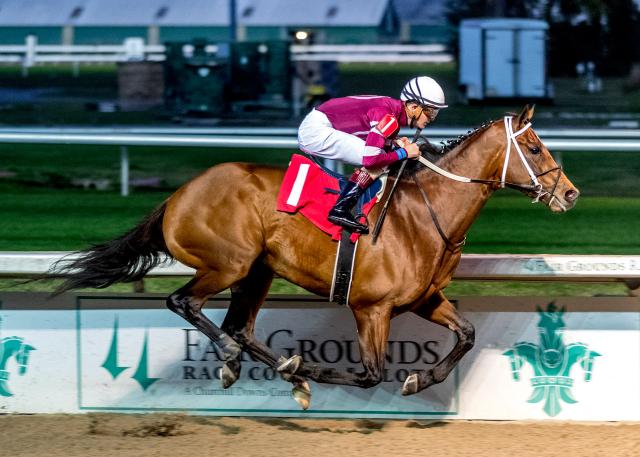