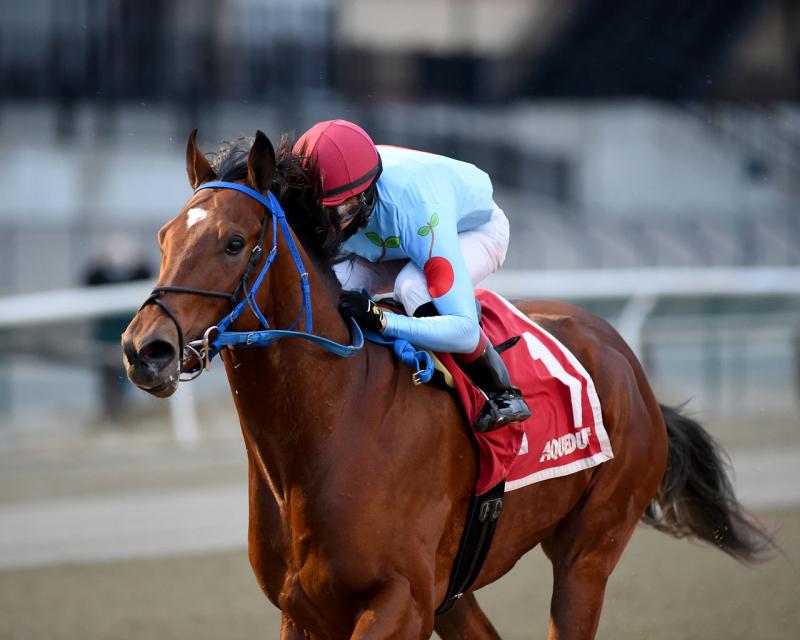 Capo Kane is a son of Street Sense and grandson of Hard Spun, the one-two in the 2007 Kentucky Derby (NYRA/Coglianese Photos/Chelsea Durand)

If one of your favorite runnings of the Kentucky Derby (G1) is the Street Sense-Hard Spun finish in 2007, you’ll love the pedigree of 2021 hopeful Capo Kane. Sired by Street Sense and out of a daughter of Hard Spun, Capo Kane grafts their bloodlines onto a fine family.

Street Sense has had a couple of major Derby contenders in recent years unfortunately miss their chance due to injury. McKinzie was sidelined in the spring of 2018, as stablemate Justify was coming to the fore. Last year, unbeaten Maxfield made his comeback on the pandemic-prolonged trail, only to be shelved again before the Run for the Roses.

While Maxfield is a Godolphin homebred, Capo Kane could have been one. Godolphin sold his dam, Twirl Me, when she was carrying him at Keeneland November 2017. Bringing $30,000, she made her way to California where Capo Kane was born.
Twirl Me is bred on the cross of a Northern Dancer-line stallion over a Mr. Prospector-line mare. That’s a mirror image of Street Sense’s cross, since he’s a Mr. Prospector-line stallion from a Northern Dancer-line mare. Thus Capo Kane’s pedigree sports 4x4 inbreeding to both supersires, each a grandson of the great Native Dancer (Mr. Prospector on his sire’s side and Northern Dancer via his dam, Natalma). 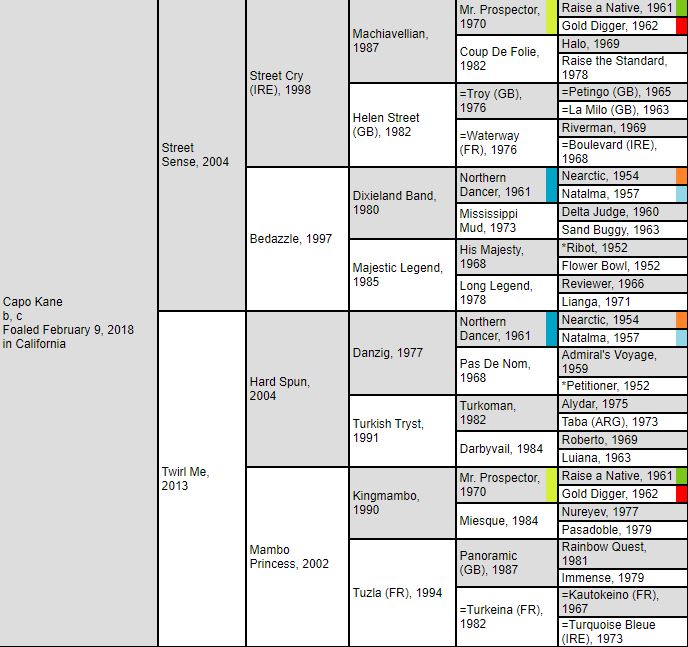 Twirl Me’s dam, Mambo Princess, is a daughter of two prominent turf milers in Kingmambo and Tuzla. Kingmambo, by Mr. Prospector and out of two-time Breeders’ Cup Mile (G1) legend Miesque, won a trio of marquee events in Europe including the 1993 French 2000 Guineas (G1) and St James’s Palace (G1) at Royal Ascot.

Tuzla missed by just a neck in the 1999 Breeders’ Cup Mile to Silic, who ironically was her former stablemate. Both had started out with trainer Pascal Bary in France before joining Julio Canani in Southern California. A multiple Grade 2 winner when acquired by Stonerside Stable, Tuzla was transferred to Bob Baffert and narrowly won the Ramona (G1). But Canani beat her in the Breeders’ Cup as his Silic held on at Gulfstream Park.

An intriguing feature of Tuzla’s pedigree is her dam’s inbreeding to Relko, a champion in both England and France in 1963-64. Winner of the Epsom Derby and Coronation Cup, Relko also took the French 2000 Guineas, Prix Royal-Oak, Prix Ganay, and Grand Prix de Saint-Cloud in his illustrious career.
Tuzla hails from the same female line as French champion *Grey Dawn II, the only horse ever to beat the great *Sea Bird when they ran one-two in the 1964 Grand Criterium.
Going further in the maternal ancestry, Capo Kane traces to the family labeled 16-c, which is responsible for 1991 Kentucky Derby winner Strike the Gold. Their ancestress in common is from a century ago, French import *Agnes Sard (foaled 1917). Capo Kane descends from a more prolific side of the family, via the Man o’ War mare Judy O’Grady, who placed in such major races as the Jockey Club Gold Cup, Manhattan, and Alabama in 1935 before becoming an influential matron. 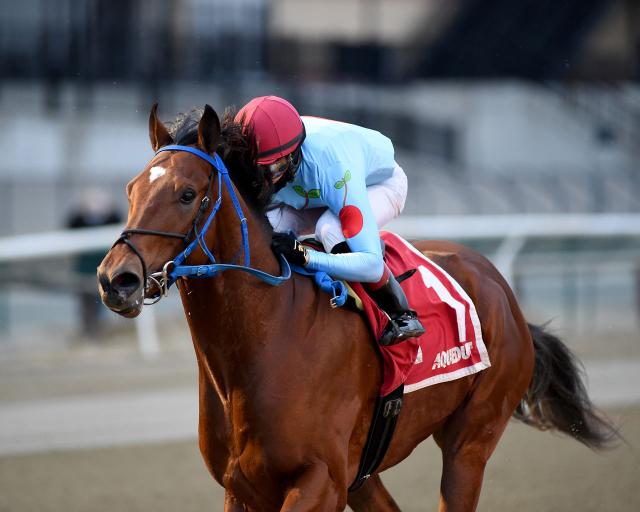