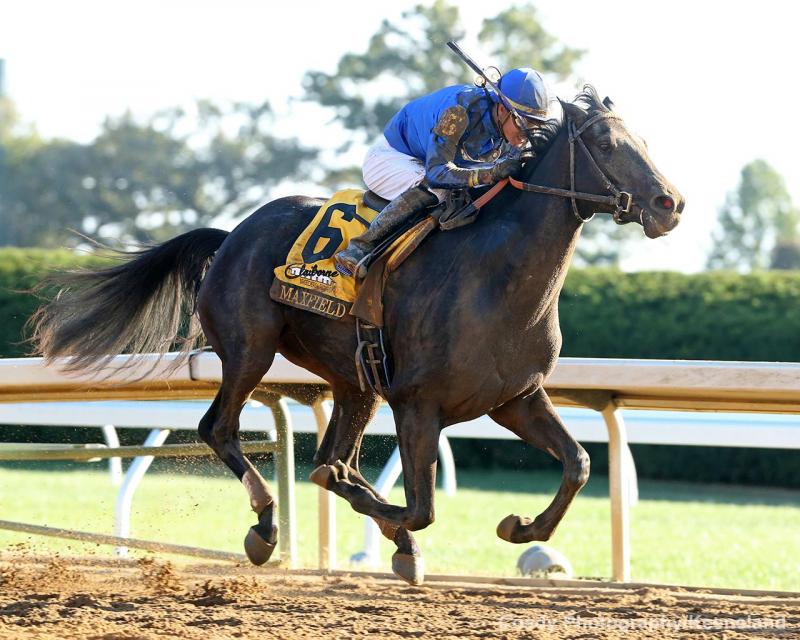 Only time will tell who benefits most from the postponement of the Kentucky Derby (G1) to Sept. 5, but Maxfield is on the short list of candidates. After the unbeaten Breeders’ Futurity (G1) winner was sidelined by injury, the first Saturday in May presented a tight timetable. Now Maxfield has the luxury of four more months to build to a peak effort, and his pedigree fuels optimism.

The Godolphin homebred is by 2007 Kentucky Derby champion Street Sense, who made history as the first Breeders’ Cup Juvenile (G1) winner to wear the roses. If Maxfield can take the Derby, he would raise his sire’s historical profile further. Street Sense would join the exclusive club of Derby winners to sire Derby winners.

Street Sense has been in this position before. His best son so far, McKinzie, was prominent on the 2018 trail until being sidelined. McKinzie resurfaced that fall to land the Pennsylvania Derby (G1), and he’s since added such Grade 1 prizes as the Malibu and last summer’s Whitney at Saratoga.

Street Sense’s sire, Street Cry, was himself unlucky to miss his chance at Derby glory through injury in 2001. A homebred for Sheikh Mohammed, Street Cry developed into an international celebrity in 2002. After romping in the Dubai World Cup (G1), he was equally dominant in the Stephen Foster H. (G1) at Churchill Downs.

Street Cry lived up to his pedigree as a blueblood son of Machiavellian and Helen Street, who both excelled in Europe. Machiavellian, a French champion juvenile, was likewise royally bred, being by Mr. Prospector and from the superb family of Northern Dancer. Street Cry’s dam, classic winner Helen Street, captured the 1985 Irish Oaks (G1) and factors as the ancestress of global sire Shamardal and current French classic hopeful Victor Ludorum.

Helen Street’s sire, Troy, turned the Epsom/Irish Derby (G1) double among other major prizes in his championship year in 1979. Sadly, he died young in the midst of only his fourth season at stud. Considering the legacy of Helen Street and his other top daughters – the dams of Breeders’ Cup Turf (G1) winner Pilsudski, 1999 Epsom Derby victor Oath, and Royal Ascot’s 2005 Gold Cup (G1) star Westerner – the loss of Troy is incalculable. 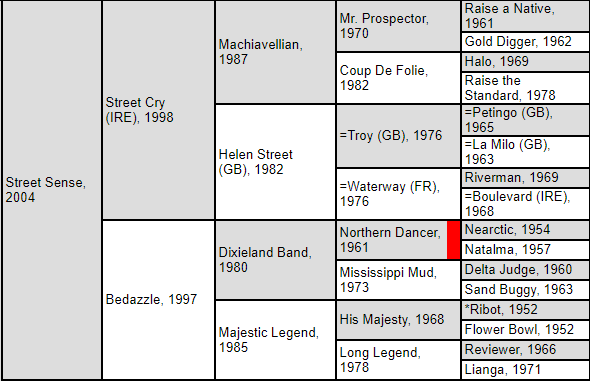 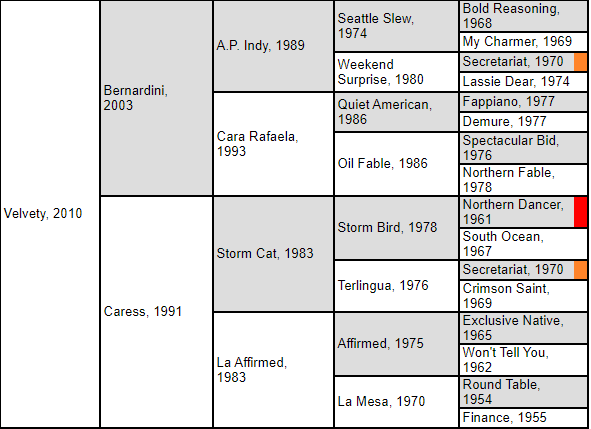 Although he’s sired the likes of Travers winners Stay Thirsty (2011) and Alpha (dead-heat in 2012), and fellow millionaire To Honor and Serve, Bernardini is taking off particularly as a broodmare sire with his daughters producing 2018 Travers hero Catholic Boy, 2019 Kentucky Oaks (G1) winner Serengeti Empress, and current Derby contender Modernist.

Velvety is a half-sister to Grade 1-winning sire Sky Mesa (by another A.P. Indy stallion, Pulpit) and to multiple Grade 3 scorer Golden Velvet (herself the dam of last fall’s Knickerbocker [G2] victor Lucullan). Sky Mesa, Golden Velvet, and Velvety are all out of multiple Grade 3 vixen Caress, who beat males in the 1995 Poker (G3). Caress, by Storm Cat, is a full sister to Bernstein (best known for siring two-time champion turf female Tepin).

Velvety’s pedigree sports all three Triple Crown winners of the 1970s – the sire line of Seattle Slew, with Affirmed showing up on the dam’s side and Secretariat appearing in both halves (as the broodmare sire of A.P. Indy and Storm Cat). Moreover, another who arguably should have worn the crown, Hall of Famer Spectacular Bid, factors in Bernardini’s ancestry.

Velvety has another Triple Crown connection from her fifth dam Busanda, who is by 1937 sweeper War Admiral. Busanda was a terrific racemare whose major victories include the 1951 Suburban H. over males, but her long-lasting achievement was becoming the dam of Hall of Famer and influential sire Buckpasser.

Maxfield traces to one of the most prolific blue hens in the stud book, *La Troienne. The foundress of the family labeled 1-x, she is the ancestress of four Kentucky Derby winners in the last quarter-century – Sea Hero (1993), whose sire Polish Navy belongs to the family too; Go for Gin (1995); Smarty Jones (2004); and Super Saver (2010).