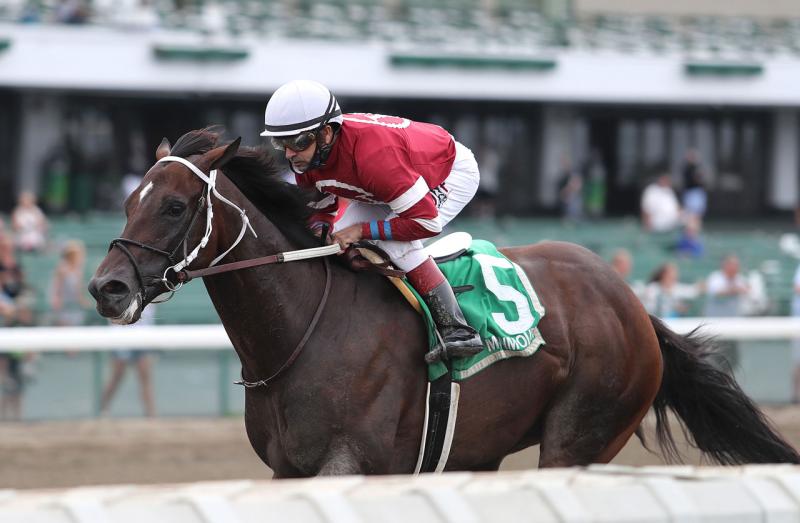 A space in the Kentucky Derby (G1) starting gate became more secure for Pneumatic, if his connections so desire, after the son of Uncle Mo rolled to a convincing victory in Saturday's $155,000 Pegasus S. at Monmouth Park, the final 2020 Road to the Kentucky Derby series prep.

The 4-5 favorite in a field of eight under Joe Bravo, Pneumatic rated in third before taking on long-time leader and stakes newcomer Arkaan around the far turn. The favorite easily took control passing the quarter pole, opened up a clear advantage late, and won by 2 1/4 lengths from Jesus' Team. Arkaan and Super John finished third and fourth, respectively.

This was the fifth career start for Pneumatic, who won debut at Oaklawn Park on Feb. 15 by a neck going 6 furlongs. Following up with a win over one mile against allowance company at the same track, he then made an impressionable stake debut in the Matt Winn (G3) at Churchill Downs, finishing third behind Maxfield and Ny Traffic.

Last time, Pneumatic finished a distant fourth in the June 20 Belmont S. (G1). The top three from that race -- Tiz the Law, Dr Post, and Max Player -- are all Kentucky Derby bound. Should Pneumatic join them, he'll go with earnings of $256,850.

Pneumatic was produced by the stakes-placed Teardrop, a Tapit three-quarter sister to Grade 1 winner Pyro and and full sister to the Grade 3-winning War Echo.