The Road to the Kentucky Derby Championship Series will ramp up over the next three weekends as eight major qualifiers will be offered. All offer the maximum of 170 points to the top four finishers (100-40-20-10), and the final round of prep races will determine favoritism for the 148th running of the Kentucky Derby on May 7.

Fields are set for the TwinSpires.com Louisiana Derby (G2) and UAE Derby (G2) this Saturday, and probables have been released for the remaining races.

A smashing 2 3/4-length winner of the Feb. 19 Risen Star (G2) at Fair Grounds, Epicenter has been installed as the 7-5 morning line favorite in the 1 3/16-mile Louisiana Derby (G2). The bay colt will bring high speed to his final Kentucky Derby tune-up, dominating the action wire-to-wire in the Risen Star, and Joel Rosario rides.

The Kentucky Derby is the one big North American race to elude Hall of Fame trainer Steve Asmussen, who is winless from 21 previous attempts, and Epicenter figures to be a top contender at Churchill Downs with a Louisiana Derby victory.

A quartet of Japanese runners will seek to provide the Kentucky Derby with an international flair in the 1 3/16-mile UAE Derby (G2) at Meydan. Sekifu, a fast-closing second in the Saudi Derby (G3) on Feb. 26, merits serious respect, and Combustion also brings solid credentials following his triumph in the Feb. 20 Hyacinth S. at Tokyo. Crown Pride and Reiwa Homare complete the Japanese contingent.

UAE 2000 Guineas (G3) victor Azure Coast and American-based Gilded Age, third when opening his sophomore season in the Withers S. (G3) for Bill Mott, are among the other contenders of note.

Only three fillies have captured the Kentucky Derby, including Winning Colors (1988). She was saddled by the legendary D. Wayne Lukas, a four-time Kentucky Derby winner who can get back into the spotlight via Secret Oath in the 1 1/8-mile Arkansas Derby (G1).

A romping winner of a pair of Kentucky Oaks qualifiers at Oaklawn Park, Secret Oath looms as a probable favorite in her first start against males. Her expected challengers include Rebel (G2) winner Un Ojo and third Barber Road; San Felipe (G2) runner-up Doppelganger; We the People, who improved to 2-for-2 when crushing local allowance foes on March 12; and impressive Fair Grounds allowance scorer Cyberknife.

The 1 1/8-mile Florida Derby (G1) at Gulfstream Park sets up as a three-horse showdown. Simplification and White Abarrio, convincing winners of the Fountain of Youth (G2) and Holy Bull S. (G3) respectively, are the most accomplished, and Charge It brings all the promise.

A gray son of Tapit, Charge It will jump straight to stakes competition, and a two-turn race, following an 8 1/2-length maiden tally in his second career start on Feb. 12. Many consider the exciting colt to be Todd Pletcher’s top Kentucky Derby contender.

Tiz the Bomb and Stolen Base, separated by a neck in the March 5 John Battaglia Memorial S. at Turfway Park, are both expected back for the Jeff Ruby Steaks (G3). The 1 1/8-mile event may also attract El Camino Real Derby (G3) winner Blackadder, who will make his next start under the direction of Rodolphe Brisset.

Tampa Bay Derby (G2) and Sam F. Davis (G3) winner Classic Causeway, who presently tops the Kentucky Derby Leaderboard with 66 qualifying points, is expected to stretch out to 1 1/8 miles for the Blue Grass (G1). He’s won both races this year on the front end for Brian Lynch and Irad Ortiz Jr.

The Keeneland fixture is a target for Smile Happy, the favorite among individual interests in the first four pools of the Kentucky Derby Future Wager. The Grade 2-winning colt is eligible to improve upon a second in the Risen Star (G2).

The 1 1/8-mile Santa Anita Derby (G1) will feature an exciting matchup between Forbidden Kingdom and Messier.

Trained by Hall of Famer Richard Mandella, Forbidden Kingdom has been brilliant recording runaway wins in the San Felipe (G2) and San Vicente (G2), but questions surrounding his threshold for longer distances remain. He’ll face a speedy rival in Messier, who exits a 15-length, wire-to-wire win in the Robert B. Lewis (G3) on Feb. 6.

Messier, who was formerly trained by Bob Baffert, has been transferred to Tim Yakteen and is now eligible to earn Kentucky Derby qualifying points. 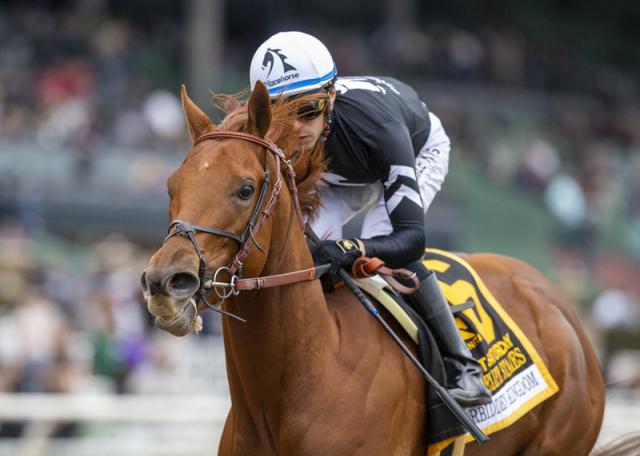