Tales from the Crib: Audible

Born in an historic New York neighborhood, Audible hopes to become only the second horse bred in the Empire State to win the Kentucky Derby (G1) after Funny Cide (2003). But there’s also a lot of Kentucky in this colt who was raised in the Bluegrass.

Audible was bred by Richard Leahy’s Oak Bluff Stables and foaled at Berkshire Stud in Pine Plains, New York. As the historical page on the farm’s website explains, this area of the Hudson Valley has been prime real estate for both horses and cattle for centuries. Imported stallion Messenger, the Standardbreds’ patriarch as well as a significant influence on the early American Thoroughbred, called Pine Plains home for a few years in the late 1790s. The town even had a racetrack in the 19th century.

After an uneventful birth at Berkshire Stud, the three-week-old Audible moved to Winter Quarter Farm in Kentucky with his dam, Blue Devil Bel. That was because the mare was due to be bred back to a Kentucky stallion, so Blue Devil Bel and her foal would spend time in the Bluegrass as she was covered and began her new pregnancy.

Thus baby Audible went from one historic location to another, for Winter Quarter is the birthplace and childhood home of Hall of Famer Zenyatta. The Lexington nursery also has a connection to a Hall of Famer of an older vintage, 1960s superstar Kelso. His dam, Maid of Flight, was herself foaled and raised on the farm.

Winter Quarter was founded in 1948 by World War II veteran Burnett Robinson and named after a Coast Guard lightship. His son, Don, took over at the helm in the late 1970s. Recently honored with the Hardboot Breeders’ Award in recognition for his career achievements, Don runs Winter Quarter in tandem with his own son, Ferran Robinson.

Ferran spoke of the teamwork between Winter Quarter and Berkshire Stud, owned and operated by veterinarian Douglas Koch, to care for the Leahy mares and their babies.

“Doug does the scary stuff,” Ferran said of Dr. Koch’s presiding over the foaling and newborn stages in New York. 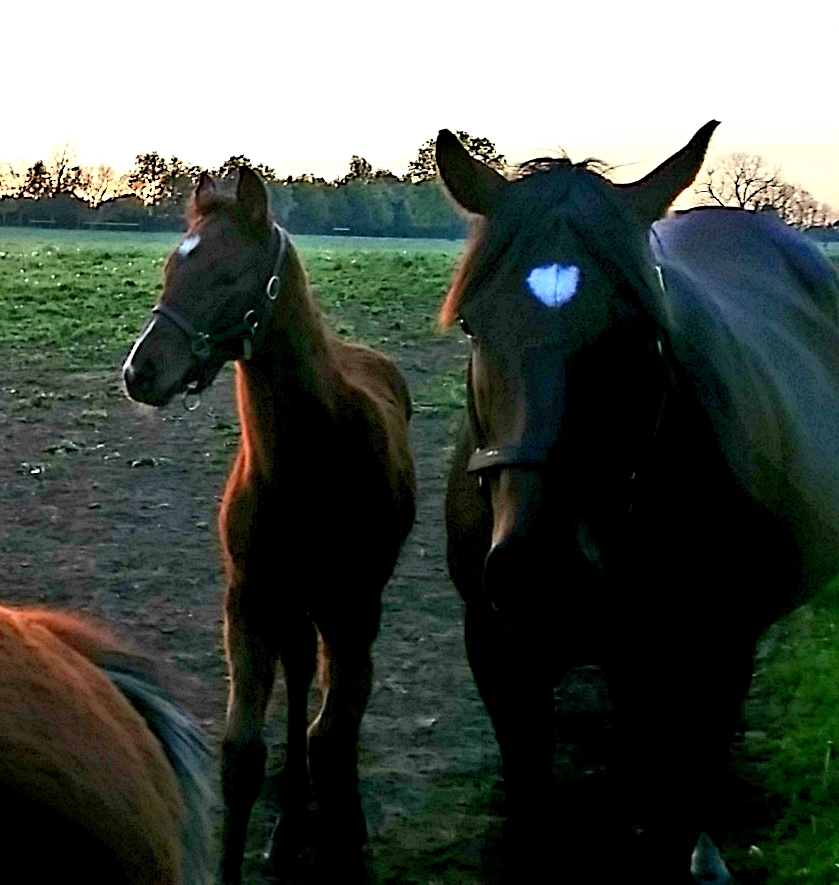 Audible is a third-generation horse for Leahy. Blue Devil Bel’s dam, Fahamore, was purchased by Winter Quarter, as agent on behalf of Leahy and his partners in Waterville Lake Stable, for $130,000 as a yearling at the 2000 Keeneland September Sale.

A nicely bred filly by Gulch, Fahamore is out of Cathy’s Gal, in turn a daughter of Hall of Famer Easy Goer and multiple Grade 1 heroine Classy Cathy. Unfortunately, Fahamore was unplaced in her only start and retired with an injury. Leahy wanted to keep her as a broodmare, and with Don Robinson serving as agent, he bought her in his own right for $37,000 at Keeneland November in 2003.

Fahamore rewarded Leahy’s belief in her by producing multiple stakes scorer and Grade 3-placed Akilina. Bred and raced in the name of his Oak Bluff Stables, Akilina has become a successful broodmare herself. Her offspring include Governor Malibu, runner-up in the 2016 Peter Pan (G2) and Jim Dandy (G2) and fourth in the Belmont (G1), and Japanese-based Rieno Tesoro, who beat the boys in the 2016 Zen-Nippon Nisai Yushun (subsequently made a scoring race on the Japan Road to the Kentucky Derby). Worth watching for is Akilina’s current two-year-old colt by Super Saver, a $235,000 yearling purchase by Spendthrift Farm named Next Gen.

Aside from passing on natural talent, the matriarch Fahamore has also transmitted her likeable temperament.

“She’s sweet, quiet…pretty level-headed,” Ferran said. “The whole female line has produced foals like that, with that trait. They’re all quiet and sweet.”

Precisely because of their friendly and personable nature, Fahamore’s clan would be the first at the gate, hanging around to engage with people – and the barn cat, Mocha. That’s how her grandson, baby Audible, came to become great friends with the cat.

“The cat does his routine at the gate,” Ferran noted, “and he starts to interact with the foals of the friendly mares there.”

Mocha developed a “true affection” for a Ghostzapper filly, and as she stood contentedly, the cat would walk between her legs on terms of confident familiarity. He didn’t take that liberty with Audible, and the two would just nuzzle each other at fence.

“The foal would mouth at him, and he’d put his muzzle on him.” 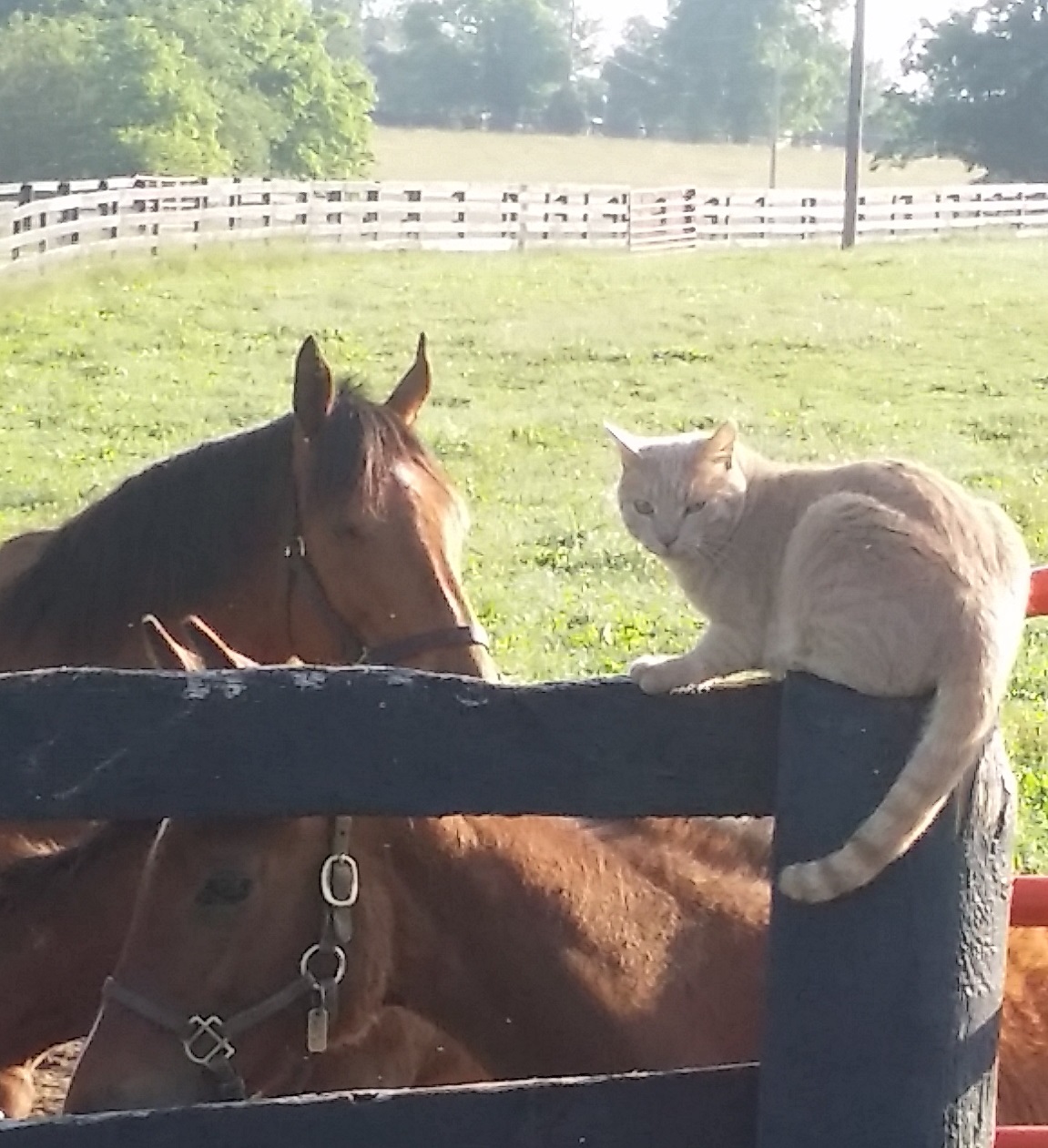 Audible would have returned to New York, had Blue Devil Bel remained in foal with her next baby. Sadly, she lost that pregnancy. As a result, Audible stayed on at Winter Quarter, going through the weaning process and growing up into a yearling.

Ironically, Blue Devil Bel had likewise remained at Winter Quarter at a similar point in her early life. The only one of the New York-bred or Pennsylvania-bred fillies who didn’t return to her home state as a youngster, she had to be introduced to a new group. Ferran was concerned about how the other fillies would react to her being added to their field. They came up to check out the newcomer and soon had her surrounded.

Blue Devil Bel, although ordinarily good-natured like the rest of her family, was no weak pushover. She took action in self-defense.

“She stood there, ended up in the middle of everyone, and on her two front feet as a pivot, she went like a water sprinkler of kicks! She kicked everybody else!”

That strong attitude was in evidence on the racetrack. Although Blue Devil Bel did not match the accomplishments of her half-sister Akilina, she reportedly incurred an injury that limited her latent potential and kept her racing at a lower level.

“She always tried,” Leahy told Chris McGrath of Thoroughbred Daily News. “I always had great respect for her, because I knew she wanted to run faster. That’s why I kept her: she was good-looking, she had talent, and she tried all the time.”

Indeed, Leahy kept her several times. For some reason, Blue Devil Bel never could get much traction in the sales ring. Offered at Keeneland on three occasions, years apart, she was led out unsold each time -- for $25,000 as a yearling, $57,000 as a broodmare (when carrying Audible), and most recently when bidding stalled at $55,000 at last November’s Breeding Stock Sale.

In contrast, Audible attracted much more support at auction. He is by the successful young sire Into Mischief, who is himself a half-brother to Audible’s Derby rival Mendelssohn and to four-time Eclipse Award champion Beholder.

The yet-unnamed colt also handled his sales prep like an old pro. The yearlings were hand-walked in different routes around the farm, to get them used to being led around in different environments.

He was “easy-going,” as Ferran recalled, true to type as a descendant of the placid Fahamore. “Not one trying to rear up or get loose. Some can get rattled easily.” 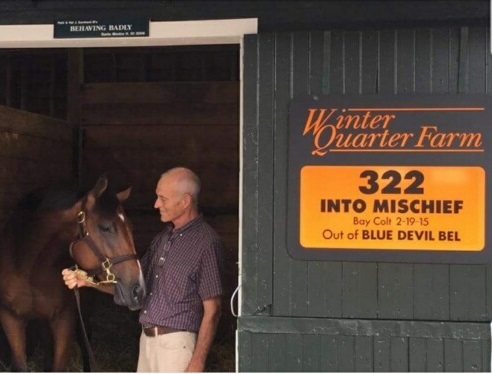 Now the colt made the trek back to his home state, with five others from Winter Quarter, for the 2016 Fasig-Tipton New York Bred Preferred Yearlings Sale at Saratoga Springs. Ferran recalled multitasking when posting the above photo – while mowing a field in his tractor! – with a caption that read in part, “This fellow here with Don could be the star of them all.”

Crupi is renowned for tutoring such future stars as Uncle Mo, 2017 Kentucky Derby winner Always Dreaming, and current hopeful Vino Rosso, preparing them to join trainer Todd Pletcher at the racetrack. But Crupi’s New Castle Farm is also a force on the auction scene, buying yearlings and developing them into hot properties at the two-year-olds in training sales – a practice known as “pinhooking.”

Audible became a pinhook home run when Crupi re-offered him at the following year’s Fasig-Tipton Gulfstream Sale. The juvenile touted himself when working one furlong at the under tack show in :10 2/5.


Then in the auction ring, the Into Mischief-Blue Devil Bel colt commanded $500,000 from China Horse Club and WinStar Farm.

Shipped to WinStar near Versailles, Kentucky, Audible logged one work there in July before advancing to Pletcher’s barn at Saratoga. Now he’s returned to his second home, so to speak, as a major player in Derby 144.

As Audible goes for glory at Churchill Downs, he serves as a living vindication of Leahy’s belief in Fahamore, and in her daughter Blue Devil Bel. 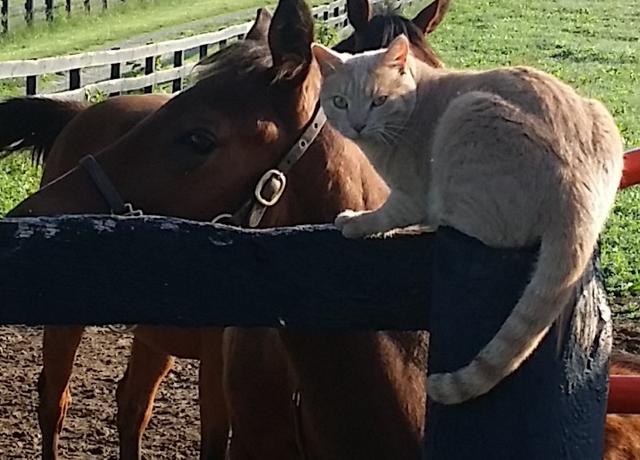