Tales from the Crib: Vino Rosso

One day after Justify was born at John D. Gunther’s Glennwood Farm, the Versailles, Kentucky nursery welcomed another bundle of joy – Vino Rosso. Who would have dreamed that three years later, the Gunther-bred colts who grew up together would face each other in the Kentucky Derby (G1)? And stamp their tickets to the Derby by winning two major scoring races on the very same day?

That’s what happened on April 7. Bob Baffert’s highly regarded Justify remained unbeaten in the Santa Anita Derby (G1), solidifying his status as the early favorite for the Run for the Roses. Across the country in New York, the Todd Pletcher-trained Vino Rosso took a step forward from his previous stakes appearances and earned a breakthrough win in the Wood Memorial (G2).

Such a Derby prep double would be a coup for any breeder, but all the more so for Gunther and his daughter Tanya, who plans the matings. Unlike the mega-farms with large broodmare bands, Glennwood is a small family establishment. For the Gunthers to have bred two Derby horses in the same year, and serious contenders to boot, is a testament to their breeding program as well as to the whole Glennwood team that raises them.

The Gunthers have made a splash on the international scene too. Their most recent success story is Without Parole, a homebred son of the mighty Frankel whom they kept to race themselves in England. Without Parole has romped in his two starts by a combined margin of 12 lengths, and trainer John Gosden has mentioned the 2000 Guineas (G1) as a possible option. The first British classic of the season, the Guineas is held on May 5, the same day as the Kentucky Derby. Could the Gunthers pull off a transatlantic Guineas-Kentucky Derby double?

As you might infer from their racing careers so far, Justify and Vino Rosso had different personalities as youngsters. Justify was the rock star, and Vino Rosso was the unassuming type.

“For anyone who may remember the TV show ‘Happy Days,’ these two colts for some reason bring to mind the two main characters in the show: Richie Cunningham and the Fonz.

“Vino Rosso reminds me of Richie Cunningham while Justify is all about the Fonz. The Fonz was the cool biker guy, all rebel-style with a leather jacket and swagger to match while Richie was the clean-cut, quintessential good guy. Though Vino Rosso immediately reminded me of Richie, it also wouldn’t be hard to picture him sporting a leather coat and making a golden oldie sing from the jukebox with the mere tap of his hand!”

Boasting a classic-oriented pedigree, Vino Rosso is by Hall of Famer Curlin, who is also represented in Derby 144 by champion Good Magic and Solomini. Vino Rosso’s dam, Mythical Bride, is a daughter of Street Cry, world-famous as the sire of Zenyatta and Winx. Street Cry has sired a Kentucky Derby winner in Street Sense (2007), a rival of Curlin’s from the same classic crop.

John Gunther bought Mythical Bride from WinStar Racing, agent, for a bargain $42,000 at the 2011 Keeneland November Breeding Stock Sale. Then in the midst of her racing career, Mythical Bride had won just one of eight starts, a maiden at Sunland Park. She raced five more times for Gunther, her best result being a third-place effort at Mountaineer, and ultimately retired with a modest portfolio of $35,040.

His purchase was clever considering that WinStar had spent $1.5 million to buy Mythical Bride’s dam, Flaming Heart, at Keeneland November in 2007 when she was carrying her soon-to-be-born Street Cry baby. And it assumed even shrewder proportions when Flaming Heart went on to produce two significant performers bred by WinStar – Laugh Track, who just missed in the 2013 Breeders’ Cup Sprint (G1), and Commissioner, beaten a mere head in the 2014 Belmont S. (G1).

By the time her half-brother Commissioner was placing in the “Test of the Champion,” Mythical Bride was in foal to another Belmont Stakes near-misser, Curlin. Their marriage was a typically fascinating genetic play on Tanya’s part.

Curlin and Mythical Bride are bred along a similar pattern. Both are by Mr. Prospector-line sires and out of Deputy Minister-line mares. By mirroring that cross, Vino Rosso’s resulting pedigree sports inbreeding to both influential sires. 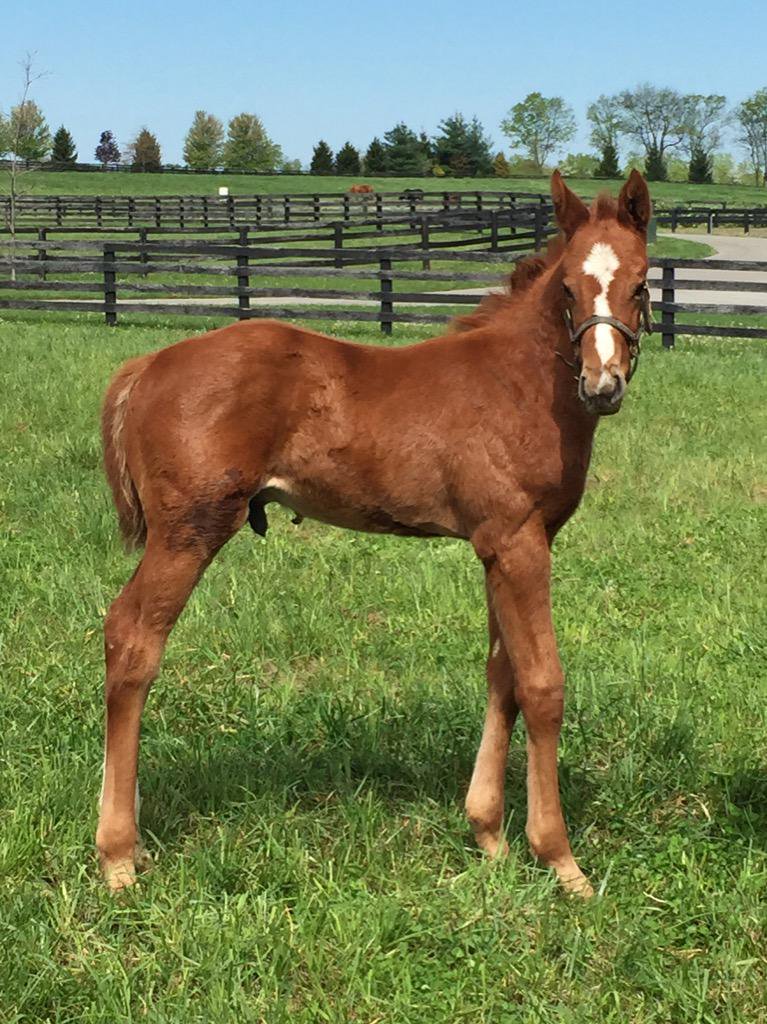 Born on March 29, 2015, the chestnut colt was only six days old when Curlin’s daughter Stellar Wind dominated the Santa Anita Oaks (G1). Tanya was encouraged not only because the emerging star was by Curlin too, but because of a trait she had in common with Mythical Bride’s foal.

“From that point onward, as Stellar Wind raced her way toward champion three-year-old filly honors and beyond, it crossed my mind on a number of occasions how the marking on Vino Rosso’s head was similar to hers,” Tanya said.

“That seemingly insignificant sign – an irregular star and strip down both of their foreheads – was enough to spark our early hopes and dreams about the future of this chestnut colt by Curlin out of Mythical Bride. Although it requires a significant leap of faith to link marking similarities with comparable athletic potential (!), a tiny thread of hope like this is sometimes all that is needed to keep the dream alive in the heart and mind of a breeder striving to achieve the ultimate goal of breeding a champion one day.”

The colt also had an unflappable demeanor, as Tanya went on to describe in detail.

“As a youngster, Vino Rosso was a laid-back and patient horse. He loved to sleep flat out and wasn’t too bothered by anything.

“A telling sign that he was an easy character to have around, was his yearling paddock assignment. We paired him up with a buddy in the paddock furthest from our colt barn and in closest proximity to Glennwood’s main entrance. Usually that particular paddock is occupied by the easiest to handle colt(s) and the least likely to use the arrival of the bin collector, the feed delivery truck, or other big noisy vehicles as a good reason to instigate a serious game of monkeying around.

“If the ‘wrong’ colt is allocated to this paddock, it can seem like a really long and taxing walk for the human handler trying to contain a rambunctious colt-child all the way down the lane from the barn to this paddock during sales prep.

“Additionally, although most of our colts are separated, we inevitably have more colts than we have small individual paddocks which necessitates the selection of a couple of colts that we think we can keep together through sales prep. Basically, we try to identify the colts that will beat each other up the least!

“Vino Rosso was one of those colts. He would typically walk like a relative gentleman all the way to the paddock, raising the occasional eyebrow and offering a lopsided smile at the more boisterous of his cohorts, and then turn his attention almost immediately to grazing when he was turned loose. Sure he would play with his paddock buddy for the requisite 30 seconds but usually playtime was over quickly and he was on to more important things – devouring that sweet green goodness called grass!”

In that respect, he wasn’t like the show-off Justify.

“While Justify was all exuberance and self-confidence,” Tanya recalled, “Vino Rosso had a level of nonchalance and composure that is unusual to see in a young horse. It was like he was wiser than his age and though he didn’t mind the schoolboy antics of the other colts, he didn’t need to prove anything or waste unnecessary energy by partaking in it himself.” 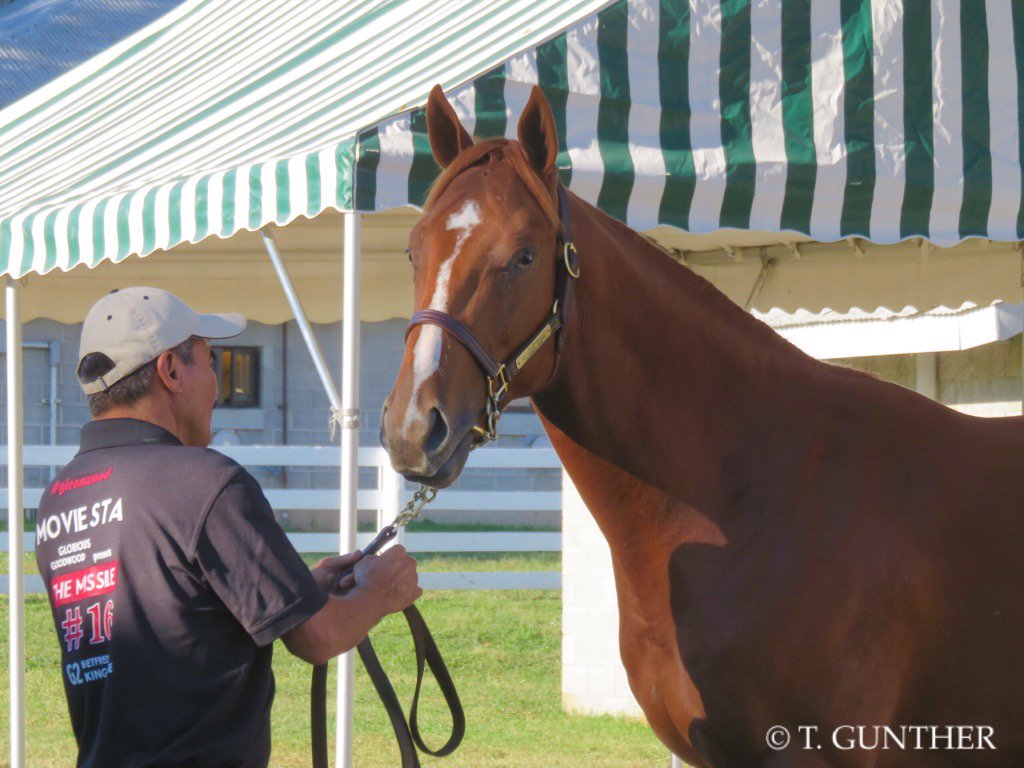 Both future Derby rivals, yet-unnamed, were offered among the Glennwood draft at the 2016 Keeneland September Yearling Sale. Although not bringing quite as much as Justify’s $500,000, Vino Rosso had no shortage of admirers himself when bringing the gavel down at $410,000.

J.J. Crupi, acting as agent for Mike Repole and St. Elias Stable, secured the prospect. Repole is perhaps best remembered for campaigning champion Uncle Mo, who missed the 2011 Derby due to illness. St. Elias Stable, the nom de course of Vincent Viola, was a co-owner of 2017 Derby hero Always Dreaming.

Like Always Dreaming and Uncle Mo, Vino Rosso received his early tutorials at Crupi’s New Castle Farm near Ocala, Florida. He logged a series of works there before joining Pletcher’s string at Saratoga, where he trained up to his career debut at Aqueduct last fall.

His new owners named him after the Italian phrase for red wine, an apt description for a mellow colt bred to be better with age and maturity.

When Vino Rosso and Justify reunite on Derby Day, will they remember their babyhood together at Glennwood?

“Having shared the same field and been stabled across from each other as weanlings then having stalls beside each other as yearlings, I am wondering if there is a possibility that they will recognize each other up at Churchill Downs? What a place and occasion for a reunion! Wouldn’t that be something!?

“Now I’m imagining them sitting across from each other at a table at Arnold’s (back to the ‘Happy Days’ analogy) sharing tales of their separate adventures and pursuits in between the day they parted company at the yearling sale and the first Saturday in May for the 144th running of the Kentucky Derby! I would love to see a spark of recognition in their eyes as they circle the saddling paddock at Churchill Downs.” 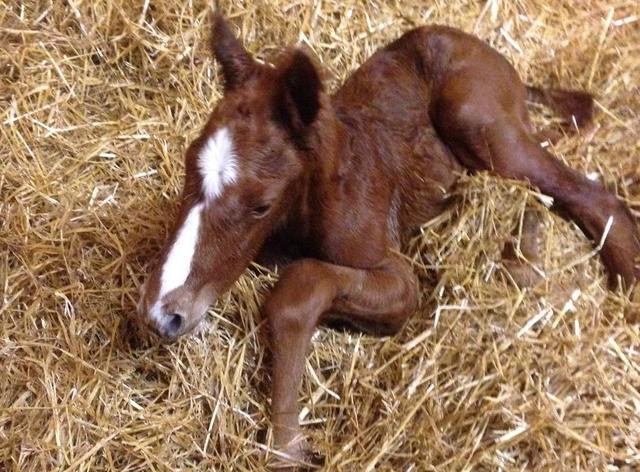