Tales from the Crib: Flameaway

Descended from Northern Dancer via the Storm Cat branch, Flameaway has a cosmopolitan pedigree that explains his success on dirt, turf, and synthetic surfaces. His late sire, international sensation Scat Daddy, has no fewer than four runners in Derby 144, led by early favorite Justify from the Bob Baffert barn and the Aidan O’Brien-trained Mendelssohn.

Flameaway’s dam, Vulcan Rose, is by 2000 Kentucky Derby star Fusaichi Pegasus from a top-class Anglo-Irish family. She is a granddaughter of Flame of Tara, the winner of Royal Ascot’s Coronation S. (G2) in 1983 and an exceptional broodmare. Her most celebrated offspring were Salsabil, heroine of three classics (amid a total of five Group 1s) who beat the boys in the 1990 Irish Derby (G1), and Marju, the 1991 St James’s Palace (G1) victor and Epsom Derby (G1) runner-up. Both went on to fine careers in the breeding shed, as have several of their less famous half-siblings.

A case in point is Vulcan Rose’s dam, Rose of Tara. By multiple champion Generous, who ironically defeated her half-brother Marju at Epsom, Rose of Tara was winless on the track but produced Canadian Grade 2 scorer Essential Edge. Her daughters are continuing the family tradition, for Rose of Tara now factors as the granddam of 2017 Ontario Derby (G3) winner and Queen’s Plate runner-up Tiz a Slam.

So when Vulcan Rose entered the sales ring at Keeneland in November 2012, as a five-year-old broodmare carrying her first foal, she represented an opportunity to buy into a superb female line. And she ended up representing value as well, selling for just $20,000.

The astute purchaser was Deborah Holmes’s Phoenix Rising Farms. The idea to breed Vulcan Rose to Scat Daddy was similarly inspired, for the mare was bred on a similar cross to Scat Daddy’s own dam (Mr. Prospector over Nijinsky II). In this way those two potent influences were reinforced.

A resident of British Columbia and an accountant by trade, Holmes is the definition of a small-time breeder. According to Thoroughbred Daily News’ Perry Lefko, she bred just six horses in 2015, and two of them are classic contenders – Flameaway and Canadian-based Silent Sting, who’s on the Queen’s Plate trail. Needless to say, that’s an extraordinary strike rate.

Both were foaled at Gail Wood’s Woodlands Farm in Ontario, where they received appropriate nicknames. Silent Sting was dubbed “Caesar” because he was born by way of Caesarian section, sadly because his dam, Mona Mia, was not going to make it. Mona Mia posthumously made Holmes the breeder of a Grade 1 winner, for her daughter Celestine (by Scat Daddy) captured the 2016 Just a Game (G1) at Belmont Park.

Flameaway’s nickname, “Hercules,” has much happier associations. Wood explained that was because he was “so handsome,” and all the cuter because of his dimpled back.

But the colt’s professionalism was most striking of all, from the moment he was born, stood up, and nursed.

“A professional racehorse from day one, a class act from day one,” Wood recalled, adding that he was a foal with a special “confidence level from the day he was born.

“He was everybody’s favorite – such a lovely animal to deal with.

“He had a tremendous connection with people.”

After weaning time in August, the yet-unnamed colt was sent to Pennland Farm near Paris, Kentucky. Plans called for him to be offered through Penn Sales at Keeneland November. But he wasn’t ready for the auction ring that fall, and connections opted to wait until Keeneland’s January Horses of All Ages Sale.

“Kind of backward,” was how John Penn regarded the weanling colt in the months he spent at his family’s farm. “Just kind of a gawky baby,” the type that needed time. 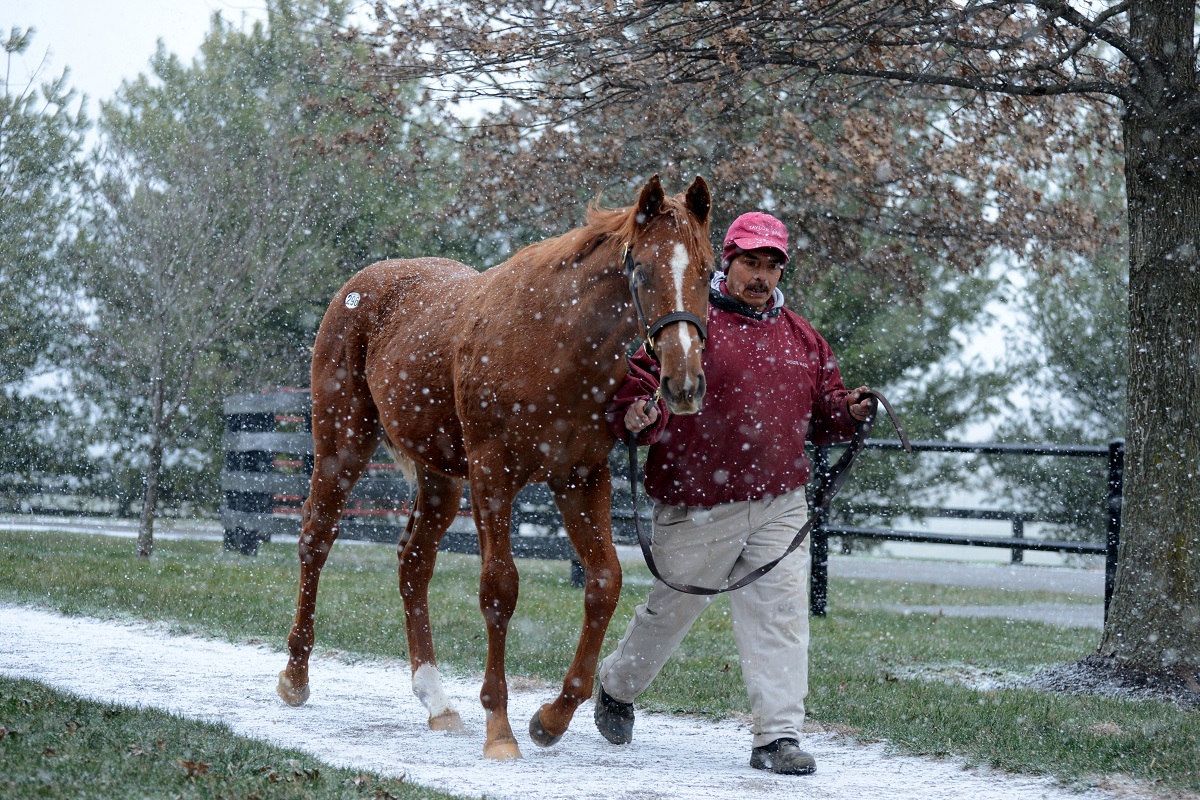 But come January, the Ontario-bred was coming together well enough to catch the eye of Taylor Made Farm’s Katie Taylor-Marshall during the Keeneland inspection process. Her father, Frank Taylor, devised a clever stroke to ward off the competition and keep the price within their range – make a dramatic opening bid of $150,000. It worked. Thus Taylor Made, in the name of its Bloodstock Investments III, snapped up the prospect in one fell swoop.

The colt was bought as a “short” yearling in January, that is, a youngster who just officially turned a year old on January 1. Because babies continue to develop as the months pass, a yearling in summertime or early fall can look far better than the just-barely-past-weanling stage of wintertime. For that very reason, they can attract a lot higher prices, and a well-bought yearling in January can turn a profit at resale later in the year.

That was the “pinhooking” game plan behind the purchase of Flameaway. When he went through an awkward phase, however, he began to look less appealing, and less likely to help the balance sheet.

Taylor-Marshall said that the colt’s lower lip just kept growing and growing, but not the rest of him. 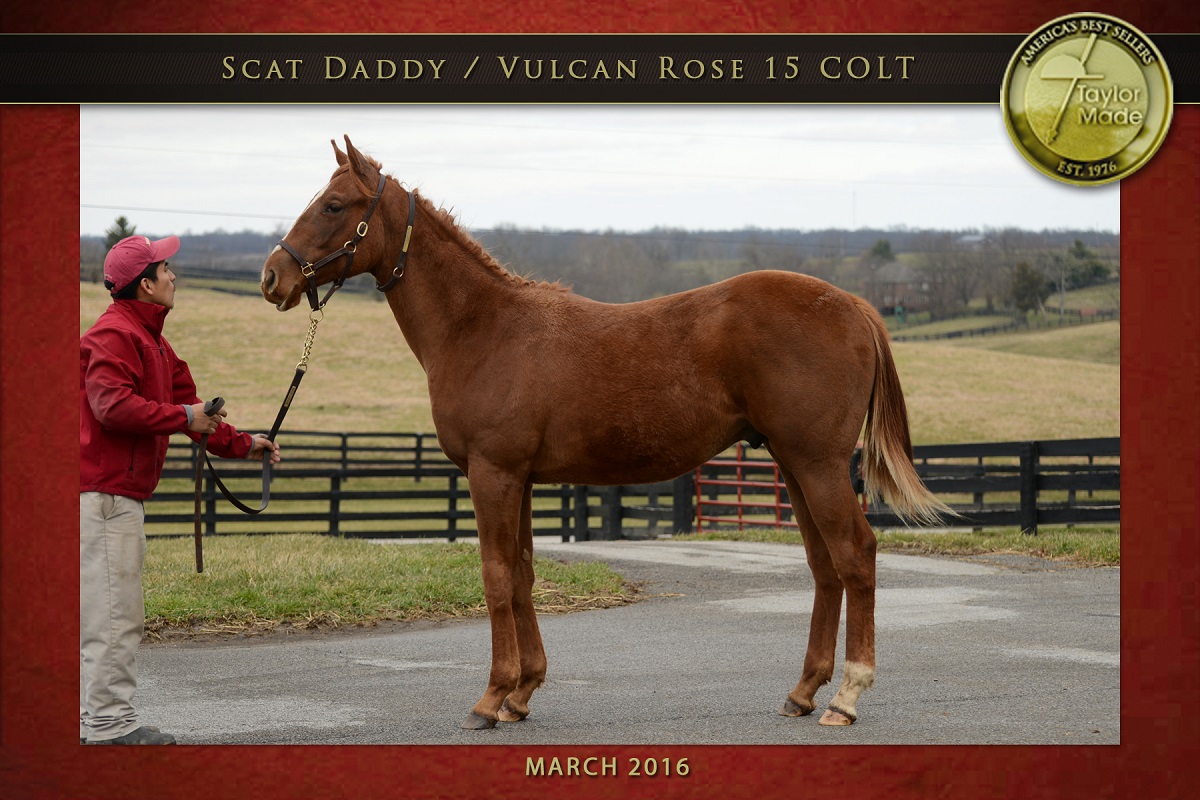 “Oh my gosh! What have we bought,” she remembered thinking at the time. “But then he finally came around.”

Like Wood, Taylor-Marshall was most taken with the colt’s attitude.

“He’s pretty unique for his breeding. Both sides of his family lend itself to being high-strung,” but not this one.

“He’s very smart, very easy to deal with. He’d be the kind of horse who’d be snoring, lying down, sleeping in his stall for four hours in the afternoon.

“He didn’t waste any energy being an idiot. He was just very compatible with whatever you were asking him to do.”

Flameaway put his ungainly stage behind him in time for the boutique Fasig-Tipton Saratoga Sale in August, where he turned a handsome profit by commanding $400,000 from John C. Oxley. The owner of 2001 Kentucky Derby winner Monarchos, Oxley finished a troubled fourth here last year with champion Classic Empire. 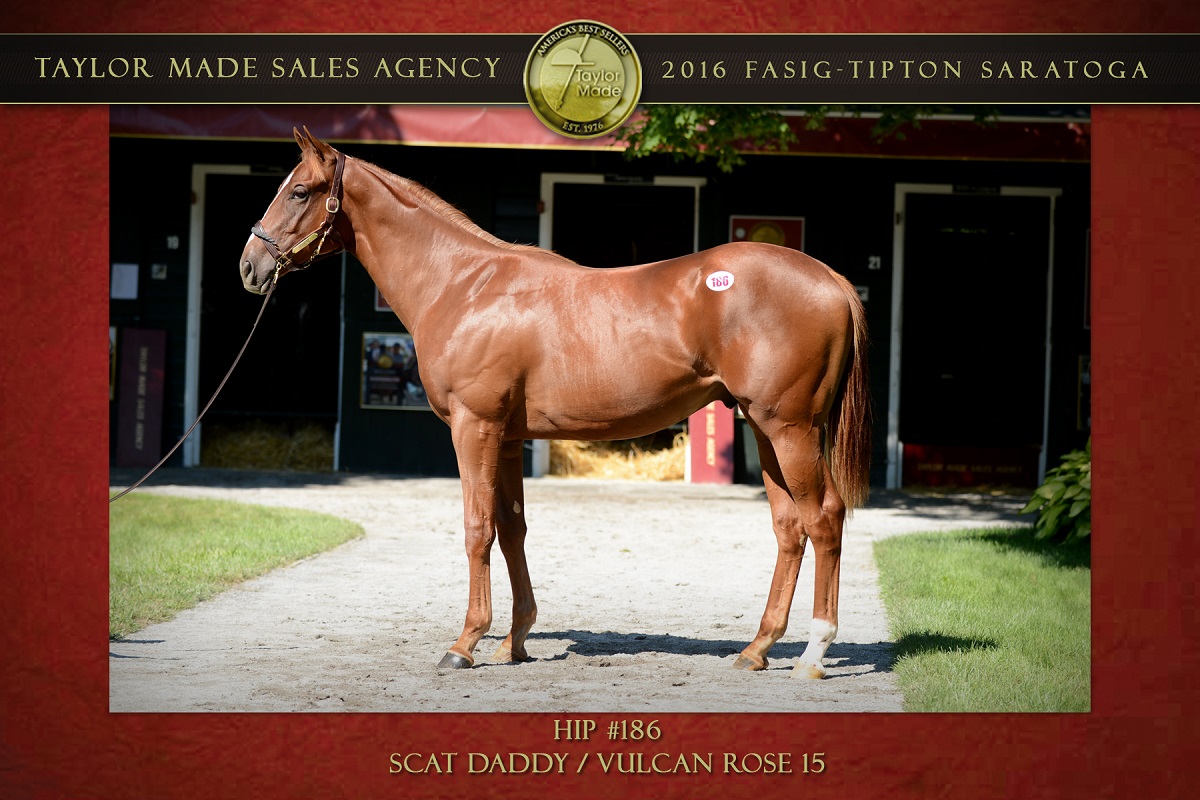 Continuing to progress throughout his racing career for trainer Mark Casse, Flameaway has earned a late nomination to the Triple Crown. The Queen’s Plate remains a long-term possibility, where the foal once called “Hercules” could meet his old buddy and fellow Holmes-bred “Caesar,” now known as Silent Sting.

Wood is delighted for all of the connections, “a wonderful group of people involved,” especially Holmes and husband Barry.

“Deborah Holmes is a lovely lady,” Wood said. “I’m so glad she’s having so much wonderful luck.”

Perhaps the best endorsement of Flameaway came from Hector, the longtime Taylor Made team member who took care of the colt during the Saratoga sale, as Taylor-Marshall recalled.

Photos courtesy of Laura Richard/Taylor Made 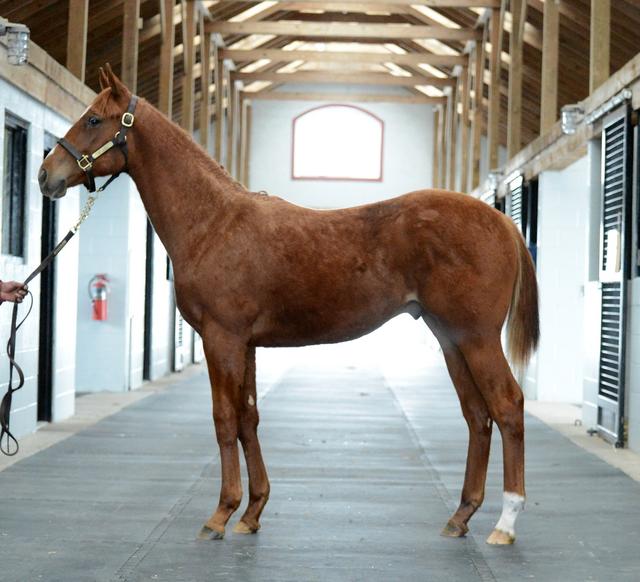