Tales from the Crib: Good Magic 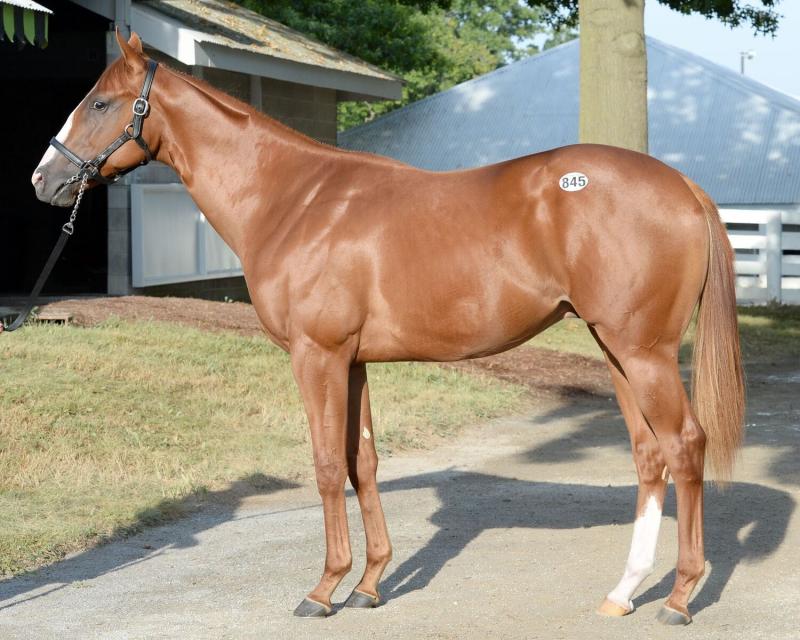 Good Magic as a yearling at Keeneland September (Keeneland photo)

Eleven years ago, Stonestreet Stables made its Kentucky Derby (G1) debut with Curlin, a fine third at Churchill Downs on the way to compiling a Hall of Fame career. Fast forward to 2018, and now it’s a son of Curlin, champion Good Magic, who’s fueling the Derby dreams of Stonestreet and co-owner e Five Racing Thoroughbreds.

Still a relative newcomer to the sport in Curlin’s time, Stonestreet has developed into an industry powerhouse over the past decade. The stable has campaigned (alone or in partnership) another Hall of Famer in Rachel Alexandra as well as champion My Miss Aurelia and international star Lady Aurelia, and the farm is joining the ranks of the Bluegrass State’s premier nurseries.

Thus the vision of its late founder, Jess Jackson of Kendall-Jackson winery fame, is being fulfilled by his widow, Barbara Banke, and Good Magic is a case in point.

Not only is Good Magic a homebred by Curlin, but his dam, Glinda the Good, is herself a Stonestreet homebred. Glinda the Good is by Curlin’s old rival from the 2007 Triple Crown trail, Hard Spun, and out of Magical Flash, acquired for $140,000 at the 2004 Keeneland November Breeding Stock Sale.

By that time Magical Flash was already an established broodmare. She had raced for Clement L. Hirsch, the co-founder of the Oak Tree Racing Association, and bred several stakes performers for him and for her next owner, John Gunther’s Glennwood Farm, before moving to Stonestreet.

Glinda the Good was up for sale as a yearling at Keeneland September in 2010, but when bidding stalled at $200,000, Stonestreet kept her. Had the price been high enough, she would have joined a new owner. In that case, would she ever have met Curlin? Might Good Magic’s future existence have hung in the balance as Glinda the Good toured the auction ring?

Like Curlin, Glinda the Good was trained by Hall of Famer Steve Asmussen. She was twice stakes-placed at two, in the 2011 Pocahontas (G2) at Churchill and Blue Hen S. at Delaware. Improving her resume in 2012, Glinda the Good captured the Island Fashion S. at Sunland Park and the Instant Racing S. at Oaklawn, and also finished second in the Sunland Park Oaks. After a subpar fourth in one outing as a four-year-old, she retired with a record of four wins from 11 starts and earnings of $226,758.

Glinda the Good visited Curlin in her second season as a broodmare, and delivered her colt on March 1, 2015. The blaze-faced baby was always a looker, a chestnut like dad, with the sensible brain to match.

Banke has spoken of the colt’s quality from day one.

“Good Magic has always been first-class,” Banke said, “and one of those rare horses that was gorgeous as a foal, weanling, yearling, and two-year-old.

“A very intelligent horse, he never shied away from anything we introduced him to. He’s an exceptional mover and that’s probably what strikes you first about him, plus he looks a lot like his sire!”

No one on the farm can remember Good Magic even needing a bandage, so straightforward and uneventful was his growing up from babyhood through his yearling days.

With his appealing profile, the yet-unnamed colt figured to attract plenty of attention at the 2016 Keeneland September Yearling Sale. He duly sparked a flurry of bids culminating in $1 million from Mike Ryan, agent for e Five Racing Thoroughbreds.

“He has a great mind on him,” Ryan told Keeneland publicity at that time. “He’s a very easy horse to like and it didn’t take much genius to pick him out. He’s as good a Curlin as you want to find. I knew he was going to be hard to get and that we were going to have to stretch to get him.”

Ryan’s a shrewd judge to have on your side. He’s been involved with the last two Kentucky Derby winners, buying Nyquist (2016) as a yearling (and reselling him as a two-year-old) and breeding Always Dreaming (2017) with Gerry Dilger under the name of Santa Rosa Partners.

E Five Racing Thoroughbreds has had exceptional success in just its first two years in operation. Named for the Edwards family of Bob, Kristine, and their children Cassidy, Riley, and Delaney, e Five has won back-to-back editions of the Breeders’ Cup Juvenile Fillies Turf (G1) with New Money Honey (2016) and Rushing Fall (2017). Both are trained by Chad Brown, who also has Good Magic.

But Good Magic wasn’t going to leave the Stonestreet orbit entirely. A deal was worked out after the Keeneland sale so that Stonestreet could remain on board as a co-owner, and the partnership with e Five was born.

Banke believes that Good Magic’s professional attitude throughout the whole sale experience, including the numerous inspections by potential buyers, carries over into his racing career.

“Despite being extremely busy he showed as well at the end of each day as he did at the beginning,” she noted. “I think this attitude helped him top Book 2 (of the sales catalog) and it helped him travel to California, gallop a couple times at Del Mar, and then win the Breeders’ Cup Juvenile (G1). He’s a horse who doesn’t need everything to go in his favor to win.”

Banke also commented on how Good Magic embodies the Stonestreet brand, and covers both the breeding and racing sides of the business.

“His grandam (Magical Flash) was one of the first mares Jess bought when he started the farm and we raced his stakes-winning dam, Glinda the Good. As a commercial breeder, we are keenly focused on developing a broodmare band that produces yearlings that can perform. As someone who races, it is special that we were able to retain an interest with e5 and enjoy the ride.

“Good Magic is the full package – a stallion’s pedigree, flawless conformation, great attitude, and floats over the ground – and was in the top 10 percent of our 2015 foal crop. However, you never really know how special a horse is until they are under tack. Good Magic excelled at our training center in Florida; that’s when we knew there was potentially excitement in store.” 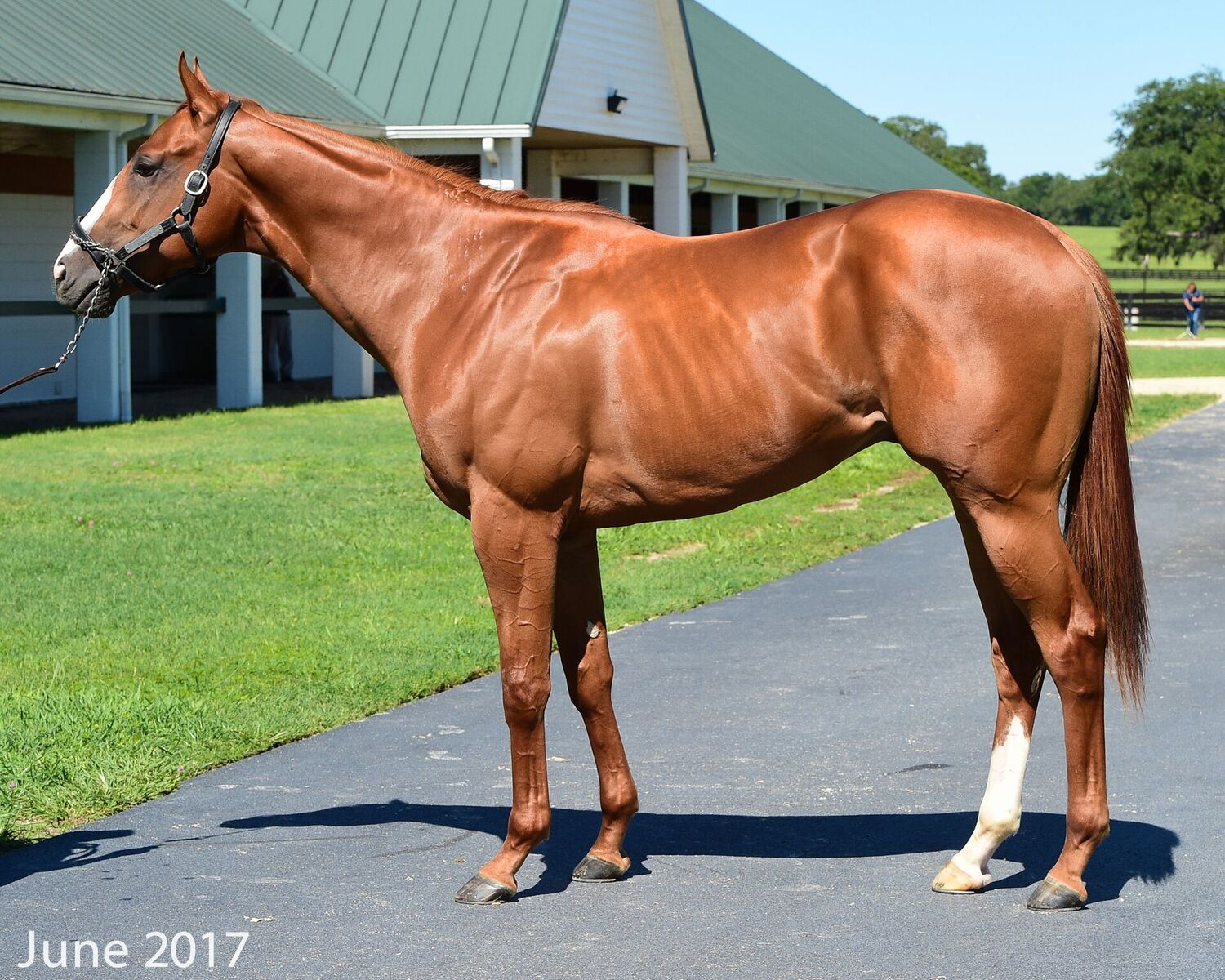 Those early lessons came under the tutelage of Ian Brennan, who recalled how Good Magic showed himself to be a good one at the Ocala facility. It’s not so much an individual wow moment as a consistent standard over time.

Good Magic “always had a lot of class, always looked after himself,” Brennan said. “Typical Curlin, just got better and better with each breeze.

Not only was he “consistently good, a little better each time,” but Good Magic also “never put in a bad breeze.”

In this way Brennan “got a really good feel for him” as he progressed through his preliminary training.

Good horses do the same things right, “never give you any problems,” and by that measure Good Magic could be judged. While he had a playful moment now and then, “a buck and a squeal,” Good Magic knew when that was appropriate, and when to be all business. Once he stepped onto the track, he was “always really professional.”

Good Magic graduated from Ocala and shipped to Brown’s barn at Saratoga, recording his first work at the racetrack June 19. The original expectation was that Good Magic would gradually build up to a race later in the season. But he came to hand so well that he was ready to debut for Brown on Travers Day.

“Didn’t really intend for him to run at Saratoga,” Brennan said of the plan when Good Magic headed north. “He just kind of brought himself there.”

After Good Magic finished a bang-up second in that first start, Brown stepped him up in class for the Champagne (G1) at Belmont, and he just missed. Brown had the confidence to try him in the Breeders’ Cup, and he made history by breaking his maiden in the Juvenile. The result was a triumph for Curlin, who also sired runner-up Solomini.

Good Magic’s solid foundation as a juvenile gives him a big advantage that sire Curlin didn’t have going into his Derby. Curlin was unraced at two, and no horse since Apollo in 1882 has won the Derby after just beginning his career at three. That lack of experience likely factored in Curlin’s loss at Churchill, for he went on to reign as a two-time Horse of the Year and ranked as North America’s all-time richest Thoroughbred upon his retirement.

If Good Magic wears the roses that eluded his sire, raise a glass of Kendall-Jackson wine and toast the Stonestreet legacy.