Tales from the Crib: Highly Motivated 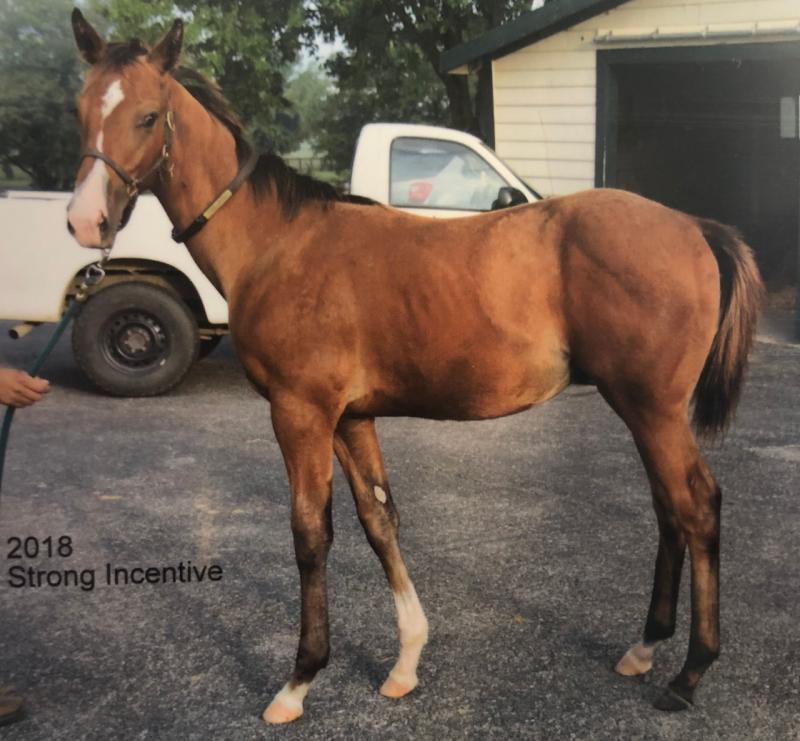 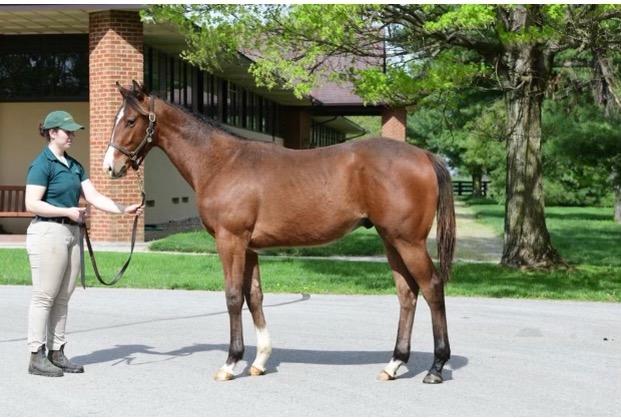 Highly Motivated in April 2019 (Lane's End photo)
“Must have.”
Those words, jotted down and encircled for emphasis on a catalog page, summed up the verdict of bloodstock adviser extraordinaire Mike Ryan after his inspection of Highly Motivated as a weanling.
Offered as part of the Lane’s End consignment at the 2018 Keeneland November Sale, the bay colt was up for sale because his original partnership was beginning to go their separate ways.
The son of Into Mischief was bred by hedge fund maestro Seth Klarman’s Klaravich Stables, who with longtime co-owner William H. Lawrence campaigned Bricks and Mortar, about to conquer all as 2019 Horse of the Year; 2017 Preakness (G1) hero Cloud Computing; and multiple Grade 1-winning millionaire Practical Joke, fifth in the same year’s Kentucky Derby (G1) – all acquired with Ryan’s involvement.
The colt’s dam, Strong Incentive, was herself a stakes winner for Klaravich and Lawrence and their trainer, Chad Brown. Bred by Spendthrift Farm in Ontario, the $200,000 OBS April purchase returned to her home province and romped in the 2015 Jammed Lovely S. at Woodbine. Although that was a seven-furlong sprint, jockey Alan Garcia’s postrace comments indicated she was just getting warmed up.
“She was so comfortable to the end,” Garcia told Woodbine publicity. “At one point, I asked her to go, and she took off. She did it so easy today.
“I had plenty of horse. Galloping out, I couldn’t even pull her up.”

Strong Incentive didn’t get further opportunities on the racetrack, retiring with a record of 6-2-1-0, $123,568. Her sire, Warrior’s Reward, also scored his signature win at seven furlongs in the 2010 Carter H. (G1). But he could hold his own over further, placing second in the 2009 Jim Dandy (G2) and missing narrowly in the Northern Dancer (G3). And being by Medaglia d’Oro himself, out of a well-related Seeing the Gold mare, Warrior’s Reward was bred to go a route.
Ryan saw Medaglia d’Oro’s influence coming to the fore in Strong Incentive, who was also consigned to the same Keeneland November Sale as her weanling son.
Strong Incentive is a “great, big mare,” Ryan recalled, noting there was “a lot of Medaglia d’Oro” in her. “She had the leg and length and stretch and height.”
Hence Into Mischief was the “perfect” stallion for her, since they complemented one another physically.
Their union produced a fine bay colt on March 23, 2018, at the Justice family’s Dell Ridge Farm. Dell Ridge is also home to Gary and Mary West’s mares, so two other onetime prominent Derby hopes were part of the same crop of foals on the farm – Life Is Good and Concert Tour.
Although he wouldn’t be named Highly Motivated for a couple of years, Dell Ridge manager Des Ryan found that reflected his nature.
“As a foal he always was motivated – full of himself and fresh,” Des recalled, observing he was a “strong-minded” type who kept himself energized.
“He was good to be around, had a good disposition, but he could be playful with you at the same time.
“He was always the first one to initiate a little game of tag, as foals do.
“He was very straightforward, didn’t have any issues, so it’s nice to see horses like that go on and do great things.”
After weaning, the colt moved to Lane’s End – birthplace of Derby rival Known Agenda – ahead of his date at Keeneland November. 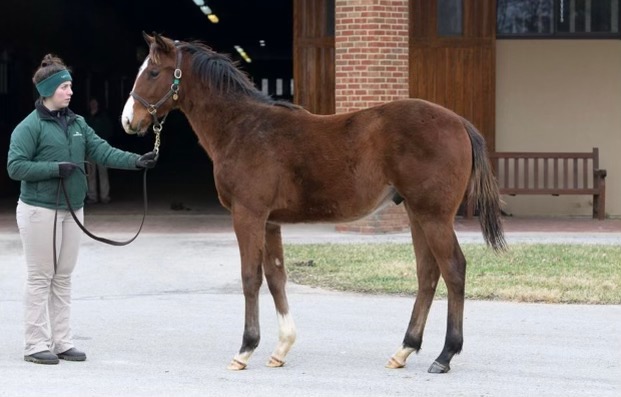 Mike Ryan was advising Klarman regarding the Keeneland sale. The co-breeder of 2017 Derby winner Always Dreaming with the late Gerry Dilger, Ryan had also bought 2005 Horse of the Year Saint Liam and 2016 Derby champion Nyquist as yearlings – to name just a few more of his stellar finds.
To Ryan’s expert eye, he was a gleaming jewel:
“The first time I saw him was at the sales. I thought he was an exceptional colt – well-grown, strong, handsome, muscular, beautiful head and hip, superb top line, strong over the back and quarter, tremendous hip and quarter…He was a really good mover.

“It didn’t take any stroke of genius,” Ryan added. “He was very strong, well made.

“An outstanding foal. I thought he was the best Into Mischief foal in the sale.”

Ryan’s marked-up catalog page lets us peer over the shoulder of a master at work. 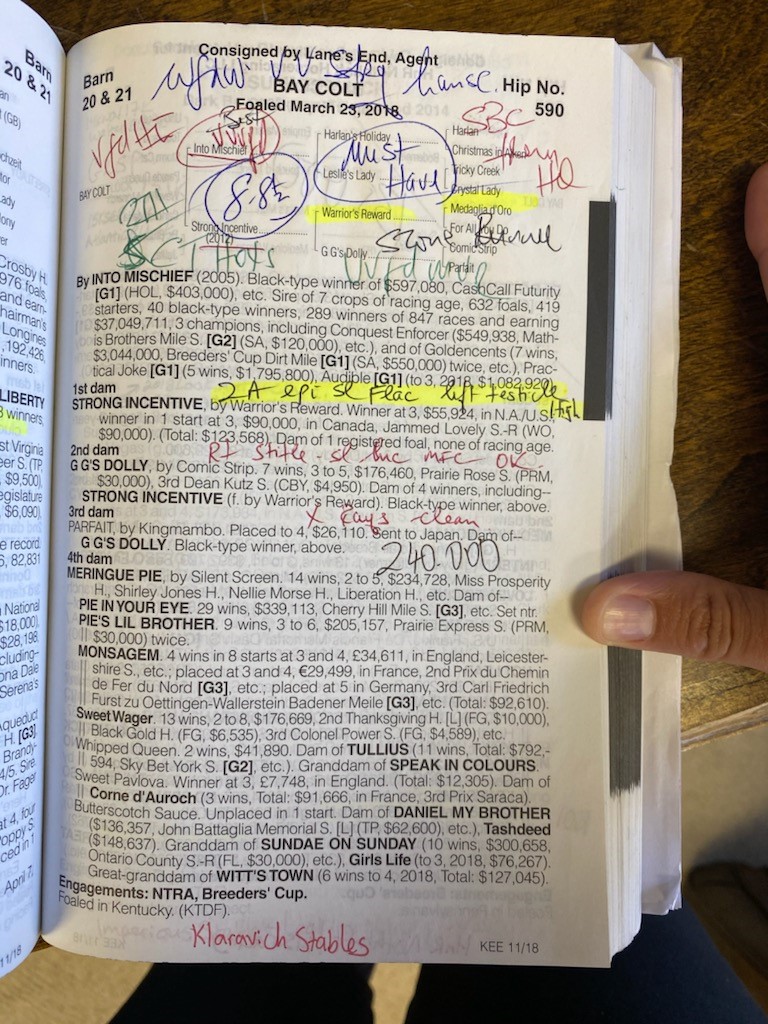 Rating the weanling an 8 to 8 1/2 on a theoretical scale of 10, Ryan said that’s just about the highest mark he gives.
“An exceptional grade for me. I never give a 9.”
While the colt was going through the ring to dissolve the partnership, Ryan told Klarman he should not let this one get away to another buyer.
“You need to buy out your partner,” Ryan counseled. “Don’t sell this horse.”
Aside from the aforementioned “must have,” his notations included “two-turn horse” and “stone runner.”
As Klarman’s agent, Ryan secured the colt for $240,000.
“To be honest, I thought he would bring a lot more,” said Ryan, who had expected all the major pinhookers to descend upon him as a hot prospect for resale.
“He probably would have made $500,000 as a yearling.
“Some of them don’t always develop as you hope they will from the weanling stage. But this horse kept improving all the time.” 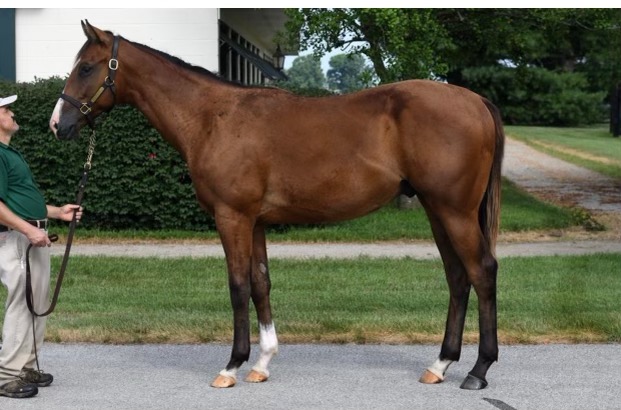 After spending the rest of his early life at Lane’s End, the colt was sent to school with Niall Brennan, like Derby favorite Essential Quality and fellow contender Sainthood. At his Ocala academy, Brennan has also developed Derby winners Orb (2013) and Nyquist (2016); 2013 Belmont (G1) hero Palace Malice (another Ryan purchase); and 2017 Horse of the Year Gun Runner.
Highly Motivated is now expressing that latent talent spotted by Ryan. Trained by Brown like his dam, he missed by a neck in his Saratoga debut, beat Known Agenda to break his maiden at Belmont, and rolled to a track-record victory in the Nyquist S. on Breeders’ Cup “Future Stars Friday” at Keeneland.
While he’s had to settle for minor awards in both starts this season, Highly Motivated has nevertheless run well in less than ideal circumstances. He rallied for third despite a tough trip in the Gotham (G3). Uncharacteristically setting the pace in his two-turn debut in the Blue Grass (G2), he forced his old Brennan schoolmate Essential Quality to dig in to get past him.
Highly Motivated has a license to move forward substantially in the Kentucky Derby, with his preferred trip from just off the pace.
Ryan is delighted for Klarman, who has a chance at a Kentucky Oaks (G1)/Derby double with his unbeaten filly Search Results in the Friday feature.
“Mr. Klarman is a great owner who invests a lot of money each and every year,” Ryan said. “He does an awful lot for the industry, and we need more owners like him.”
Klarman made sure to keep Strong Incentive in his fold as well, with Ryan buying the mare for just $40,000 at the same sale. She’s visited sons of Into Mischief of late, delivering a filly by past Klaravich star Practical Joke on March 23 at Dell Ridge. Recently she went to the court of reigning Derby champ Authentic.
If Highly Motivated can seize the roses on Saturday, he’d make history for Into Mischief, who would become the first sire of back-to-back Derby winners. The leading sire has two other shots with Soup and Sandwich and Mandaloun.
Into Mischief “is like a good wine,” Ryan said. “People can’t get enough.”
Maybe Highly Motivated is a “must have” for Derby bettors too. 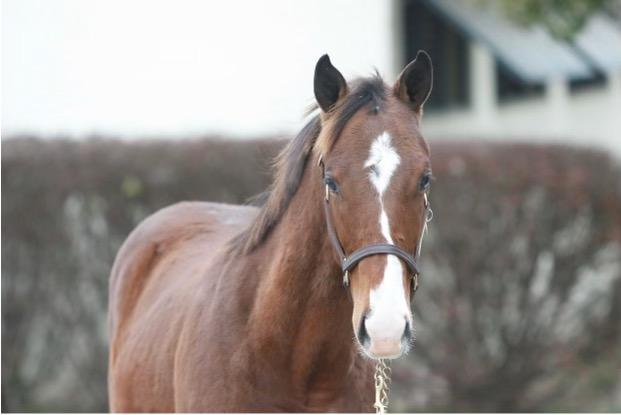