Tales from the Crib: Concert Tour

When Gary and Mary West’s homebred Concert Tour delivered a tour de force performance in the March 13 Rebel S. (G2) at Oaklawn Park, he elicited quite a comment from trainer Bob Baffert.

“To me, it was kind of an American Pharoah-type run,” the Hall of Famer told Oaklawn publicity, recalling his 2015 Triple Crown star who started his classic campaign in the Rebel.
Adding piquancy to that comparison, Baffert trains another unbeaten colt – in fact the early Kentucky Derby (G1) favorite – Life Is Good, himself bred by the Wests. While Life Is Good was sold as a yearling, the Wests held onto Concert Tour.
Thus one of the compelling storylines of the 2021 Derby trail revolves around the two West-bred dynamos in the Baffert barn. Did the Wests sell, or keep, a future Derby winner?
This isn’t the first time that the Wests have been involved in a pair of major Derby contenders in the same year. In 2019, they owned both Game Winner and Maximum Security, based with different trainers. Yearling purchase Game Winner was their leading hope, as the Breeders’ Cup Juvenile (G1) champion for Baffert – until their once-unheralded homebred Maximum Security progressed over the winter and earned his Derby ticket in the Florida Derby (G1).
What appeared to be a dream run turned into a nightmare. Maximum Security splashed to a front-running win in that Kentucky Derby, only to be disqualified for interference. Game Winner’s passage compounded the misfortune. Uncharacteristically far back in 18th early, and racing wide, he rallied for a valiant sixth in the slop. Game Winner was officially placed fifth after the stewards demoted Maximum Security, and his beaten margin – 3 3/4 lengths – left a nagging sense that he would have been closer with something resembling his usual trip.
Concert Tour has a pedigree angle in common with Maximum Security, being by a son of Street Cry and out of an A.P. Indy-line mare. Concert Tour’s sire is 2007 Kentucky Derby hero Street Sense, and his dam, the Tapit mare Purse Strings, is a close relative of 2008 Breeders’ Cup Juvenile Fillies (G1) champion Stardom Bound.
That careful curation of bloodlines is the handiwork of the Wests’ bloodstock and racing manager, Ben Glass. As agent on their behalf, he purchased Purse Strings for $240,000 at the 2012 Keeneland September Yearling Sale.
Purse Strings placed eight times before breaking her maiden in her 12th start. Her brief brush with fame on the racetrack came when she served as a work companion for the Wests’ 2015 Kentucky Oaks (G1) hopeful Oceanwave, both trained by Wayne Catalano.
After beginning her broodmare career by visiting Hard Spun, the runner-up in the 2007 Kentucky Derby, Purse Strings was bred to his conqueror Street Sense. Her bay colt arrived on Feb. 26, 2018 – almost two months before his Derby rival Life Is Good, who was foaled on April 22. 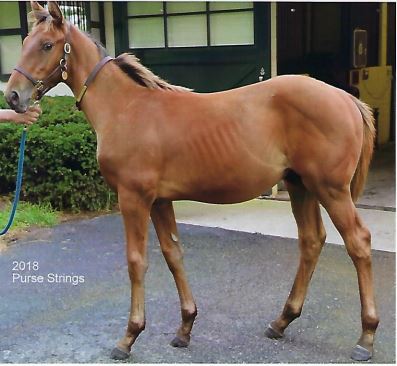 Both colts grew up at the Justice family’s Dell Ridge Farm, where the Wests’ mares reside, just east of Lexington in the Kentucky Bluegrass. The two had a straightforward upbringing, as Dell Ridge manager Des Ryan observed. Like Life Is Good, Concert Tour was easy to handle and never had problems.

But each was very much his own personality. While Life Is Good was always drawn to look at everything, Concert Tour was relentlessly focused on the task at hand.
“He was all business,” Ryan said, recalling how Concert Tour would march in and out whenever brought to the barn or led back to the field.
“He was very professional about everything he did, even as a foal. Very serious. He always acted that way.”
As Life Is Good prepared for his date with the Keeneland September auction ring, Concert Tour was sent in July of his yearling year to Ocala, Florida, for his early education. For nearly 30 years, Jeff Kirk had broken and pre-trained the Wests’ youngsters, including Maximum Security and Game Winner. But Kirk retired before the batch of 2019 yearlings was ready to go to school.
Enter Jorge Villagomez as the Wests’ new pre-trainer that summer. Villagomez has more than three decades’ experience in the craft, including 17 years with Barry Eisaman, before going out on his own. Among the stars developed at Eisaman Equine during Villagomez’s tenure was I’ll Have Another, the 2012 Derby and Preakness (G1) champion.
Concert Tour was his usual professional self as he absorbed his lessons at the Nelson Jones Training Center.
“He was a cool horse – a very smart horse,” Villagomez recalled. “Never had any problems. He came to me in the middle of July (2019). We broke him, started from scratch, got him going.”
After laying the months-long foundation of slow gallops, the youngsters could begin breezing – posting timed works to let them reveal their speed over a short distance. That’s when Concert Tour separated himself from the bulk of the 65 or so horses in his class.
“He really showed promise and talent from the time he started breezing,” Villagomez said.
Advancing to the top bracket, Concert Tour was just the type of prospect who deserved a spot in the Baffert barn. Only the most promising juveniles get that opportunity.
“He didn’t go to California by accident,” Villagomez summed up.
Concert Tour wasted no time once settled in at Baffert’s Los Alamitos division. Clocking his first official move on June 7, 2020, he fired a bullet quarter-mile in :24.20.
A resounding winner at first asking Jan. 15 at Santa Anita, Concert Tour flashed high speed going six furlongs and kicked clear in hand. Next he showed his resolve to run down stablemate Freedom Fighter in the Feb. 6 San Vicente (G2).
But it was the Rebel, his two-turn debut, that announced his intent as a serious Derby contender. From the second the gate sprang open at Oaklawn, Concert Tour raced like a horse on a mission. He outbroke 6-5 favorite Caddo River and beat him to the early lead, thereby disarming his rival of his chief weapon. Concert Tour was in total command throughout, drawing off by 4 1/4 lengths.
As Life Is Good stargazes his way through the Derby trail, his erstwhile paddock buddy Concert Tour is keeping his mind on the game. Those contrasting personality traits, evident from babyhood, could come into play amid the hustle and bustle of Derby Day.
What a feat it would be for the Wests, two years on from Maximum Security, if Concert Tour and Life Is Good are fighting out the finish in Derby 147. 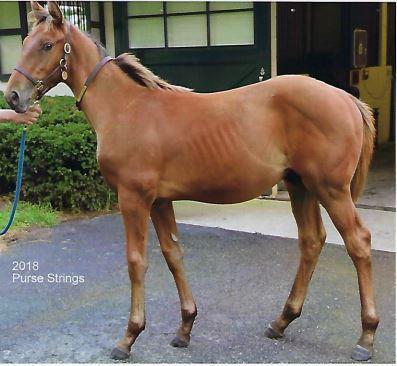