Tales from the Crib: Life Is Good

Mar 11, 2021 Kellie Reilly/Brisnet.com
Tweet
When early Kentucky Derby (G1) favorite Life Is Good extended his unbeaten record to 3-for-3 in the March 6 San Felipe (G2), the manner of his victory became a hot topic of conversation.

His imperious eight-length romp, in good time, underscored the idea that Life Is Good could give Hall of Fame trainer Bob Baffert a record-breaking seventh Derby win. Yet his bearing out significantly in the stretch also evoked comments – why was he drifting so much as to end up closer to the grandstand?
Hall of Fame rider Mike Smith told Santa Anita publicity that Life Is Good was preoccupied by the giant videoboard in the infield.
“When the big screen is lit up, they can see it,” Smith said. “He was actually looking at it walking to the gate, and he kept seeing the horses on the screen. I kept thinking he might do it again, and he did! That’s what he is looking at. In the mornings, he goes by the screen like it’s nothing because it’s not on. He was locked in on it down the lane today.”
That keen interest in scoping out his surroundings is nothing new for Life Is Good. In fact, it’s completely in character, going back to his baby days.
Life Is Good was bred by Gary and Mary West, best known for their homebred champion Maximum Security who was disqualified as the first-past-the-post in the 2019 Kentucky Derby. Like Maximum Security, he was raised at the Justice family’s Dell Ridge Farm in Kentucky, where the Wests board their mares. Unlike Maximum Security, Life Is Good sports a fashionable pedigree, as a son of leading sire Into Mischief and the well-bred mare Beach Walk. 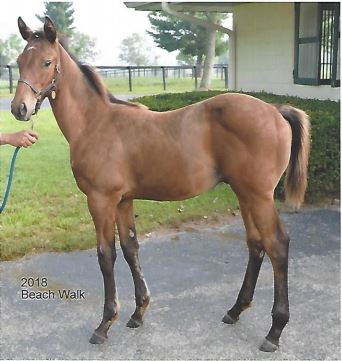 From the beginning, Life Is Good was an intensely observant type, as Dell Ridge manager Des Ryan recalled.

“He was always very inquisitive, always looking out the door, wondering what was going on around him,” Ryan said. “Nosy guy, always checking things out.”
The colt’s investigative nature was one of his charming personality traits.
“He didn’t have any problems. He was a very easy horse to be around, very straightforward and kind. An easy-going child,” Ryan summed up.
Life Is Good grew up with another West-bred on the 2021 Derby trail for Baffert, Concert Tour. But the two paddock buddies were split up as yearlings before reuniting later in the Baffert barn. The Wests breed to sell as well as to race some of their homebreds. Concert Tour was retained, while Life Is Good was among those earmarked for the Keeneland September Sale.
Cataloged during the elite Book 1 portion as Hip No. 253, and consigned by Paramount Sales as agent, the yet-unnamed colt sold for $525,000. You can see his calm demeanor and his intelligence-gathering - watch the ears - in the auction ring video from Keeneland:
The top bidder was the same partnership that had purchased future Triple Crown winner Justify, also at Keeneland September, three years previously – China Horse Club and Maverick Racing (a WinStar Farm entity).
Named by his new connections, Life Is Good learned his early lessons at WinStar. He rapidly stamped himself a star student, even during the breaking process of getting accustomed to having a saddle and rider. Indeed, by the time he was ready for farm trainer Destin Heath, he already had a big reputation.
“When the breaking crew at WinStar sent him to our training barn, they all said ‘watch this colt, he’s special,’” Heath said. “So from that point the pressure was on.
“He always had an ease in the way he traveled and trained, and when we began to breeze he separated himself instantly.”
Life Is Good continued his penchant for being aware of everything. He also hinted of his racetrack behavior of wanting to just go – fast.
“He was always very alert of his surroundings, and a very high-energy horse,” Heath added. “The most difficult part about training him at an early age was trying to throttle back in speed because he always wanted to do more.

Once shipped out west to Baffert, Life Is Good began serious training toward his career debut. His worktab preceded him, for he went off as the 1-5 favorite in a Nov. 20 maiden at Del Mar.
The buzz increased exponentially after Life Is Good aired by 9 1/2 lengths. He had a more personal cheering section tuning in from WinStar.

“It was a highly anticipated debut race at Del Mar and our whole crew watched,” Heath said.

The parallel with last year’s Derby champ Authentic was instant. Authentic was likewise a speedy son of Into Mischief, trained by Baffert, who had created a splash during Del Mar’s “Bing Crosby season” the prior November.
Life Is Good has furthered the parallel with Authentic by following the same itinerary in his subsequent starts. Both joined the Derby trail in the Sham (G3), passing their stakes and two-turn debut, and stayed unbeaten in the San Felipe.
Fans may remember that Authentic went through a wayward phase, especially his wandering around the stretch as he drew off in the 2020 Sham. Baffert himself mentioned it after Life Is Good’s rightward trajectory in the San Felipe.
“He’s still green,” Baffert told Santa Anita’s Ed Golden in the March 7 stable notes. “Remember Authentic did all that weaving one race…they’re still babies. They’re still immature. The main thing is he came out of it really well. We saw a lot of raw talent yesterday.”
Life Is Good will stick to Authentic’s agenda by making the Santa Anita Derby (G1) his final prep ahead of Churchill Downs. If he maintains his perfect record on April 3, he’ll one-up Authentic who suffered his first loss in that spot.
But the biggest difference is the timing. Authentic was competing in a pandemic-delayed Triple Crown season. He had extra time on the learning curve before putting it all together in a Kentucky Derby postponed to Sept. 5, 2020, elevating Baffert to a tie with the legendary Ben Jones as a six-time Derby-winning trainer.
Life Is Good has to master his craft by the traditional first Saturday in May. And he might have to beat his old pal – and current stablemate – Concert Tour. Although Concert Tour still carries the Wests’ colors, Life Is Good also showcases their fine breeding program, and both could offer a measure of Derby consolation after Maximum Security.
Smith has no doubt about the pure ability of Life Is Good, going so far as to invoke a sports icon, Louisville’s own Muhammad Ali:
“This horse is like that Muhammad Ali song. He floats like a butterfly, and stings like a bee.”

Photo credit: Life Is Good as a foal, by Sarah Munoz and courtesy of Dell Ridge Farm 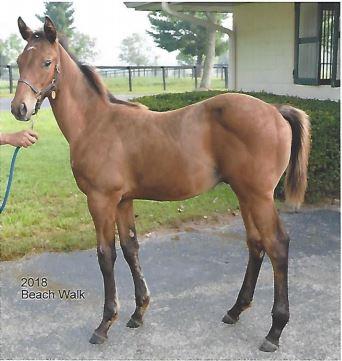