Tales from the Crib: Noble Indy

Kenny Troutt’s WinStar Farm is already in an enviable position as the co-owner of two premier Kentucky Derby (G1) contenders in Justify and Audible, both auction purchases. But the Versailles, Kentucky, establishment has two additional rooting interests in Derby 144. WinStar also bred Bolt d’Oro and Noble Indy. While Bolt D’Oro was sold as a yearling, Noble Indy was retained to race as a homebred, making for an incredible 20 percent of the Derby field bred or campaigned by WinStar.

That stat could have been 25 percent. Fellow WinStar homebred Quip earned a Derby spot as well, but connections believed he’d be better off freshening up and pointing toward the Preakness (G1) instead. Thus WinStar’s representation was whittled down from five to “just” the four – an accomplishment that symbolizes the farm’s success in complementary sectors of the breeding and racing business.

Noble Indy is from the first crop of Take Charge Indy, the 2012 Florida Derby (G1) winner who came out of a subpar run in his Kentucky Derby with an injury. The blueblood son of A.P. Indy and multiple Grade 1 heroine Take Charge Lady had a much happier experience back at Churchill Downs the following spring, romping in the Alysheba (G2) on Kentucky Oaks Day 2013.

Although Take Charge Indy’s four-year-old campaign was also cut short by injury, his younger half-brother, Will Take Charge, picked up the baton and turned in a strong second half of the season. Capturing the 2013 Travers (G1), Pennsylvania Derby (G2), and the Clark H. (G1) over older horses, as well as missing by a nostril in the Breeders’ Cup Classic (G1), Will Take Charge was voted champion three-year-old male. And dam Take Charge Lady was honored as Broodmare of the Year.

Take Charge Indy’s profile as an incoming stallion at WinStar was thereby raised twice over, and he attracted substantial books, boosted by WinStar’s own mares, in his first three seasons at stud. A half-sister of his kept the family in the news by producing 2014 Eclipse Award-winning juvenile filly Take Charge Brandi.

But his pedigree, and personal accomplishments on the racetrack, didn’t help his progeny sell as they began to enter the marketplace. Buyers typically look for precocity, and Take Charge Indy’s youngsters figured to take more time to come to hand. They tended to take after Dad – rangy horses who would get stronger with age, not promise to set the world alight at two.

Noble Indy fit the general pattern. Consigned by Denali Stud, as agent for WinStar, at the 2016 Keeneland September Yearling Sale, he could not get a bid past $45,000. His reserve, the minimum price set by the seller in advance, was not met, and WinStar kept him.

Later that same fall came a surprising development: Take Charge Indy was exported to South Korea. In the November 2016 announcement, WinStar President/CEO Elliott Walden explained that the Korea Racing Authority “simply made an offer that was too good to turn down.”

Noble Indy’s dam, Noble Maz, had an indirect connection to Walden. She descends from Niner’s Gal, a three-quarter sister to Ecton Park, who was a Grade 1-winning millionaire for Walden during his training career.

Noble Maz was an even bigger bargain as a yearling, bringing only $9,000 at Fasig-Tipton’s Eastern Fall Yearlings Sale in Maryland. A tough, hard-knocking sprinter who won six of 28 starts, she earned $327,340 along with a couple of stakes victories in Pennsylvania-bred company at Parx. She wired the 2010 Mrs. Penny on the turf, and in 2011, she dug in to beat males in the Mr. Jenney H. on the main track.

Visiting Take Charge Indy in her second year as a broodmare, Noble Maz produced her bay colt on March 31, 2015.

“He was a quiet foal, didn’t necessarily stand out, no trouble at all,” recalled WinStar Broodmare Manager Jeff Danford.

“Easy to deal with and never hurt. He was a nice looking foal and correct.

“He was raised at the Galaxy Barn.”

The barn name is a natural outgrowth of the “Star” in WinStar. In fact, the farm had sponsored a turf stakes race at Keeneland from 2000-05 dubbed the WinStar Galaxy (the race once again known as the First Lady). The astronomical theme ties into a feature of the nearby landscape along Big Sink Road. As that implies, there’s a mile-wide depression in the area, and evidence suggests it’s a meteorite crater.

If it would be a bad pun to say that Take Charge Indy’s stud career has witnessed a meteoric rise, the fact remains that he’s taken off and made a huge impact with his first crop. As of this writing, Take Charge Indy is dominating the earnings list for “second-crop” sires, those who have current three-year-olds and new two-year-olds starting to hit the track.

After Noble Indy scored on debut for trainer Todd Pletcher, Repole Stable bought a share in the smart prospect. He has reflected the new partnership by alternating the WinStar and Repole silks.

When Noble Indy stamped his Derby ticket with a hard-fought decision in the TwinSpires.com Louisiana Derby (G2), he showed the same grit as his dam, Noble Maz. Sadly, Noble Maz did not live to see her son excel, for she died last year.

But proud papa Take Charge Indy might not be gone for long. WinStar took the precaution of including a buy-back clause in the contract with the Korea Racing Authority, and reports indicate the possibility of pursuing another deal to return Take Charge Indy home.

In the meantime, Take Charge Indy is in a position to try for a Derby-Oaks double with Noble Indy and Forward Gal (G3) victress Take Charge Paula. His value to breeders has increased, and presumably along with it his price tag. 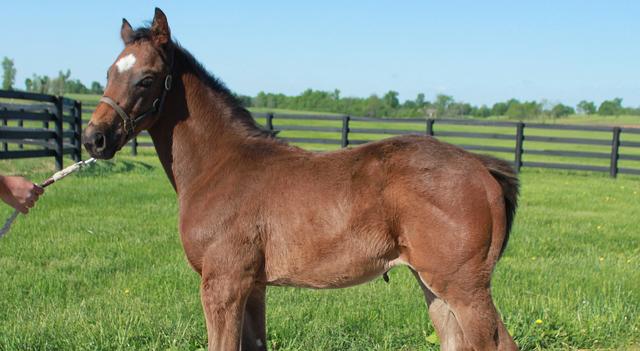