Tales from the Crib: Sonneteer

Sonneteer, the third of Calumet Farm’s trio to make the starting gate for the 2017 Kentucky Derby (G1), was also the unlikeliest. And not just because he’s still a maiden after 10 starts who needed defections to draw into the field.

Like Sunland Derby (G3) winner Hence (whose Tale is here) and Louisiana Derby (G2) runner-up Patch (whose Tale is here), Sonneteer is a homebred who was purchased in utero. Calumet bought his dam, Ours, for $100,000 at the 2013 Keeneland November Breeding Stock Sale while she was carrying her foal by Midnight Lute.

Sonneteer is the second foal produced by Ours, an unraced half-sister to 2009 Hopeful (G1) winner Dublin. By the well-bred Unbridled’s Song stallion Half Ours, Ours descends from a deep family. Her dam, Classy Mirage, was a high-class sprinter who earned her marquee victory in the 1995 Ballerina H. (G1) at Saratoga. Classy Mirage is herself a half-sister to Missy’s Mirage, heroine of the 1992 Hempstead H. (G1) and Shuvee H. (G1).

At another remove, this maternal line is responsible for outstanding performers of greater distance capacity: Java Gold, who swept the 1987 Travers (G1), Whitney (G1), and Marlboro Cup (G1); Indian Skimmer, a multiple champion in Europe who won the 1987 French Oaks (G1) and later beat the boys in the Champion (G1) at Newmarket, the Phoenix Champion (G1) in Ireland, and the Prix d’Ispahan (G1) at Longchamp; and Hall of Famer Dark Mirage, who ran away with New York’s “Filly Triple Crown” in 1968.

It’s a mark of great quality that the family has continued to produce over the long haul – not just decades, but going back a century. To mention only Sonneteer’s direct line of descent, his sixth dam, Sunday Evening, won the 1949 Spinaway S. at Saratoga. Her dam (Sonneteer’s seventh dam), Drowsy, landed the 1937 Ashland at Keeneland. Drowsy’s granddam (Sonneteer’s ninth dam), Idle Dell, was a Saratoga stakes winner in 1921.

Thus Ours has an excellent genetic foundation to build upon – just what Calumet has endeavored to do by breeding her to classically bred stallions.

Her March 1-born colt by champion sprinter Midnight Lute, that came with the package so to speak, wouldn’t seem to fit the desiderata on the surface. Yet Midnight Lute was himself by Real Quiet, who came so close to a Triple Crown sweep in 1998. Hall of Famer Bob Baffert, who trained them both, believed that Midnight Lute was distance-limited due to an illness, not any inherent lack of stamina in his make-up.

“Early on, (Midnight Lute) had an infection in his throat,” Baffert told Santa Anita publicity back in 2013. “That’s why his throat went bad. He would have run all day, Midnight Lute. Unfortunately, he had 60 percent air capacity, but all his foals breathe fine.”

Hence was a “more forward horse” who came around a lot quicker than the other two, as Brennan recalled. The handsome chestnut was a pretty aggressive type eager to get on with the job.

Patch, in contrast, was “very laid back, pretty much like a pony!”

Brennan believes that gentle disposition has helped Patch adjust to losing his left eye – a setback that a highly-strung sort might have found more difficult.

As a “big, long-striding horse” with a “ton of class,” Patch was the type who’d improve with time.

Sonneteer, however, was the odd one out in those early school days.

“Out of the three, you wouldn’t put your finger on him,” Brennan said. “He didn’t act like a Derby contender.”

Labeling him as one “hard to figure out,” Brennan said “he’d be looking at everything going on.”

As Brennan adds, though, Sonneteer has obviously gotten better since then. It just goes to show that with the passage of time, horses can jump up and surprise you.

Shipped to trainer Keith Desormeaux at Santa Anita early last summer, the still-unnamed juvenile posted his first recorded move on June 14. One month later, he was named Sonneteer as an allusion to “Lute” in his sire’s name.

As his race record suggests, Sonneteer has been a work in progress. But he’s getting there, and it’s not impossible for a maiden to win the Kentucky Derby. Just ask Buchanan (1884), Sir Barton (1919), and Broker’s Tip (1933). 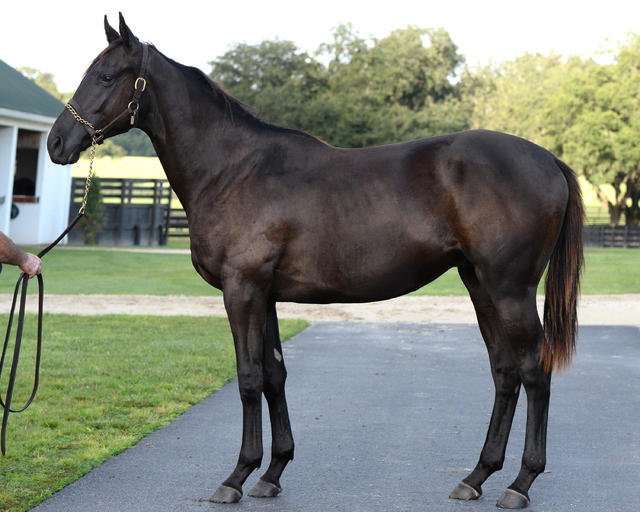