Tales from the Crib: Rock Your World

Ron McAnally will be remembered forever for training the legendary John Henry, the rags-to-riches gelding with an indomitable character, and fellow Hall of Famers Bayakoa and Paseana. But now at the age of 88, the horseman has a chance of adding an extraordinary dimension to his legacy – as the co-breeder of Kentucky Derby (G1) contender Rock Your World with his wife, Debbie.

If Rock Your World can stay unbeaten on the first Saturday in May, McAnally would enter rarefied company as a Hall of Fame trainer who bred a Derby winner.
In the early 20th century, John Madden bred and sold five Derby heroes – Old Rosebud (1914); Sir Barton (1919), the first to sweep what would come to be called the Triple Crown; Paul Jones (1920); Zev (1923); and Flying Ebony (1925). Madden’s lone Derby win as an owner/trainer came with a colt he bought, Plaudit (1898).
Rock Your World was likewise sold as a youngster, so he can’t help McAnally’s 0-for-10 record as a trainer in the Derby. Yet his historical stature would take on greater proportions.
Another Hall of Fame trainer who didn’t win the Derby, but left an enduring legacy through the horses he bred, is John Nerud. By any measure, Nerud should have won his lone Derby attempt in 1957, when future Hall of Famer *Gallant Man had the race in the bag before jockey Willie Shoemaker misjudged the wire and lost a heartbreaker.
Nerud isn’t listed officially as the breeder of a Kentucky Derby winner, but that recordkeeping technicality obscures the truth. For as the Tartan Farms brain trust, he was the driving force behind the breeding of a series of major winners including Unbridled, the 1990 Kentucky Derby and Breeders’ Cup Classic (G1) champion.
Indeed, Unbridled’s ancestry is replete with Nerud’s handiwork. Nerud bred and owned Unbridled’s sire, Fappiano, who was himself out of a mare by Nerud’s all-time great, Dr. Fager. Unbridled’s female line was cultivated by Nerud as well, and his granddam was by In Reality, another influential sire who was bred on Nerud’s counsel.
Thus it’s a poetic twist that McAnally’s Derby hope is himself indebted to Nerud’s bloodlines. Rock Your World is inbred to Fappiano, and his broodmare sire, Empire Maker (by Unbridled), is inbred to In Reality.
Ron and Debbie McAnally have been nurturing Rock Your World’s female line, however, for a few generations, through a series of mares known for class and surface versatility. The development of his family is a testimony to their acumen and perseverance.
The McAnally mares reside at Don Robinson’s Winter Quarter Farm, the Bluegrass nursery famous for foaling and raising Zenyatta. Robinson has been involved with generations of Rock Your World’s family, going back to fourth dam Light a Charm who became their foundation mare.
“I credit Ron for recognizing the talent in Light a Charm,” Robinson said of the trainer’s decision to buy her as a broodmare although she never made it to the races.
Debbie bred Light a Charm to Olympio, a Grade 1-winning millionaire trained by her husband. The resulting foal was a multiple Grade 2 victress in Olympic Charmer.
When Olympic Charmer retired and began her broodmare career in 2001, Robinson recommended that she visit a new stallion just off the track himself – the “Iron Horse” Giant’s Causeway. The McAnallys followed his advice, even though it involved shipping the mare to Ireland where he entered stud at Coolmore’s headquarters.

From little acorns ... here's some wandering goofball at Coolmore in late March of 2002 meeting the freshly hatched filly who would someday produce Liam the Charmer. That's Olympic Charmer, the proud mom. pic.twitter.com/cETJdW3gLL

That foal turned out to be Charm the Giant, herself a Grade 3 winner also trained by Ron for Debbie. Charm the Giant is the dam of two graded stakes performers, Grade 2 hero Liam the Charmer who was sold as a yearling, and multiple Grade 1-placed stakes scorer Charm the Maker, retained by the McAnallys.
Charm the Maker has inherited the “heat” of her sire, Empire Maker, whose own dam, Toussaud, was known for her mercurial temperament.
“She is a bit of a hothead,” Robinson said of Charm the Maker. “She is fire. You always had to finesse her – still do.”
Charm the Maker bankrolled $340,290 from a record of 19-3-2-3, reflecting her family’s effectiveness across every surface. The winner of the Sharp Cat S. and Adoration S. on synthetic, she placed in the Oak Leaf (G1) on dirt, Hollywood Starlet (G1) on synthetic, and the Unzip Me S. (to Known Agenda’s dam, Byrama), Swingtime S., and Autumn Miss (G3) on turf.

GoGo aboard Charm the Maker for Hall of Fame Trainer McAnally @clockerscorner @santaanitapark in 114.3 pic.twitter.com/4eIlu88H

Upon her retirement, Charm the Maker was bred to a past McAnally star, unbeaten Argentine champion Candy Ride. Her first foal, She’s Our Charm, was offered as a yearling at Keeneland September but bought back by McAnally for $600,000. Racing exclusively on turf so far, She’s Our Charm notably finished third in the Dec. 27 Robert J. Frankel (G3).
Another tryst with Candy Ride produced a colt, born February 28, 2018. As usual for the mare, it was a difficult delivery, but mother and son did well in the aftermath.
“He was really attractive, as most of the mare’s offspring are,” Robinson said.
The colt we now know as Rock Your World was not as fiery as his dam.
“He has a leveler head, a little bit cooler head. I particularly like that in a colt. He was a cool guy…a very straightforward horse. Got good sense. Fun to work with.”
Moreover, Rock Your World had the shape of a colt who would excel over a route of ground, once he filled into his frame.
“He always struck me as a two-turn horse,” Robinson added. “He looked elegant – a classic horse – from a foal.” 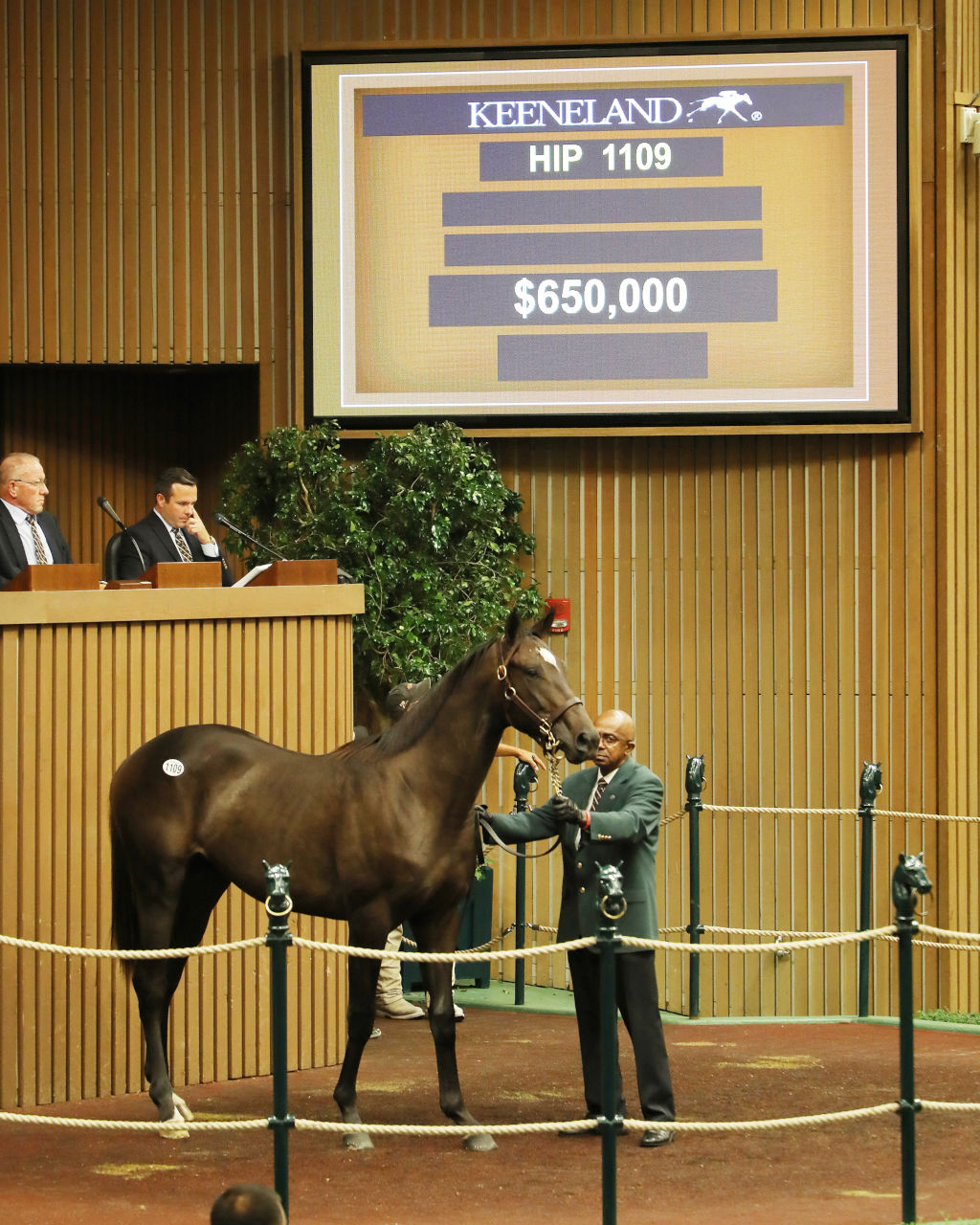 As a yearling, Rock Your World presented a contrast with a fellow Candy Ride colt on the farm, an Arnold Zetcher homebred out of multiple Grade 2 winner Always a Princess, who “looked like a right-now, push-button” horse.
The two ventured to Keeneland September as part of the Winter Quarter consignment, cataloged in proximity to each other during the sale’s fifth session. The Zetcher colt, Hip No. 1062, set off the fireworks when bringing $1 million from Speedway Stable, as you might expect for one with such a racy appearance. Ironically, the flashier colt, now named Contango, has yet to start.
Rock Your World was not lacking in appeal either, for buyers looking for his type. Entering the ring a little later as Hip 1109, he brought $650,000 – the joint second-highest price of the day behind only his Winter Quarter companion – on a banner day for the farm.
The buyer, Sapphire Stable, was a vehicle for trainer John Sadler and noted bloodstock adviser David Ingordo. At the same sale back in 2005, and from the same consignor, Ingordo purchased Zenyatta.
As Rock Your World began posting works last summer for Sadler, his younger full brother was slated for Keeneland September. But McAnally withdrew him. The yearling had no setback. Rather, McAnally just couldn’t bear to part with him. He’s now a two-year-old named He’s Our Maker. The colts have a baby full sister, after another challenging birth for Charm the Maker on March 25.
Owned by the partnership of Hronis Racing and Talla Racing, Rock Your World started out on turf. Given his versatile pedigree, and full sister’s prowess on the surface, that made sense on its own. But his trainer had a grander design.
Sadler later cited the example of the Richard Mandella-trained Omaha Beach, who gained experience on turf before switching successfully to dirt and becoming the 2019 Kentucky Derby favorite. Although he ended up scratching, his turf-to-dirt trajectory inspired Sadler to bring Rock Your World along likewise.
Looking sharp in his turf sprint debut on Jan. 1 at Santa Anita, Rock Your World made it 2-for-2 while stretching out to a mile in the Feb. 27 Pasadena. Sadler set his sights on the Santa Anita Derby (G1), and Rock Your World took to the dirt just like his sire Candy Ride. He upset Bob Baffert’s Medina Spirit in frontrunning fashion, not only securing a spot in the Kentucky Derby, but stamping himself as a threat at Churchill Downs.
With just three starts under his belt, all at his home track of Santa Anita, Rock Your World is conceding experience to most of his Derby rivals. But he’s displayed serious talent, with any amount of upside.
“He’s got a lot in front of him,” Robinson summed up.
So are the historical precedents of Madden and Nerud, tantalizingly within reach for McAnally. 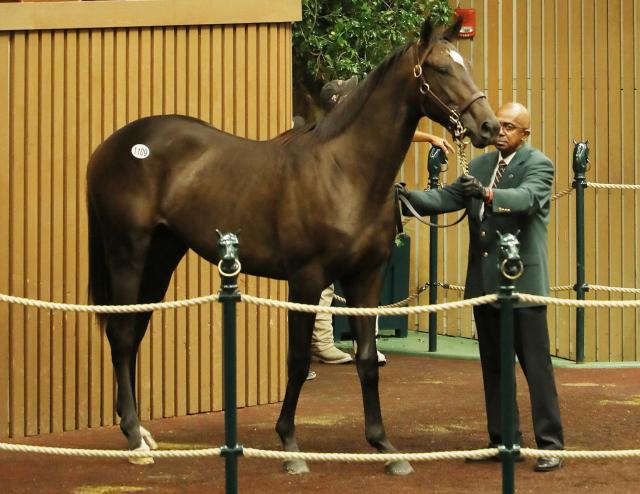