Tales from the Crib: Smile Happy 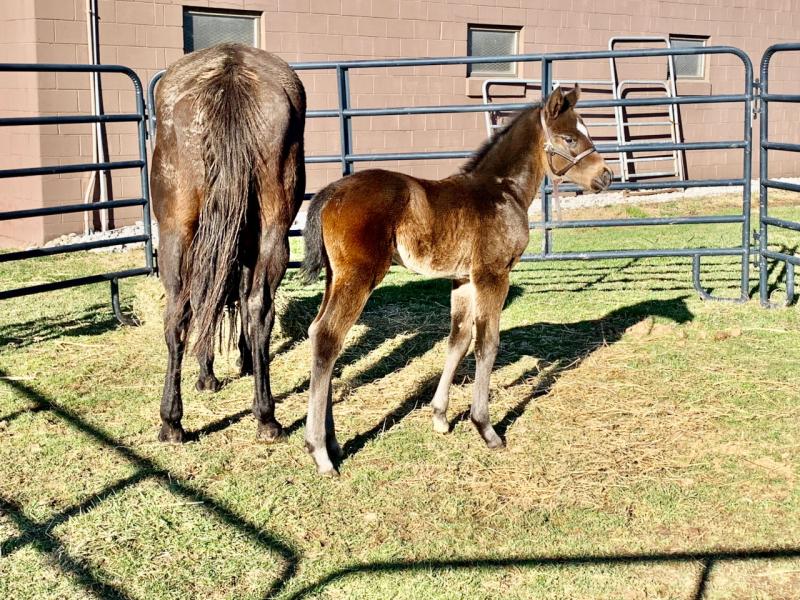 Smile Happy with his dam, Pleasant Smile (Photo courtesy of Xavier Moreau)
Foaled just steps away from where 2006 Kentucky Derby (G1) star Barbaro was born, Smile Happy hopes to add to the legacy of his Nicholasville, Kentucky, birthplace on the first Saturday in May.
Smile Happy was bred in partnership by Xavier Moreau’s Moreau Bloodstock International and White Bloodstock. Moreau has also been responsible for a past Kentucky Derby runner, Wildcat Red, as well as a Kentucky Oaks (G1) alumna in Bushfire. Both were overachievers, bargain offspring of bargain mares – quite an accomplishment for a small operation.
At his former base in Florida, Moreau bred multiple Grade 1 heroine Bushfire, who captured the 2006 Ashland (G1), Acorn (G1), and Mother Goose (G1). Bushfire was third across the wire in the Kentucky Oaks, only to be demoted to sixth for interference in the stretch.
The first Moreau production to make the Kentucky Derby, Wildcat Red, likewise emerged from his time in the Sunshine State. Co-bred with Winter Racing Enterprise, Wildcat Red won five of his first six starts. The scrappy colt romped in the 2014 Hutcheson (G3), battled to a narrow victory in the 1 1/16-mile Fountain of Youth (G2), and just missed to Constitution in the Florida Derby (G1). Wildcat Red had a troubled trip in the Kentucky Derby, winding up 18th behind California Chrome, but he rebounded and ultimately retired with more than $1.1 million in earnings.
That same fall, Moreau would acquire Smile Happy’s dam, Pleasant Smile, at the 2014 Keeneland November Sale. Purchased for $57,000 by Moreau and a partner under the name of Blacktype Bloodstock, the eight-year-old broodmare was consigned by Adena Springs, agent.
Pleasant Smile had won only three small races at the $7,500 claiming level, and her immediate pedigree wouldn’t excite those chasing the latest commercial flavor of the month. But her ancestry was replete with quality, with 2003 Derby champ Funny Cide among her maternal relatives, and she looked the part. Moreau recalled the about 16-hand mare as “very deep in the body, good-looking.”
Moreau several months later moved to the Bluegrass, near Nicholasville just south of Lexington, on Barbaro Lane. Barbaro’s birthplace, Springmint Farm, is on that road fittingly renamed in tribute to the late Derby hero.
Barbaro is memorialized at Springmint itself, and a plaque marks the stall that welcomed him into the world. A few doors down is the stall where Smile Happy would arrive.
Bred to champion Runhappy (a son of 2010 Derby winner Super Saver) in the spring of 2018, Pleasant Smile delivered her dark bay colt on Feb. 20, 2019. He was a fine one from the beginning. 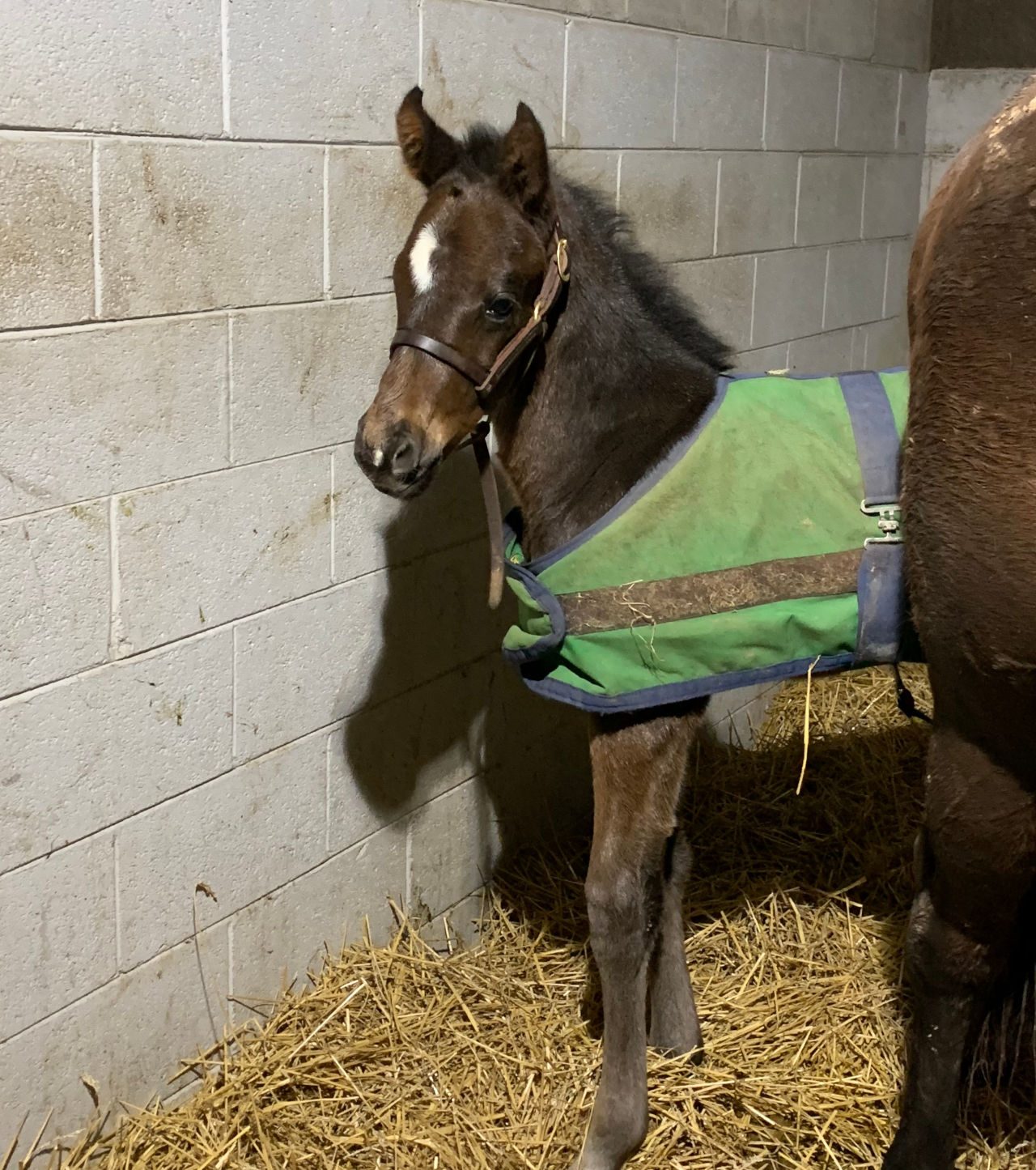 “Smile Happy was a very easy-going colt since birth,” Moreau commented. “He was very correct and strong the day he was born.

“I try to breed attractive athletes – he has a nice head with big, smart eyes.”

The yet-unnamed colt was slated to be sold as a weanling at Keeneland November, and there was no shortage of interest in him in the build-up. The nearly nine-month old was inspected “at least 150 times in two days,” yet showed poise throughout the process.

“He was an absolute professional at the sale,” Moreau said. “He stood like ‘look at me,’ always good on his feet showing well from the first show to the last.” 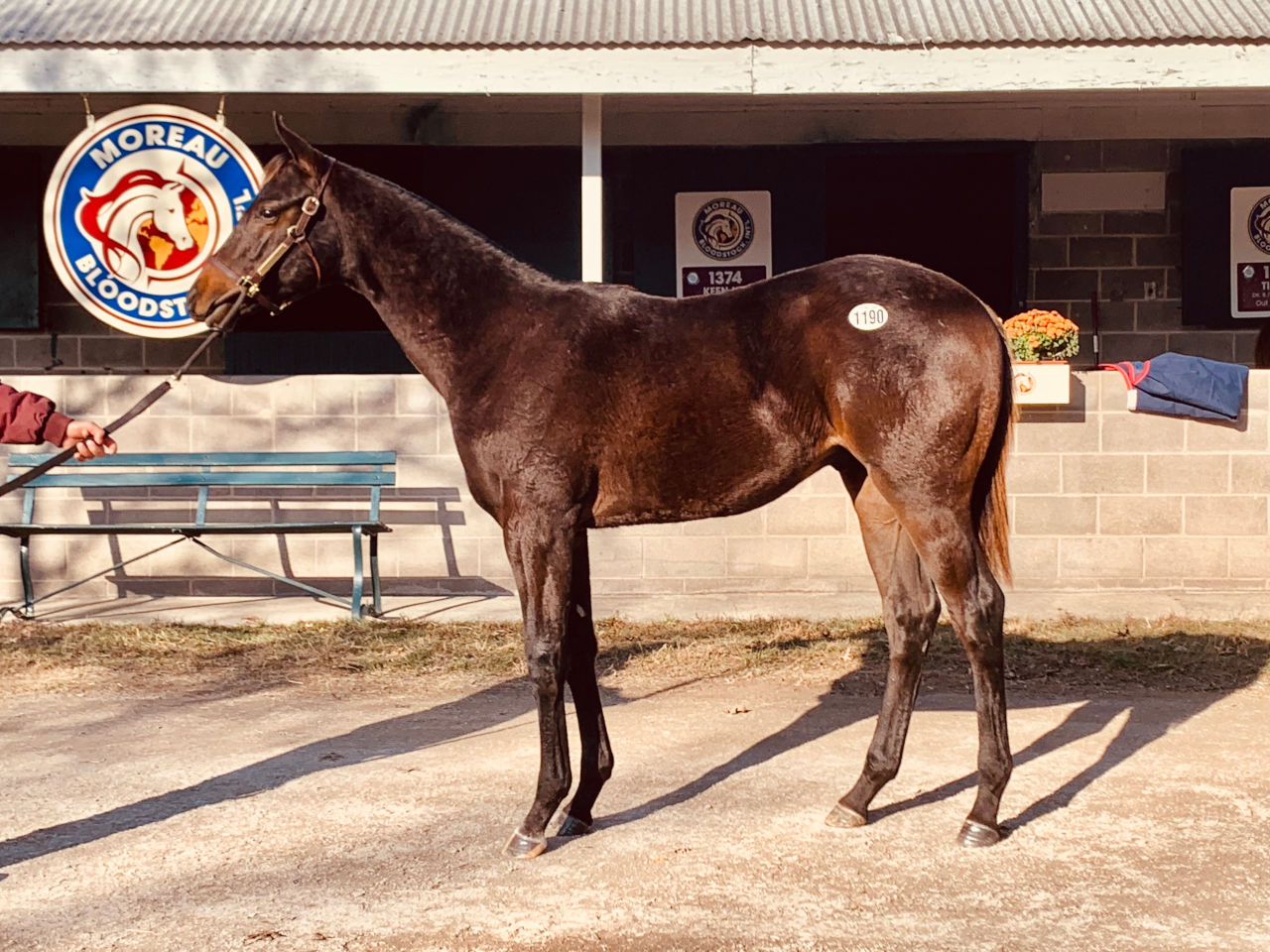 “I had three groups of potential buyers who wanted to buy him before the auction,” Moreau revealed. “Made an offer which I didn’t take, and I was very happy that I didn’t take it, after he did sell at the Keeneland November auction!”

When the colt took his turn through the ring as Hip No. 1190, he brought $175,000. The winning bidder, Cooper Bloodstock, was a group including Adrian Regan of Hunter Valley Farm. Ironically, the Moreau-bred Bushfire herself had spent time at Hunter Valley, but in entirely different circumstances, as a brief freshening in the midst of her racing career.

Smile Happy would be prepared for resale as a yearling under the Hunter Valley banner. The handsome youngster made a deep impression as he developed at the Versailles, Kentucky, farm.

While he was kind and well-mannered, the yearling’s defining characteristic reflected pure class.

“The lasting feature of this horse for me was his presence,” Regan summed up. “He knew he was good.”

Yet by the time Fasig-Tipton’s Selected Yearlings Showcase rolled around, an ad hoc creation due to the pandemic’s roiling of the 2020 sales calendar, the market wasn’t that interested in Runhappy as a sire. His first crop was hitting the track, but the general insistence on quick returns, and the what-have-you-done-for-me lately mentality, worked against Runhappy as his second crop was trying to gain attention as sales yearlings.

Trainer Ken McPeek, however, is never one to be put off by that. Famous for buying future Hall of Famer Curlin for $57,000 and champion Swiss Skydiver for $35,000, he went to $185,000 to snare Smile Happy for Lucky Seven Stable.

“People were cooling off on Runhappy,” Regan noted. “It’s a testament to the horse that he brought the price he did.”

Indeed, Smile Happy was the most expensive of the 50 Runhappy yearlings sold in 2020, selling for more than four times the sire’s average price of $39,524.

Regan was involved in another syndicate (headed by Ted Campion) that sold a colt to McPeek for $210,000 at Keeneland September. That yearling, prepared on Campion’s Dundrum Farm, turned out to be Rattle N Roll. A fellow colorbearer of Michael J. Mackin’s Lucky Seven Stable, Rattle N Roll romped in the Breeders’ Futurity (G1) before Smile Happy made his career debut.

But Smile Happy soon rocketed to the forefront, ranking as the favorite, among the individual betting interests, in the first four pools of the Kentucky Derby Future Wager. After his victorious premiere on Oct. 29 at Keeneland, Smile Happy turned in a sparkling display in the Nov. 27 Kentucky Jockey Club (G2), emulating grandsire Super Saver who dominated the same Churchill Downs feature in 2009. The form of Smile Happy’s victory held up, as he beat future graded winners White Abarrio, Classic Causeway, and Call Me Midnight. Although he sustained his first loss in the Feb. 19 Risen Star (G2) at Fair Grounds, Smile Happy was a strong-finishing second from a tactically tough position.

For his final Derby prep, Smile Happy returns to the scene of his maiden conquest in Saturday’s Blue Grass (G1) at Keeneland. Rattle N Roll is also entered, the first time that the Lucky Seven stablemates have crossed swords in a race.

Smile Happy will likely be favored to revisit the winner’s circle, where he can strike a pose and attract admiration. But whatever transpires on the track, he’ll always know that he is good. 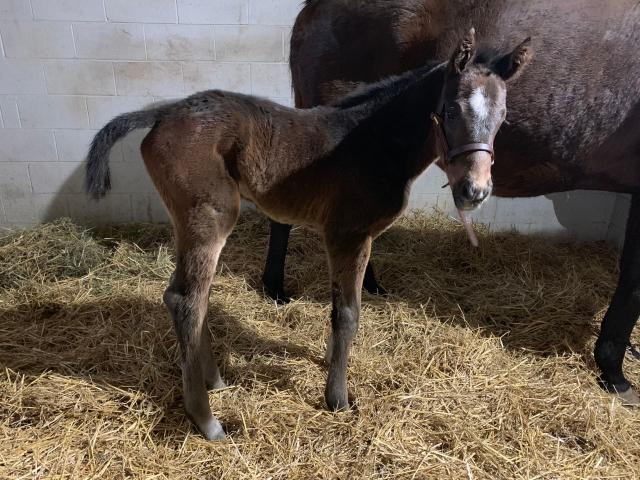