Tales from the Crib: Sole Volante 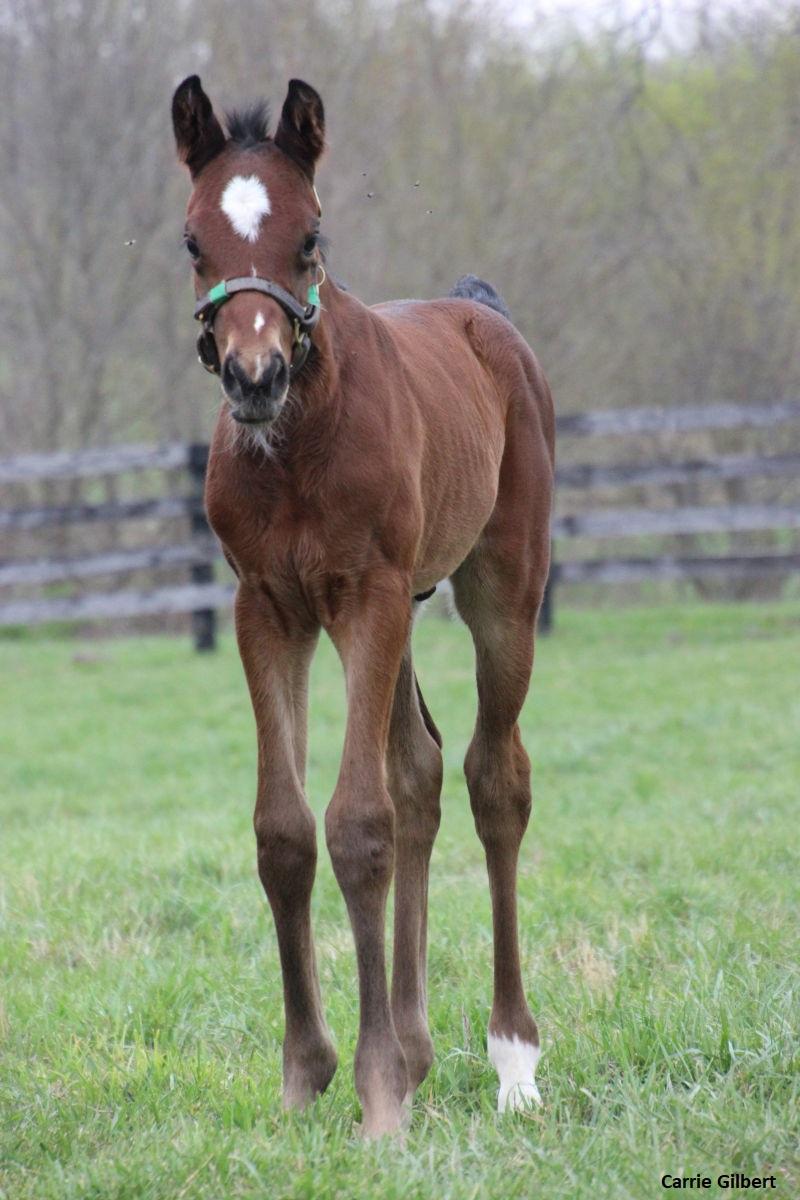 Three decades after Miesque made Breeders’ Cup history by repeating in the 1988 Mile (G1) at Churchill Downs, her descendant Sole Volante goes for Kentucky Derby (G1) glory beneath the Twin Spires. Despite his pedigree, the Derby hopeful was a bargain-basement buy in both of his appearances at auction.

Sole Volante, like his famous ancestress, hails from one of the great international breeding operations – the Niarchos Family’s Flaxman Holdings. The same family was responsible for a major 2019 Derby competitor in War of Will, who was hampered by Maximum Security on the far turn, wound up unplaced, but rebounded to win the Preakness (G1).
While War of Will was a Niarchos product through his female line, Sole Volante’s pedigree has an even greater Niarchos stamp. His sire and dam are homebreds with Miesque featuring in both of their bloodlines.
Sole Volante is by French classic winner Karakontie, a great-grandson of Miesque, who emulated her by winning the 2014 Breeders’ Cup Mile. Sole Volante’s dam, Light Blow, is by another outstanding Niarchos miler in Kingmambo, himself a son of Mr. Prospector and Miesque. 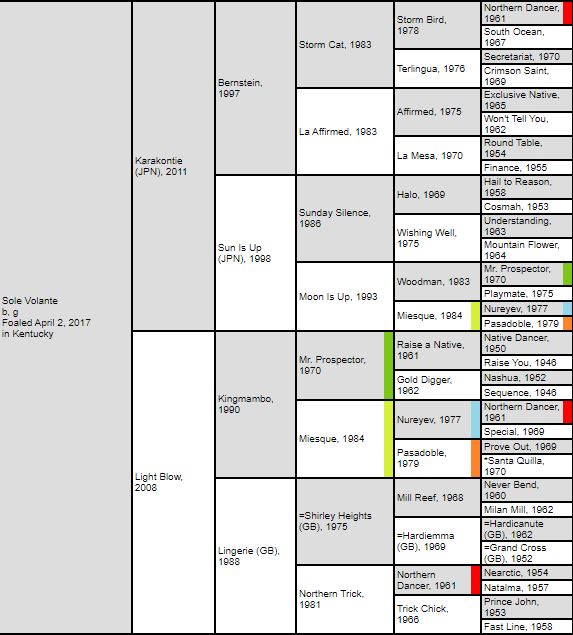 Light Blow’s maternal line is no less accomplished. Her full sister Light Shift captured the 2007 Oaks (G1) at Epsom, and went on to produce multiple Group 1 star Ulysses. Another full sibling to Light Shift and Light Blow, Strawberry Fledge, is the dam of high-class Cloth of Stars who twice placed to Enable in the 2017-18 runnings of the Prix de l’Arc de Triomphe (G1). (Ironically, Cloth of Stars beat “cousin” Ulysses who was third in that 2017 Arc.) Further back in the same family comes Main Sequence, the U.S. champion older male and turf male of 2014.
Light Blow, like Light Shift, was trained by the late Sir Henry Cecil in England, but she did not show the same talent. After going winless in her first four starts, she found the right spot to score – a Warwick handicap over 1 7/8 miles – and retired with her maiden-breaking mission accomplished.
Residing at the Oak Tree division of Lane’s End Farm, where the Niarchos Family boards their Kentucky mares, Light Blow had four foals before visiting Karakontie in his first season at stud. Their son, Sole Volante, was born on April 2, 2017. 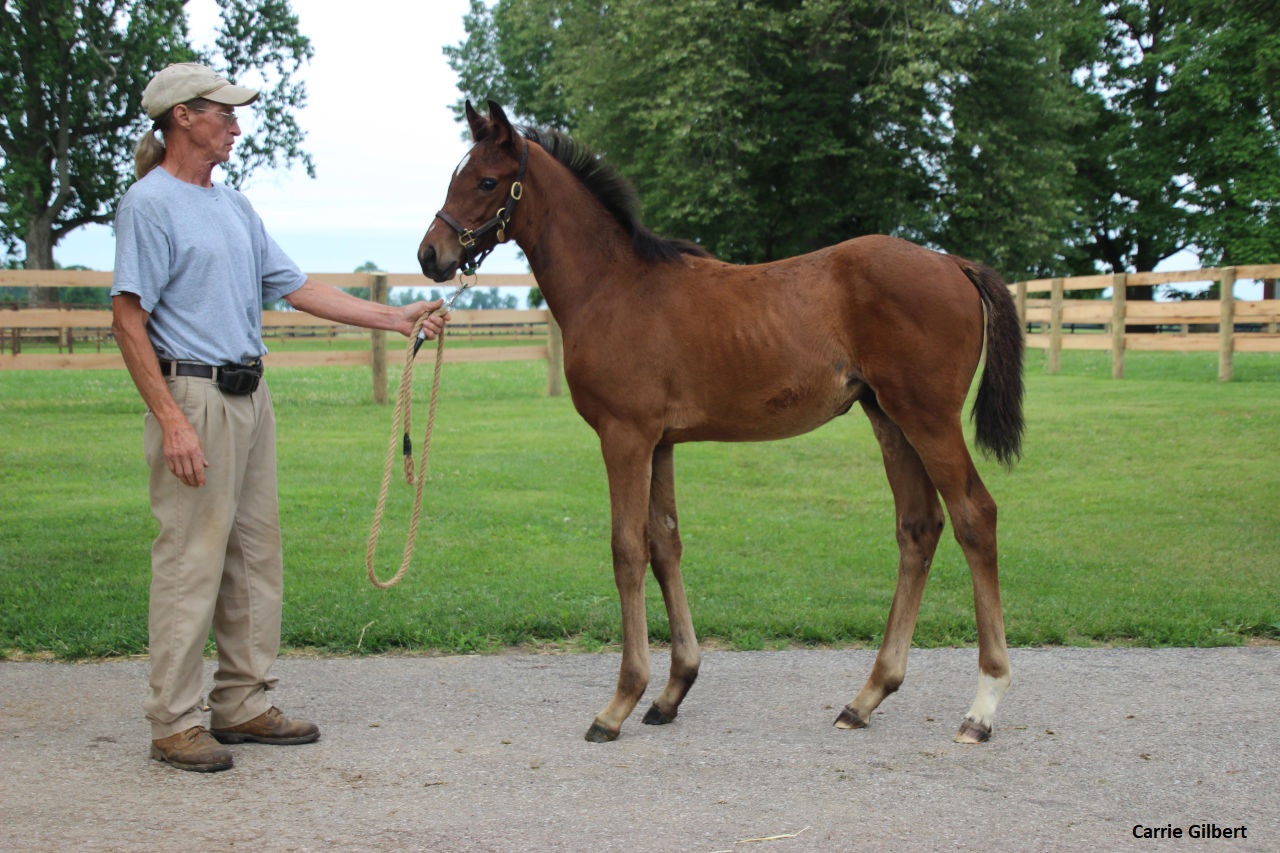 Oak Tree manager Callan Strouss remembers the bay colt as an easy foal to deal with, the kind who did everything right and never caused any problems.
When Sole Volante was entered in the 2018 Keeneland September Yearling Sale, he was buried deep in the catalog, all the way back as Hip No. 3494. That was during the 11th of 13 sessions at the marathon sale.
The yet-unnamed colt was mostly overlooked, but Marcos Arenas did not miss him. Long associated with Hartley/De Renzo Thoroughbreds in Florida, Arenas was just starting out his own independent venture appropriately named New Hope AB. He was searching for a yearling with upside to resell as a 2-year-old, and Keeneland September is a well-stocked emporium. The trick, though, is to find those prospects without spending too much, in hopes of making a profit or at least avoiding a loss.
Arenas had the faith to take that gamble with Sole Volante. Few others were willing to do so, between the dam’s relatively light produce record by that point, and any potential scruples about him physically. Arenas was the winning bidder at only $6,000. 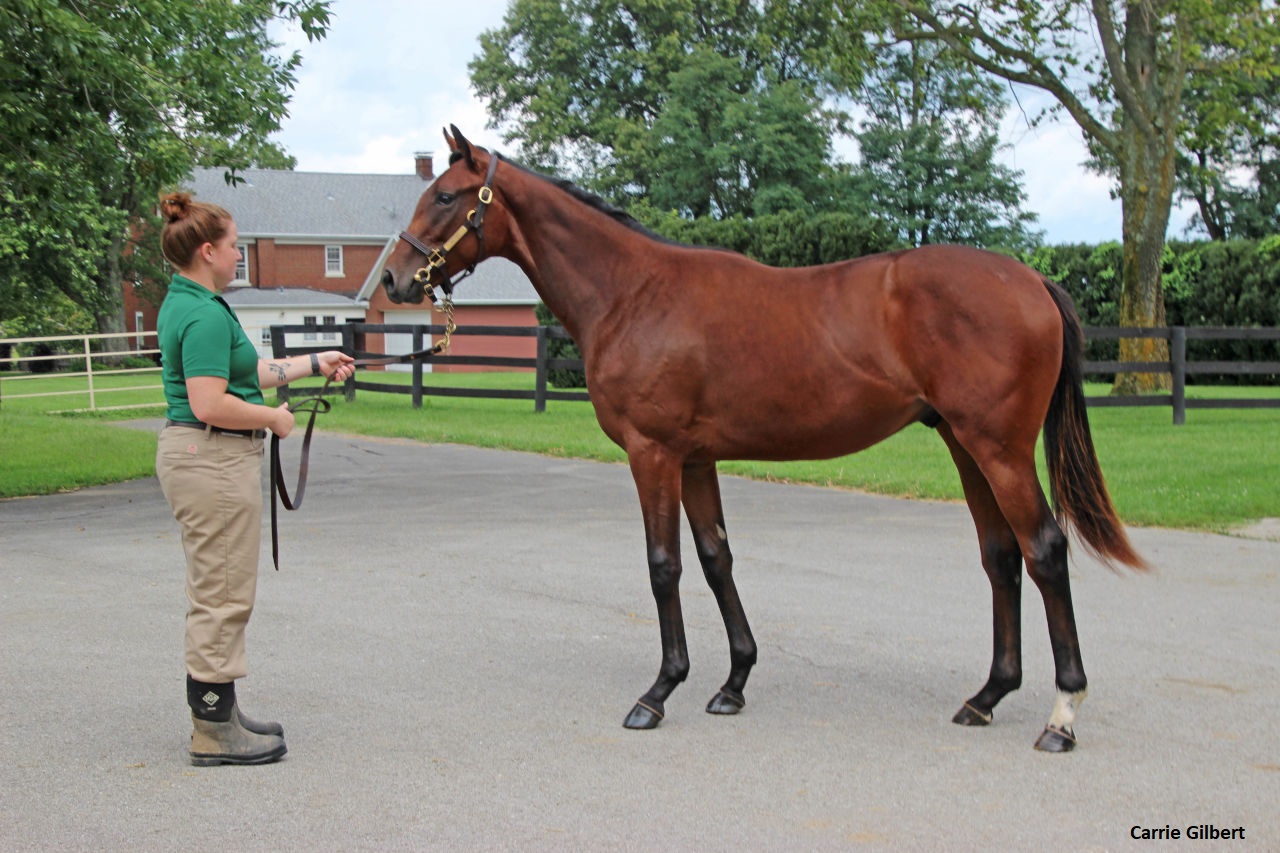 By the time Arenas offered him as a 2-year-old in training at OBS April, Sole Volante had received a catalog update. Now two of his half-siblings had earned the all-important “black-type” in stakes. While half-sister Light of Joy was a distant second in the Galtres S. at York just prior to Keeneland September, half-brother Explode had emerged afterward in Canada, romping in the Ascot Graduation S. at Hastings. (Explode has added to his resume since then, being awarded the 2019 Canadian Derby [G3] via disqualification and missing by a nose in the British Columbia Derby [G3]).
Sole Volante still wasn’t exactly a hot property. But he did breeze a furlong in :10 2/5 at the under tack show, revealing a fluent action.
French expat Patrick Biancone, who trained back-to-back Arc winners All Along (1983) and Sagace (1984), was looking to buy his daughter Andie a horse for her 22nd birthday. He liked what he saw from the Niarchos-bred colt and snapped him up for $20,000 – under his $22,000 limit for her 22 years of age.
Biancone decided to name him after his sire. Karakontie means “flying sun” in Mohawk, and Biancone invoked the Italian equivalent, “Sole Volante.”
“Sole Volante’s pedigree is very good,” Biancone later told Gulfstream Park publicity, “and we were lucky to get him for not much money.
“I was drawn to him for his pedigree and the way he moves. He’s very easy to train, lovely to be around, and my daughter loves to ride him as well.”
Andie, who works alongside her father as an assistant trainer/exercise rider, would discover that her birthday present had real ability. But before Sole Volante showed his class on the racecourse, he had a problem that was holding him back – namely, twisted testicles. As Andie Biancone told Mike Kane of Thoroughbred News Service, that was why he had to be gelded.
Once free of that discomfort, Sole Volante could indeed fly. He began his career on turf, in keeping with his Niarchos bloodlines, and displayed a terrific turn of foot to win his first two starts. After beating Derby rival King Guillermo in last fall’s Pulpit S., Sole Volante took his game to the Gulfstream dirt and placed a fine third in the Mucho Macho Man S.
Ironically, the owners best known for campaigning race namesake Mucho Macho Man – Reeves Thoroughbred Racing – wanted to get involved in Sole Volante. Dean and Patti Reeves purchased a majority share in the gelding.
Sole Volante promptly went out and scored his biggest victory so far in the Sam F. Davis (G3). His rallying second to King Guillermo in the Tampa Bay Derby (G2) was respectable too, considering the moderate pace.
Although Sole Volante comes off his only unplaced effort so far, a sixth in the Belmont (G1), he was wheeling back on short rest that day, and he’s been sparkling in his recent turf works. Since the Churchill Downs dirt can be quite hospitable to turfy types, he has a realistic chance of handling it well.
If Sole Volante can spring the upset, he’d put the Niarchos Family in exclusive company as the breeders of both Kentucky and Epsom Derby winners. (Two of King Guillermo’s co-breeders are in the same enviable position.) The Niarchos-bred Kris Kin, who landed the 2003 Epsom Derby, was himself a $275,000 Keeneland September yearling.
Sole Volante illustrates the power of the Niarchos pedigrees, even when they’re available at bargain prices. The birthday gift has proven to be more of a surprise package than the Biancone family could ever have imagined. 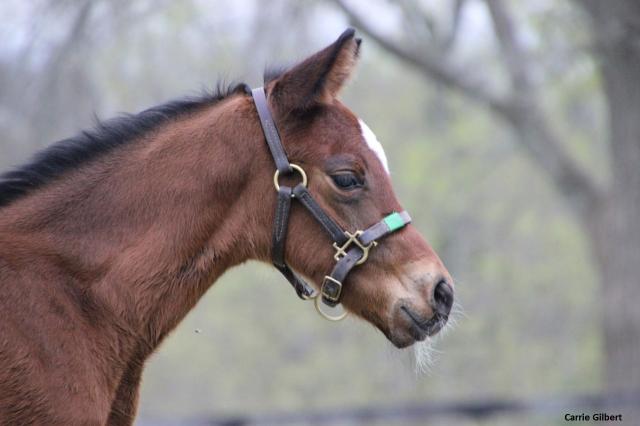