Tales from the Crib: Untrapped

The connection actually goes to the human side of Indian Creek too. The farm was acquired in 1971 by the Clay Ward Insurance Agency, whose leading partners were David C. Parrish and “Bull” Hancock of Claiborne.

Rodes “Shack” Parrish, David’s son, now presides over Indian Creek in addition to being part of the management of Clay Ward. He recounted the backstory of Untrapped’s female line, from great-granddam Yarn and granddam Castanea to dam Exit Three.

“We’ve had three generations of the family,” Parrish said. “We bought Yarn from Claiborne.”

Yarn was a beautifully bred daughter of Mr. Prospector and Grade 3 winner Narrate. Her two-years-younger full sister was Preach, the 1991 Frizette (G1) winner. Preach produced a fantastic first foal for Claiborne – Pulpit, the 1997 Blue Grass (G2) and Fountain of Youth (G2) hero who was fourth in that year’s Kentucky Derby (G1) and later a top sire.

At the same time, Yarn was emerging as a fine broodmare for Indian Creek. She produced Tale of the Cat, the brilliant winner of the 1997 King’s Bishop (G1) who went on to success at stud, and Minardi, a $1.65 million yearling who became the English and Irish champion two-year-old colt of 2000. Two of Yarn’s fillies were notable matrons for other connections – once-beaten stakes scorer Spunoutofcontrol, the dam of multiple Grade 2 victor Fed Biz, and Myth, the dam of Johannesburg, the champion juvenile colt in both the United States and Europe in 2001.

“Then Castanea was basically her last foal,” Parrish said of Yarn’s filly born in 2001.

“She had a very bad foaling, and we could never get her back in foal.”

Castanea was sired by South African superstar Horse Chestnut, then standing at Claiborne. A Triple Crown winner in his homeland, Horse Chestnut made a scintillating U.S. debut in the 2000 Broward H. (G3) at Gulfstream, only to sustain a career-ending injury.

Although Castanea was unraced herself, her offspring have tended to sell very well at auction. Her first foal, the Giant’s Causeway filly Kulik Cat, commanded $750,000 as a Keeneland November weanling in 2005. That made the decision to go back to Giant’s Causeway a fairly obvious one.

Unfortunately, the resulting foal, Exit Three, came down with an illness that compromised her immune system.

“It knocks them back, and they just can’t catch up,” Parrish said of its after-effects on foals and yearlings.

“She had all sorts of infirmities. We brought her to the sales (at Keeneland September in 2008), basically bought out their share” for $35,000.

“We worked out a deal with (Hall of Fame trainer) Jonathan Sheppard, and we were gonna race her.”

But that plan didn’t come to fruition either, and Exit Three retired to the Indian Creek broodmare band. Sheppard retained his share in her, which is how he came to be a co-breeder of 2017 Derby hopeful Untrapped.

Exit Three began by visiting the A.P. Indy stallion Flatter in her first two breeding seasons. Both foals returned a profit at the Keeneland September Yearling Sale, and went on to become winners.

In her third year as a broodmare, Exit Three went to a younger representative of the A.P. Indy line, also standing at Claiborne, in Trappe Shot.

“We’ve been playing around with similar sire lines with her,” Parrish said. “That seemed to be what kept popping up, what keeps working. Didn’t want to really get away from that.”

The match with Trappe Shot, however, offered an added attraction. Since he is by Pulpit’s son Tapit, Trappe Shot is a descendant of Preach. Exit Three descends from the maternal line of Preach’s full sister, Yarn.

“We sold him then because we felt like we were riding a wave with Trappe Shot,” Parrish said, adding that “it was a good return on investment.”

The buyer at Keeneland January, Gabriel Duignan’s Springhouse Farm, could say the same. When the yet-unnamed colt returned for Keeneland September, he went to B.L.B. for $150,000. 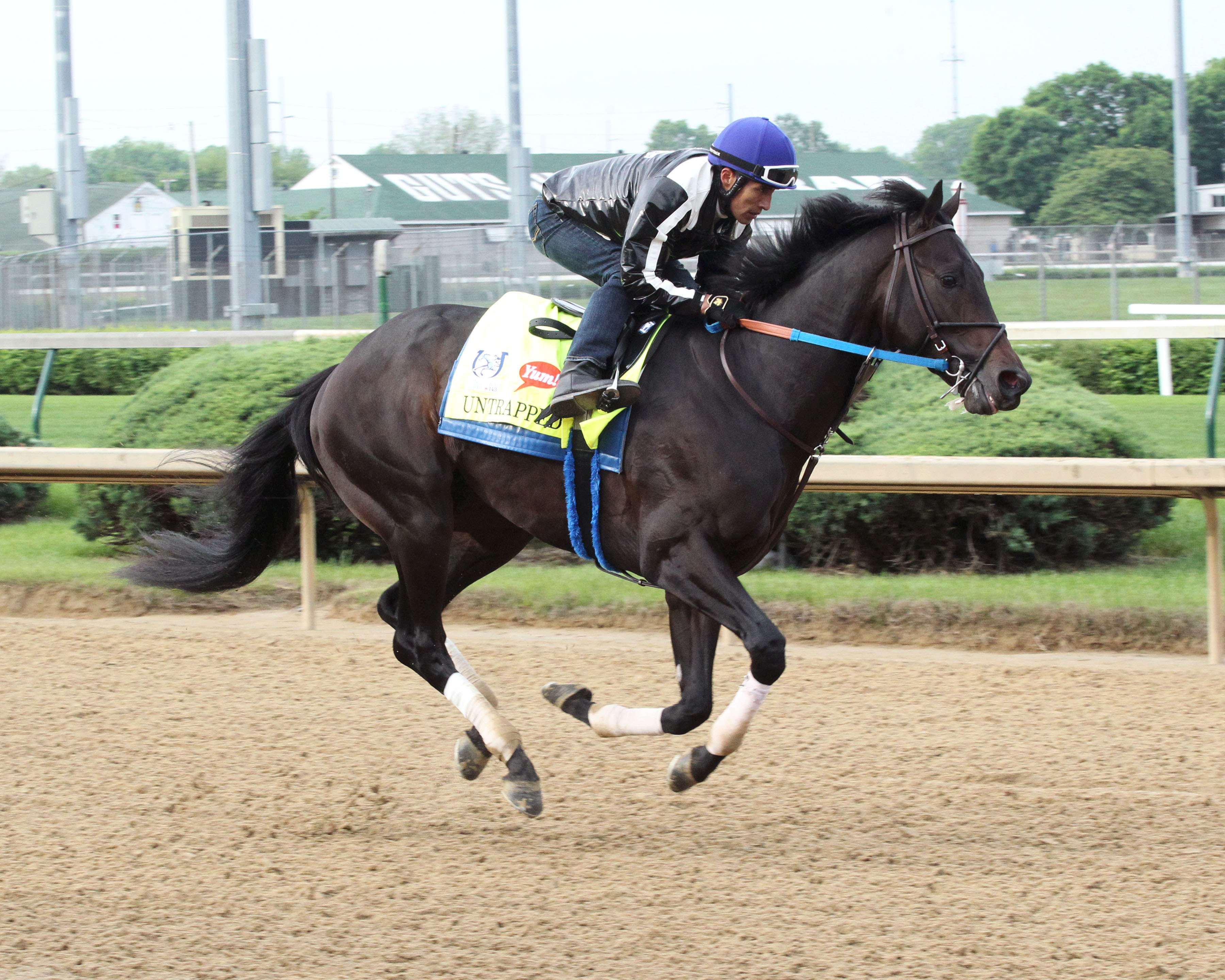 According to subsequent reports, the purchase was made on behalf of country music singer and Thoroughbred owner/breeder Toby Keith. The Trappe Shot colt then went to school at Jimmy Crupi’s New Castle Farm near Ocala, Florida, the same academy as Always Dreaming (whose Tale is here).

Offered at the Ocala Breeders’ Sale Company April Sale, the dark bay colt worked one furlong at the under tack show in :10 1/5. He ended up not selling in the auction ring, since the top bid of $145,000 didn’t meet the seller’s reserve price. But a private sale, to current owner Michael Langford, was concluded for $125,000.

Last May, he officially became “Untrapped,” a clever play on his parents’ names, if you “exit” from a “trap.”

His dam, Exit Three, was well named herself. World War II buffs would recognize its association with the Normandy landings on D-Day, in particular the ferociously-fought sector called Omaha Beach.

“I’ve been on a war kick,” Parrish said, “especially with Giant’s Causeway and D-Day. On Omaha Beach, there was the beach, and the marshlands, and one causeway going inland.”

The exits inland, from several points on the landing zone, were labeled, and “Exit Three was the major one.”

Her name reflects her life story: awfully tough going in the beginning, but at long last a way through, and ultimate success. From her sick babyhood, and not making it to the races, she’s now perfect as a broodmare. Exit Three has produced a foal every single year, the latest a month-old filly by 2013 Derby winner Orb born April 9, and her three foals old enough to have raced so far are all winners.

Parrish added a few other of his names commemorating D-Day.

“We have another one, Tare Green, and the landing zone, Fox Green.

“Then we have a War Front filly, who we sold, named Chilbolton – the last base in England that my father flew out of for D-Day. He landed on D plus 6 (i.e., June 12, six days after the initial June 6 landing).”

So if you’re a World War II aficionado looking for a hunch play, you’ve got more than Battle of Midway (whose Tale is here). Exit Three’s son fits as well. 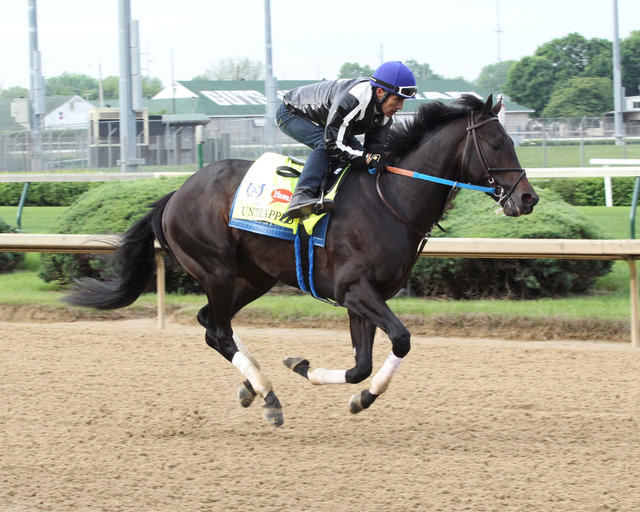