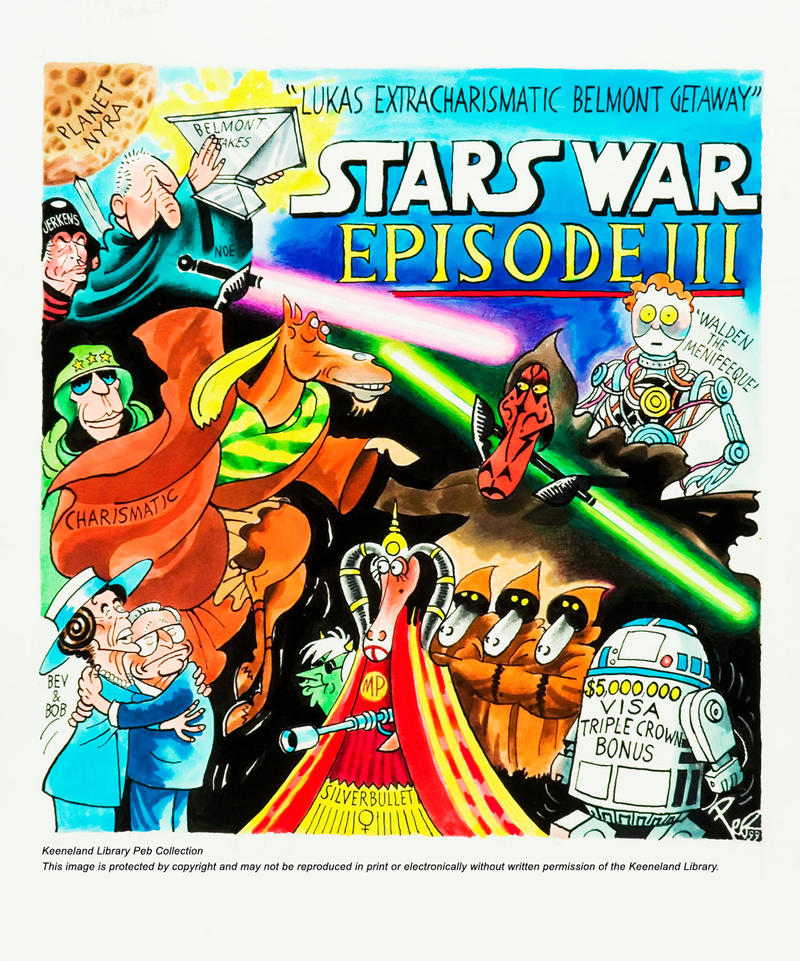 Peb Bellocq's parody of Lucasfilm's Star Wars: Episode I, released in May of 1999, features racehorses Charismatic, Silverbulletday, and Menifee before the 1999 Belmont Stakes and Charismatic's career-ending injury. 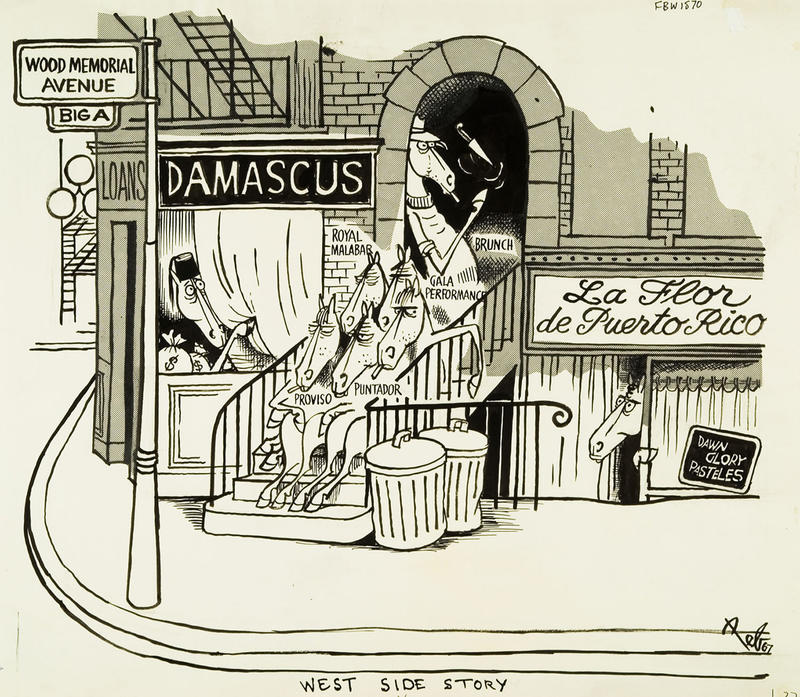 Peb Bellocq's artwork depicts Hall of Famer Damascus, Horse of the Year in 1967, with racehorses Brunch, Royal Malabar, Puntador, Gala Performance, Proviso, and Dawn Glory in a parody of the musical West Side Story. (Courtesy of the Keeneland Library Peb Collection. This image is protected by copyright and may not be reproduced in print or electronically without written permission of the Keeneland Library.) 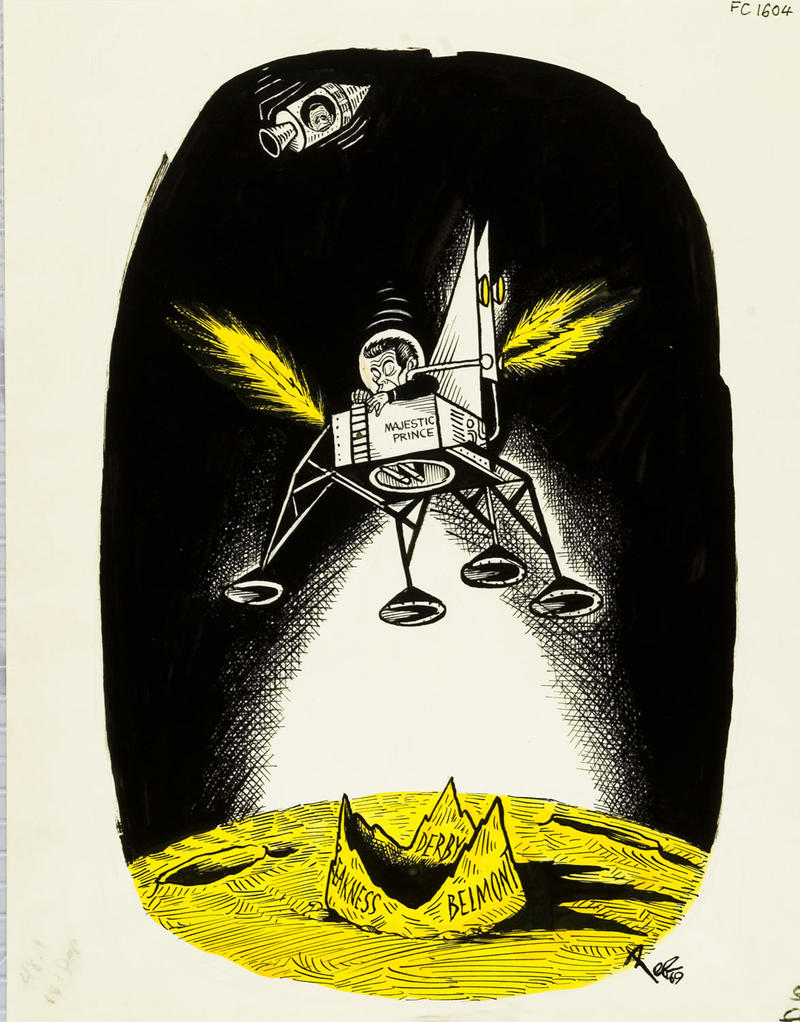 Peb's artwork depicts U.S. Racing Hall of Famer Majestic Prince in a Triple Crown "landing." Also depicted are jockey Bill Hartack, Jr. and Majestic Prince’s trainer, former jockey and U.S. Racing Hall of Famer Johnny Longden. (Courtesy of the Keeneland Library Peb Collection. This image is protected by copyright and may not be reproduced in print or electronically without written permission of the Keeneland Library.) 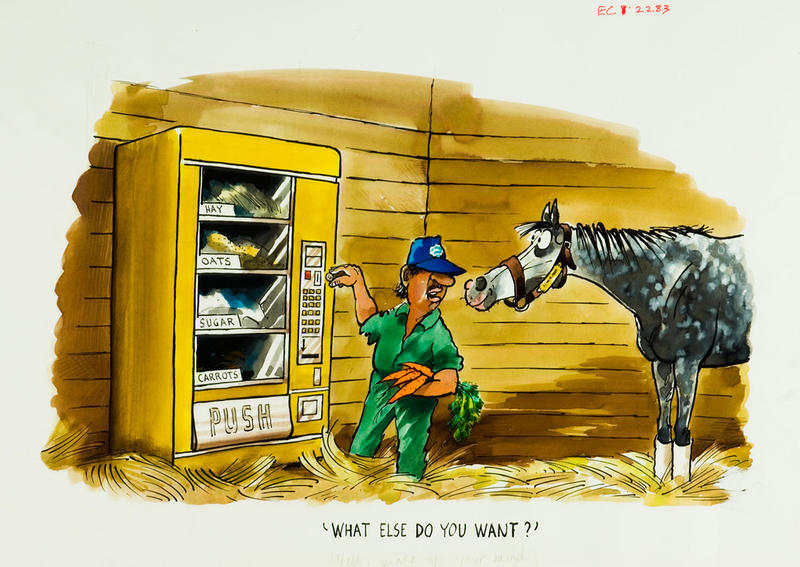 The Kentucky Derby is deeply woven into the fabric of Americana. This iconic racing event goes beyond horse racing and touches many facets of history, culture, and leisure, and this series examines some of these ties. This week’s Kentucky Derby Americana feature focuses on art.

Called “the turf world’s Michelangelo,” Pierre Bellocq, better known as Peb, made large contributions to Churchill Downs and the Kentucky Derby. Quite literally large. One of his showstopping murals on the second floor of the clubhouse measures 36 feet by five feet.

Completed in 2005, it depicts every jockey to win the first 130 editions of the Kentucky Derby, from African American jockey Oliver Lewis, who piloted Aristides to victory in the first Derby in 1875, to Stewart Elliott, who rode Smarty Jones in 2004. The bigger the caricature, the more times they’ve won.

In preparation, Peb researched photographs of the jockeys and their silks and created a mock-up one-fifth the size of the mural. Most of the final version was painted in a warehouse in Bristol, Pennsylvania, before it was installed in Kentucky.

The mural is a success, and, in 2008, Churchill Downs commissioned Peb for a piece showcasing the 104 trainers who captured the Run for the Roses. For several years, Peb updated each painting after the race.

Peb was born into a family of jockeys, trainers, and breeders in France in 1926. As a kid, he sketched horses and jockeys at his father’s work. He began sketching racing professionally in 1945.

His work caught the attention of Laurel Race Course owner John D. Shapiro, who commissioned Peb to create logos, program covers, and posters. Peb flew to America for the job on a cargo plane and was accompanied by a racehorse. This work led to the publication of his first American cartoon on April 1, 1955 in the Morning Telegraph, which was then the sister paper of Daily Racing Form, a favorite of handicappers. He worked for DRF until 2008.

From 1958-1961, he also created cartoons for Sports Illustrated. His political cartoons were regularly published in The Philadelphia Inquirer and The New York Times.

In addition to the murals at Churchill Downs, Peb’s work is featured at tracks across the country, including Aqueduct, Belmont Park, Del Mar, Oaklawn Park, and Arlington Park. 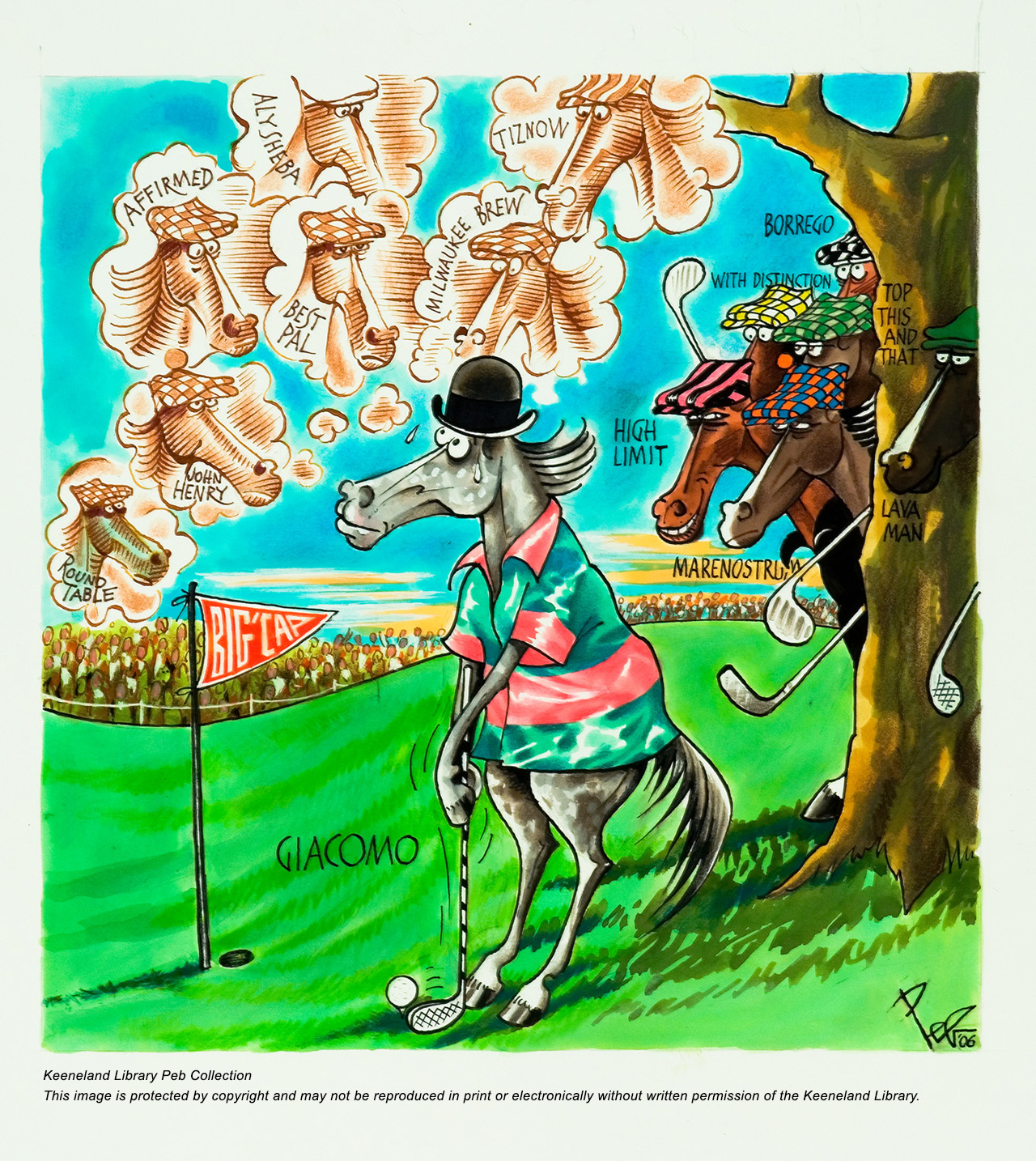 Peb received The Jockey Club Medal in 2016 and an Eclipse Award for Outstanding Contributions to Racing in 1980. The French government awarded him the Chevalier des Arts et des Lettres, the Republic of France’s highest honor to artists, in 1983. The National Cartoonist Society awarded Peb the 1991 Sports Cartoon Award & later the 1999 Newspaper & Magazine Illustrator award.

Peb is in his mid-90s and lives in Princeton, New Jersey. In October, he attended the Maryland Million Day, which he enjoyed immensely. 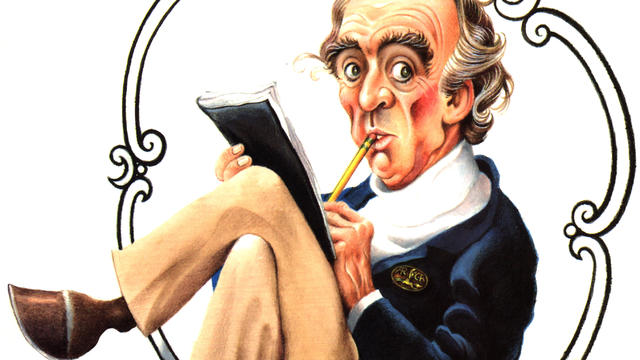