Four of the seven fillies in Sunday’s $200,000 Santa Ynez Stakes (G2) at Santa Anita are trained by Bob Baffert, including the top two from the Dec. 5 Starlet (G1), Varda and Kalypso.

The Starlet circumstances played to Varda’s strengths. As Kalypso tired after setting a fast pace in her first two-turn try, Varda rolled from last to overtake her down the long Los Alamitos stretch. Varda also had previous experience over a route, when a distant second in the Chandelier (G2) to now-retired stablemate Princess Noor (who was pulled up in the Starlet). Regular rider Drayden Van Dyke looks to keep their successful partnership going.
The Santa Ynez could present more of a level playing field for Kalypso in the rematch. Two starts back, Kalypso broke her maiden in the 6-furlong Anoakia on this track. Aside from cutting back in distance Sunday, Kalypso removes blinkers – a key equipment change for Baffert; lands a better post 7; and gets a rider switch to Joel Rosario.
Baffert’s other two, Exotic West and Frosteria, are capable of stepping up in their stakes debut. Exotic West prevailed in her first start at Del Mar with Abel Cedillo. Frosteria, a Godolphin homebred by Frosted out of $2.3-million earner Hystericalady, has shown promise despite being a thrice-raced maiden. Second in all three outings, Frosteria now picks up Hall of Famer Mike Smith.
The Michael McCarthy-trained Nasreddine, who beat Frosteria in a Del Mar maiden, was subsequently third in the Starlet. Queengol, winner of her debut over Kalypso, has since finished second in a pair of sprint stakes for John Sadler. Unable to catch an improved Kalypso in the aforementioned Anoakia, Queengol was beaten further by Astute in the Desi Arnaz.

On paper, Brilliant Cut has class questions after breaking her maiden for a $50,000 tag at Del Mar. But trainer Doug O’Neill claimed her out of that race, and he’s come close to upsetting two major races this fall with longshots – Hot Rod Charlie at 94-1 in the Breeders’ Cup Juvenile (G1), and The Great One at 33-1 in the Los Alamitos Futurity (G2). 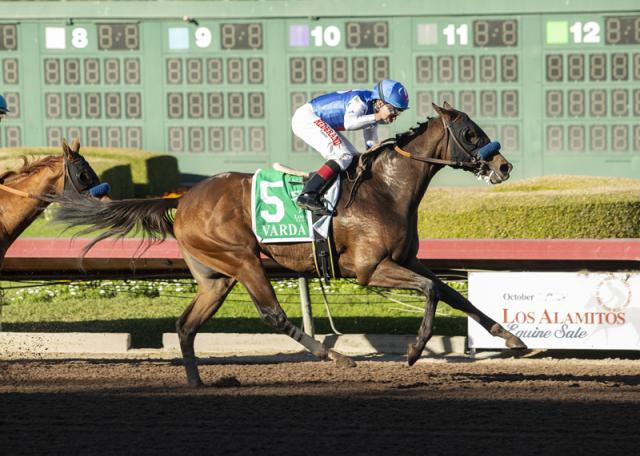