A new leader will take charge of the Japan Road to the Kentucky Derby after Sunday’s Hyacinth at Tokyo, and two unbeaten sons of American Pharoah – Cafe Pharoah and Nile River – are prominent aspirants for the role.

The penultimate race of the series, the Hyacinth offers points on a 30-12-6-3 scale to the respective top four. The enhanced points structure already represents a terrific opportunity for up-and-comers to make a splash going into the final scoring event, the March 28 Fukuryu at Nakayama. The standings are guaranteed to get a shake-up now that the top five on the leaderboard are not in the Hyacinth, most notably Dieu du Vin who was among the early probables but bowed out.

Cafe Pharoah, a $475,000 OBS March juvenile, ran away with an about 9-furlong event for newcomers at Nakayama by 10 lengths. The son of Grade 2 winner Mary’s Follies went wire to wire that day, and now faces a class test while cutting back to a metric mile. The tactically astute Mirco Demuro picks up the mount for trainer Noriyuki Hori.

Nile River, a $775,000 purchase at Fasig-Tipton’s Gulfstream Sale, has the advantage of a win over this track and trip. The Hideaki Fujiwara pupil employed a stalk-and-pounce style to dispatch fellow newcomers here Nov. 9, and now gets the services of Shane Foley.

Tagano Beauty, by Henny Hughes, is another proven in these conditions. Impressive when overturning well-regarded filly Serein in a course-and-distance allowance to go 2-for-2, Tagano Beauty was a creditable fourth in the Asahi Hai Futurity (G1) on turf. After a sixth in the grassy Shinzan Kinen (G3), however, it appears that he’s much more effective on the dirt.

Yaugau, whose only loss came on debut to Serein, has since won two straight for Naosuke Sugai. Beautifully bred as a son of Gold Allure and a Tiznow mare descended from Chris Evert, he lures Christophe Lemaire back into the saddle.

Godolphin’s homebred Longonot is not lacking in the pedigree department either as a Pyro half-brother to 2014 Dubai World Cup (G1) winner African Story. Although a non-threatening sixth to Yaugau in a Nakayama allowance, he’s better when striding forward early, as exemplified by his recent Tokyo allowance score at this trip.

Rounding out the Triple Crown-nominated runners is Daimei Corrida, who has not raced since his third in the initial scoring race, the Nov. 23 Cattleya Sho here. The son of Eskendereya earned 2 points that day but must improve to make an impact in this deeper affair.

Meisho Tensui, the only other with points on the board, has 2 from his fourth in the Dec. 18 Zen-Nippon Nisai Yushun. By the Unbridled’s Song stallion Dunkirk, Meisho Tesnui opened his career by winning both starts at Tokyo, including a defeat of Daimei Corrida. His two ensuing losses have come in stakes, but with useful efforts, and a return to Tokyo might help. Also exiting the Zen-Nippon Nisai Yushun are sixth-placer Morino Break and ninth Chimera Verite (who had won a stakes two back at Monbetsu).

Adding intrigue is the unbeaten filly Reine Blanche, who’s disposed of the boys in both a Hanshin newcomers’ race and a Kyoto allowance. The daughter of Kurofune hails from the extended family of all-time great miler Miesque. Herrschaft, fourth to Reine Blanche in their mutual debut, has gone on to win twice at Kyoto. As a son of champion Will Take Charge, Herrschaft is entitled to be stronger for his rematch with Reine Blanche.

The other filly in the line-up, Ultramarine, has more to prove after needing four starts to break her maiden. A similar point applies to the Goldencents colt Jet Max, who finally conquered a case of seconditis when prevailing at Kokura recently. Taisei Policy, an upset winner on debut at Tokyo, has found it tougher in allowances and comes off a third to Longonot.

Here’s the finalized race card for the Hyacinth, with local odds as reflected overnight going into Sunday (japanracing.jp): 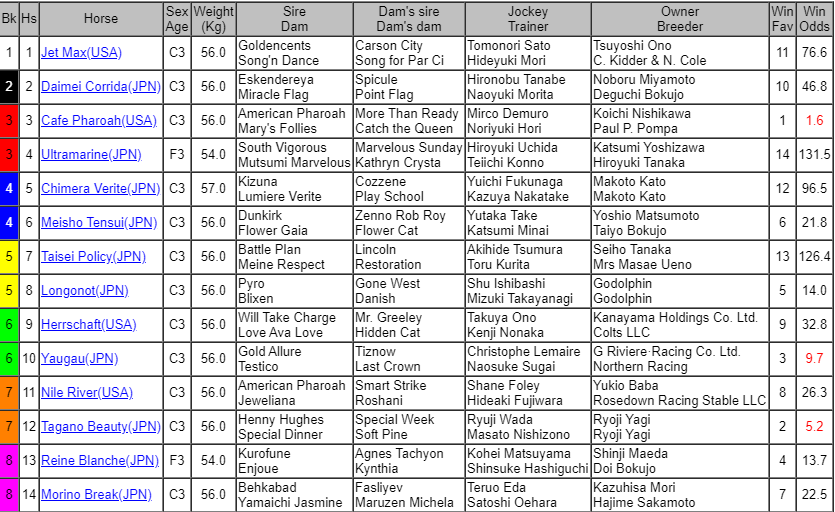