The current leader on the Japan Road to the Kentucky Derby, Cafe Pharoah, is not entered in Saturday’s Fukuryu S. at Nakayama, opening the door for another American Pharoah colt – Danon Pharaoh – to take over.

The fourth scoring opportunity in Japan, the Fukuryu is worth points on a 40-16-8-4 scale to the top four finishers. Cafe Pharoah earned 30 points by winning the Feb. 23 Hyacinth at Tokyo. The winners of the first two in the series, Vacation (Dec.18 Zen-Nippon Nisai Yushun) and Dieu du Vin (Nov. 23 Cattleya Sho) are likewise absent from the Fukuryu.

Triple Crown-nominated Danon Pharaoh tried the Cattleya Sho, but his chances as a forwardly-placed type were compromised by post 16. Thus his fifth at Tokyo isn’t a true reflection of his ability, especially considering he’d been a much better second to Dieu du Vin in their mutual debut.

Danon Pharaoh returned to action in a Feb. 15 Kyoto allowance, where post 14 was no hindrance to a sensible trip, and he romped by four lengths. The Yoshito Yahagi trainee must deal with the far outside post 13 on Saturday. Jockey Ryusei Sakai will try to work out a similar passage aboard the son of 2010 Santa Anita Oaks (G1) heroine Crisp.

Four of his rivals are coming off the Hyacinth. Fellow Triple Crown nominees Yaugau and Longonot finished third and fourth, respectively, to Cafe Pharoah, and therefore have points on the board. Yaugau (6 points), who sports a prior allowance win at this track and about 9-furlong trip, is likely to prefer these conditions to the Hyacinth’s one-turn mile.

Godolphin’s homebred Longonot (3 points), a half-brother to 2014 Dubai World Cup (G1) winner African Story, also brings local form to bear. While Longonot was a course-and-distance debut maiden winner, he was sixth to Yaugau in his ensuing allowance and must find a way to turn the tables.

The others from the Hyacinth are fifth-placer Herrschaft and the filly Reine Blanche, who suffered her first loss in 10th. Neither is nominated to the Triple Crown.

Aside from Danon Pharaoh, Yaugau, and Longonot, the Fukuryu line-up includes three more Triple Crown nominees. American Baby, an uncharacteristic 13th in the Cattleya Sho, was most recently fourth in a Kyoto allowance. The result looks better after the runner-up that day, Full Flat, came back to capture the Saudi Derby on the lucrative Saudi Cup undercard. The Tapit colt American Face was a maiden winner over this track and trip but exits an allowance 10th, while last-out allowance winner Vorst had been unplaced behind Reine Blanche and Immortal Smoke in his prior two.

Light Warrior is 2-for-2 since switching to dirt, both at this distance. A front-running winner at Hanshin, he attended the pace before pulling clear at Kyoto. Light Warrior figures to provide company for Danon Pharaoh early.

Immortal Smoke, a debut winner over course and distance, rebounded from a pair of fifths to spring an upset at Hanshin Dec. 15. One of two by Into Mischief, he’s joined by Jigen, who won two straight sprints but underperformed in his latest when sixth and now stretches out. Miyaji Kokuo, a neck shy of getting up on debut, has captured both subsequent starts. T O Keynes is also a two-time winner after overturning odds-on Danon Fast last out at Tokyo.

Here is the screenshot of the field from japanracing.jp, updated with post positions and odds as of 1 a.m. local time 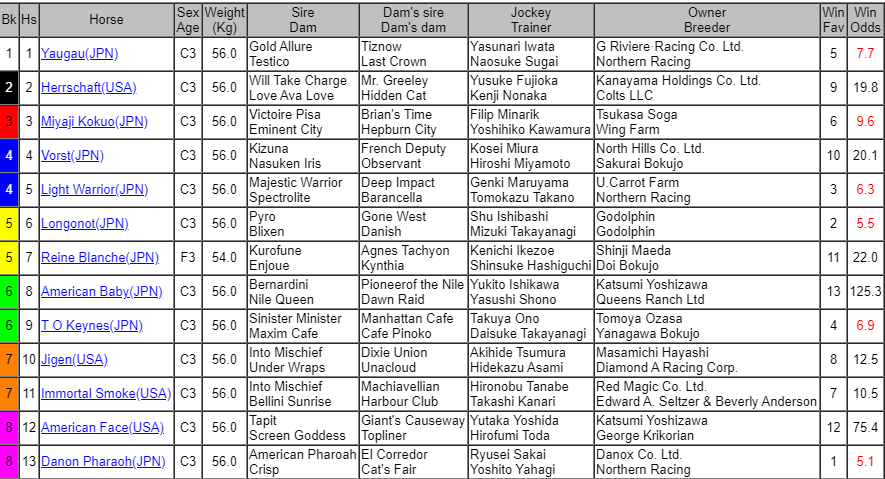