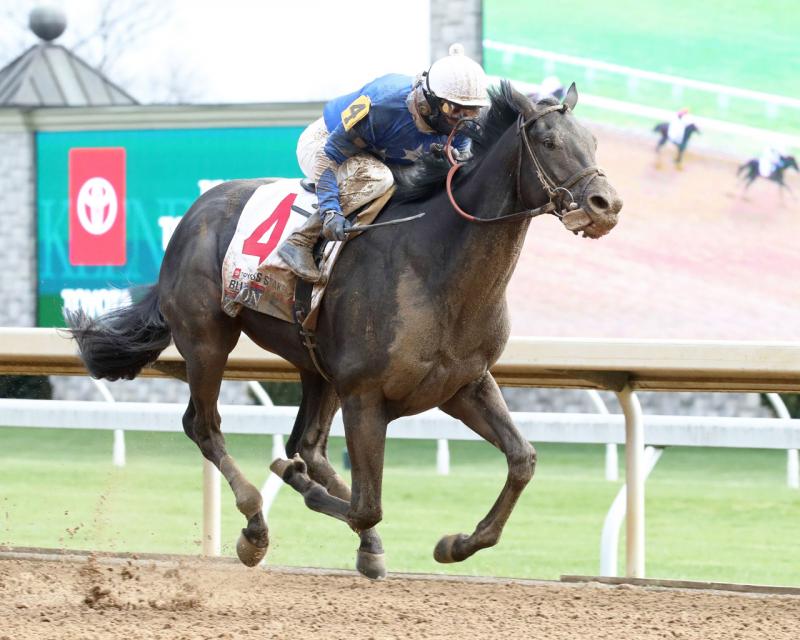 Jeff Drown’s Zandon picked up 100 points on the 2022 Road to the Kentucky Derby challenge series following his impressive 2 1/2-length victory in the $1 million Blue Grass S. (G1) at Keeneland on April 9. Trained by Chad Brown, the talented sophomore clocked 1 1/8 miles on the fast dirt strip in 1:50.35 with Flavien Prat in the stirrups.

"He broke just OK. Then I got myself covered up, so I was there with nothing I could do about it," said Prat, who rode Zandon for the first time Saturday. "The pace was a bit slow, so I was wandering down the backside. But I was traveling super—it was just a matter of finding a gap and getting a clean run down the lane."

Smile Happy, Emmanuel, and Golden Glider completed the top four and picked up points on a 40-20-10 basis, respectively.

Zandon debuted on October 9 at Belmont Park in a six-furlong maiden special weight dash and he made good at first asking, driving home a 1 1/2-length winner under the wire. He jumped directly to the graded stakes ranks when competing in the Remsen S. (G2) at nine furlongs, and the son of Upstart was especially game in missing by a nose to recent Wood Memorial S. (G2) star Mo Donegal in his two-year-old finale.

The dark bay colt commenced his three-year-old season with a creditable third-place finish in the Risen Star S. (G2) at Fair Grounds. He registered his first stakes victory in the Blue Grass, and his lifetime line reads 4-2-1-1, $713,000.

Zandon was bred in Kentucky by the state’s former Governor Brereton Jones and attracted a final bid of $170,000 at the 2020 Keeneland September Yearling Sale. He is the first registered foal out of the unraced Creative Cause mare Memories Prevail; she has since produced a two-year-old Summer Front colt named Sol Principe Gris and an unnamed yearling filly by American Freedom.

The winner continues to show improvement with escalating Brisnet Speed figures of 88-93-94-103 from four career races to date. Zandon has been of high quality since his debut, he possesses a huge late kick, and the impressive youngster could be rounding up to a peak showing in Louisville on May 7 in his third performance off the layoff. The son of Upstart must be considered among the horses to beat in the Run for the Roses.