Jerry Hollendorfer mentioned other reasons like a favorable track surface and the race’s placement on the calendar, but the fact remains Instilled Regard was able to avoid heavy hitters like Bolt d’Oro, McKinzie and Solomini by shipping to Fair Grounds for the January 13 Lecomte (G3).

Perhaps he’ll be the one who is feared this spring.

Instilled Regard continued his transformation into a serious Kentucky Derby contender, recording his initial stakes tally by a 3 ¾-length margin and the dark bay colt is starting to discover his best form for a Hall of Fame conditioner who has won more than 7,000 races but is still seeking an elusive Kentucky Derby victory.

Javier Castellano, the four-time reigning Eclipse Award winner and a 2017 Hall of Fame inductee, also lacks a Kentucky Derby title on his resume and flew in to ride Instilled Regard for the first time. This trainer/jockey duo has a chance to be well-positioned on the first Saturday in May if Instilled Regard keeps moving forward.

Castellano positioned his mount within striking range from the start, stalking the front-runners while racing wide the entire way. The dark bay colt edged closer rounding the far turn and when given his cue in upper stretch, Instilled Regard accelerated clear and dominated the stretch drive under a hand ride.

The Arch colt received a solid 96 BRIS Speed rating for the easy win and improved his point total to 14 while making his second start in a Road to the Kentucky Derby series qualifier. He could return to the New Orleans venue for the Risen Star (G3) on February 17.

A maiden scorer when trying stretching out to two turns in late October, Instilled Regard stepped up to make his stakes debut in the December 9 Los Alamitos Futurity (G1) and held his own against a pair of talented rivals, finishing a troubled third before being elevated to second by the stewards. He registered a career-best 100 Speed rating.

Breeders’ Cup Juvenile (G1) runner-up Solomini was disqualified and placed third after proving best in the latter stages and the Los Alamitos Futurity form has really shone in 2018 with McKinzie (who was placed first) rolling to a 3 ½-length decision in the Sham (G3) at Santa Anita a week prior to the Lecomte.

Instilled Regard appears to have plenty going for him following this exciting performance.

Principe Guilherme had to settle for second as the 6-5 favorite but performed admirably in his stakes debut. A front-running winner in his first two outings, the Steve Asmussen-trained son of Tapit was forced extremely wide into the first turn from post 10 and wound up stalking the pace for the first time in his career, racing in seventh down the backstretch.

He continued to be forced wide off the far turn and Principe Guilherme tried hard all the way to wire, gamely reeling in the front-running Snapper Sinclair for second. His win streak came to an end but the Lecomte could serve as a nice building block for the lightly-raced colt. 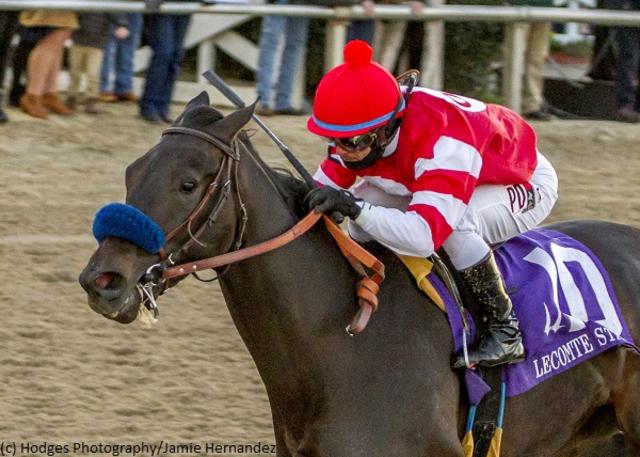