Mandaloun came up a nose short on the finish line in Saturday’s $1 million Haskell S. (G1), but the three-year-old was elevated to first by the Monmouth Park stewards, who disqualified Hot Rod Charlie for drifting in and clipping heels with Midnight Bourbon in midstretch.

Midnight Bourbon nearly fell after stumbling badly, and dislodged jockey Paco Lopez, but the Preakness (G1) runner-up managed to stay on his feet and appeared to escape major injury. Lopez was shaken up, but he is expected to ride the next day.

It was a tough loss for Belmont S. (G1) runner-up and Louisiana Derby (G2) winner Hot Rod Charlie, who made contact when crossing over in-front of a tiring Midnight Bourbon in midstretch.

After settling just off the early pace, Mandaloun patiently waited for room nearing the completion of the bend. The Juddmonte Farm homebred accelerated up the inside to challenge for the lead after straightening for home, and an exciting stretch battle developed with Hot Rod Charlie, who got the jump on his rival but had to take the overland route entering the stretch.

The duo dueled over the final eighth of a mile before Hot Rod Charlie put a nose in front on the wire, but any glory was short-lived. The final time for the 1 1/8-mile race was 1:47.38.

Florent Geroux was up on the Brad Cox-trained Mandaloun, who was exiting a neck victory in the June 13 Pegasus S. at Monmouth. Two starts back, the Into Mischief colt finished second in the Kentucky Derby. His first stakes win came in February’s Risen Star (G2) at Fair Grounds.

Following Sea, who wound up more than 18 lengths behind Mandaloun after setting the pace, was awarded second. Antigravity, Pickin’ Time, and Basso came next. Hot Rod Charlie was placed last of seven runners.

Bred in Kentucky, Mandaloun is out of the Group 2-winning Empire Maker mare Brooch. 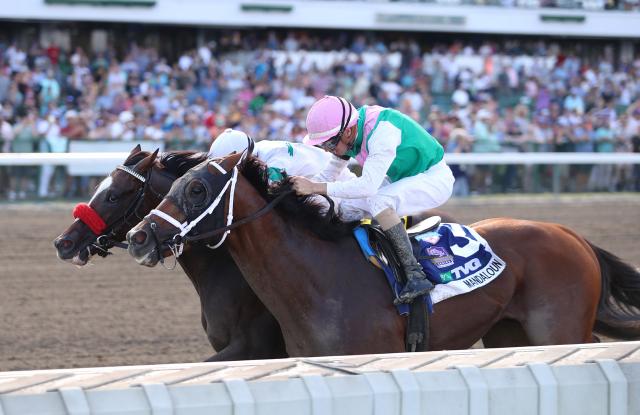