Tales from the Crib: Bodexpress 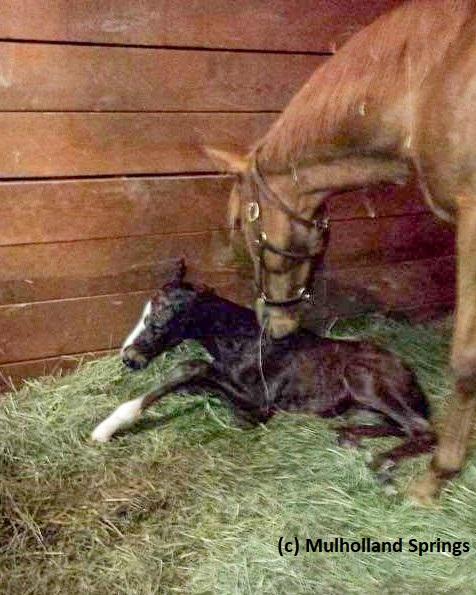 Over the winter, Remsen (G2) hero Maximus Mischief appeared well on his way to the first Saturday in May, only to sustain an injury and end up being retired. And a Mulholland-bred who was totally off the radar until his surprising second in the Florida Derby (G1), the maiden Bodexpress, was still on the outside looking in – until the scratch of morning-line favorite Omaha Beach.

Bodexpress was bred and raised at Mulholland Springs, the Lexington, Kentucky, farm established by Martha and her late husband, John. The Mulhollands had bred top Quarter Horses in Oklahoma before moving to the Bluegrass.

Joining the Mulholland Springs broodmare band, Pied a Terre visited Stormy Atlantic (sire of her most successful half-brother Stormy Lord). Her resulting first foal, Gentrification, placed in his only start.

“From the very beginning, Bodexpress was always a strong, well balanced, classy colt,” Mulholland said. “Bodexpress has the type of chiseled, muscular hip that I admire, with a bold athletic walk.”

His demeanor was just as winning, being “always willing, compliant, easy to get along with.”

The Mulholland Springs colts entertained themselves by playing ball. They would throw the balls to each other in the barn, passing on down the line with thuds along the way. For a small operation with about 30 mares, that team included several notable names. Imagine Bodexpress throwing to Manny Wah (the Lecomte [G3] third who runs in Saturday’s Pat Day Mile [G3] on the Derby undercard) and Maximus Mischief.

“We were blessed with a classy group of colts that year,” Mulholland said, adding that Take Charge Angel, “a filly bred for our clients, Anne and Ron Sheffer, is a strong contender in the Eight Belles Stakes (G2) on Kentucky Oaks Day. This is a thrilling Derby week for Mulholland Springs.” 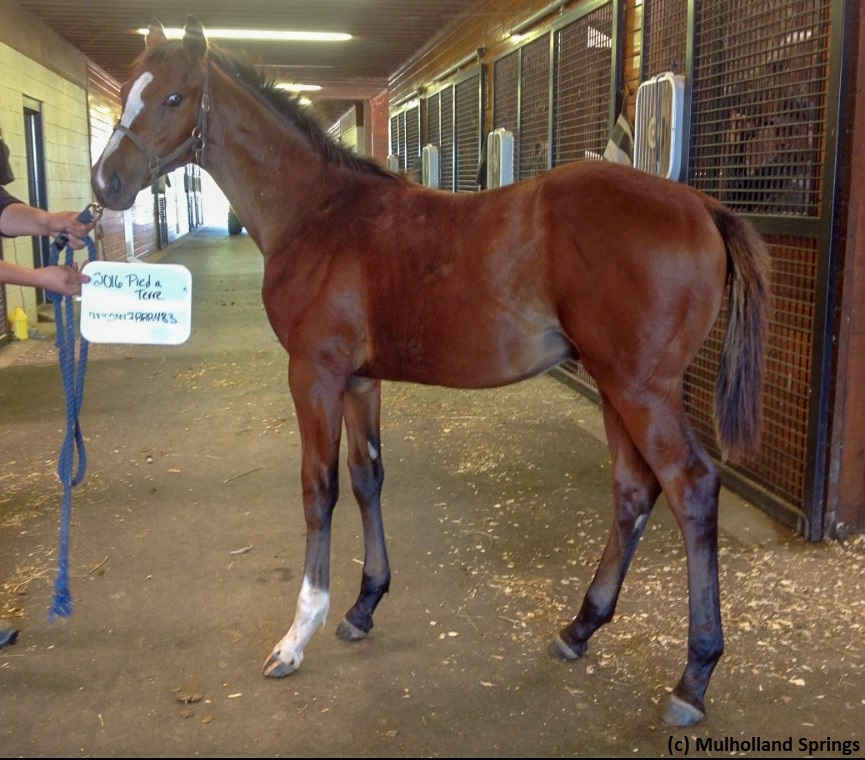 After Bodexpress celebrated his first actual birthday, Bodemeister earned his way into an exclusive club by siring a Derby winner in his first crop, Always Dreaming (2017).

The yet-unnamed yearling was offered at the Keeneland September Sale, but the top bid of $45,000 did not reach his reserve price. Then Global Thoroughbreds bought him privately and sent him to J.R. and Katie Boyd’s Brick City Thoroughbreds, which prepares Global’s prospects for the two-year-old sales.

“Global Racing offers all of their horses for sale at reasonable prices,” J.R. Boyd said. “Their main goal in the business is to buy and sell.”

Thus Bodexpress was on the same trajectory as his aforementioned half-brother Gentrification, who likewise went through the Boyds’ program. At Keeneland September, Bodexpress reminded Boyd of his half-brother at the same stage, and surmised that he could make similar progress over time.

Bodexpress sailed through the educational process at Brick City, a reference to the historic nickname of Ocala, Florida.

“He trained real easy – real smart horse,” Boyd noted. “He was so easy to ride, you could put a novice rider on him. Real easy to handle.”

The colt also kept up his ball-playing skills.

“If you threw a ball, like the jolly ball, into his stall, he would throw it right back over to you.”

Shipped to Maryland for Fasig-Tipton’s Midlantic Sale last May, Bodexpress uncorked his big stride to work a quarter-mile in :22 at the under tack show.


But prospective buyers, seeking physical perfection, were put off by a minor issue. Bidding ceased at $37,000, and he was led out unsold.

Accordingly, Global Thoroughbreds retained the colt, and brought new partners on board. Top Racing bought into him, becoming the primary owner listed in the partnership, and trainer Gustavo Delgado’s GDS Racing Stable also acquired an interest.

Bodexpress was freshened after the sale and geared up at Delgado’s Gulfstream Park West base, where he made his debut last November. Never in it after a rough start, he checked in ninth in the worst result of his career. Bodexpress went on to finish second in three of his ensuing four starts at Gulfstream Park.

On December 23, Bodexpress was a clear runner-up to Todd Pletcher’s even-money Overdeliver, who came back to place second in Win Win Win’s track record-setting Pasco. Next Bodexpress lined up in the same maiden on Pegasus World Cup Day that featured ultra-impressive Hidden Scroll, and tired to fourth.

Bodexpress came closest to breaking his maiden on February 16, when missing by a neck. Finishing well back in third was Pletcher’s 3-5 favorite Fort Worth, who was “pinballed” at the start according to the chart. Fort Worth came right back to romp at Aqueduct. Another moved forward from that maiden, fourth-placer Bandon Woods, to win well at Keeneland for Chad Brown.

So far Bodexpress had been racing around one turn. His first try around a route of ground came in a tough spot – the Florida Derby. As a maiden after four starts, he understandably was ignored at 71-1, only to prove the odds all wrong when chasing Maximum Security home in second. Along the way, he turned the tables on maiden conqueror Hidden Scroll, whose Derby dreams evaporated in sixth.

Bodexpress banked 40 points toward the Kentucky Derby, the same total as Spinoff, but found himself on the “bubble” because of the tiebreak. Spinoff had more non-restricted stakes earnings, putting him just across the threshold into the field, while Bodexpress was stuck in 21st.

Connections went ahead and entered him in case one of the top 20 would scratch by the Friday morning cutoff. When the bombshell news about Omaha Beach broke Wednesday evening, Bodexpress had the defection he needed.

Mulholland Springs, whose chances of having bred and raised a second Derby runner apparently vanished with Maximus Mischief, was now suddenly back in with an opportunity to cheer on their baby. Not that farm co-owner and general manager John Henry Mulholland, John and Martha Jane’s son, was taking any joy in the way it transpired:

We are thrilled @ Mulholland Springs to see Bodexpress draw in for the @KentuckyDerby but certainly not at the expense of a great horse like Omaha Beach. Hopefully Bodexpress gives a respectable effort and we see Omaha Beach run again very soon.

The Mulhollands had bred 2009 Derby contestant Flying Private, who ran 19th behind 50-1 shocker Mine That Bird. Ten years later, in Derby 145 that’s also forecast to be run in the slop, they’ll be hoping Bodexpress can spring a shock of his own.

There is precedent in Derby history for a maiden to win, most notably Sir Barton (1919), the first Triple Crown sweeper, whose centenary we celebrate this year. Sir Barton’s maiden-breaking Derby is bookended by Buchanan (1884) and Brokers Tip (1933).

Buchanan was the first of three Derby victories for legendary jockey Isaac Murphy, who also guided him to win the Clark at Churchill. Brokers Tip prevailed in the “Fighting Finish” with Head Play, so called because their respective jockeys, Don Meade and Herb Fisher, were literally grappling with each other as the horses dueled to the wire. (And the fracas spilled over into the jockeys’ room.) Unlike Buchanan and Sir Barton, however, Brokers Tip never won another race.

The Derby has been an insuperable challenge for maidens ever since. The most recent examples are Trojan Nation (2016) and Sonneteer (2017), both finishing 16th.

If Bodexpress has to buck eight decades of Derby stats to win, he’s beaten the odds just to make it into the gate. 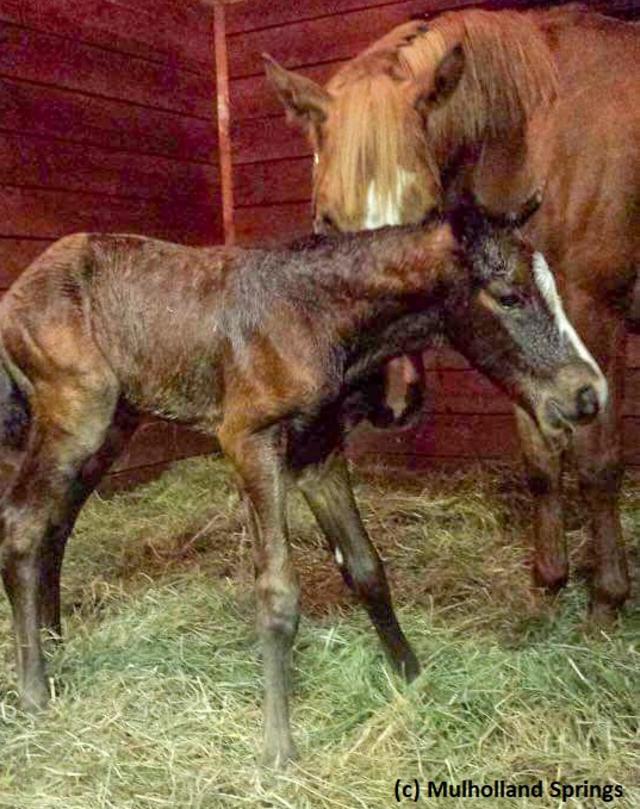