Tales from the Crib: Epicenter 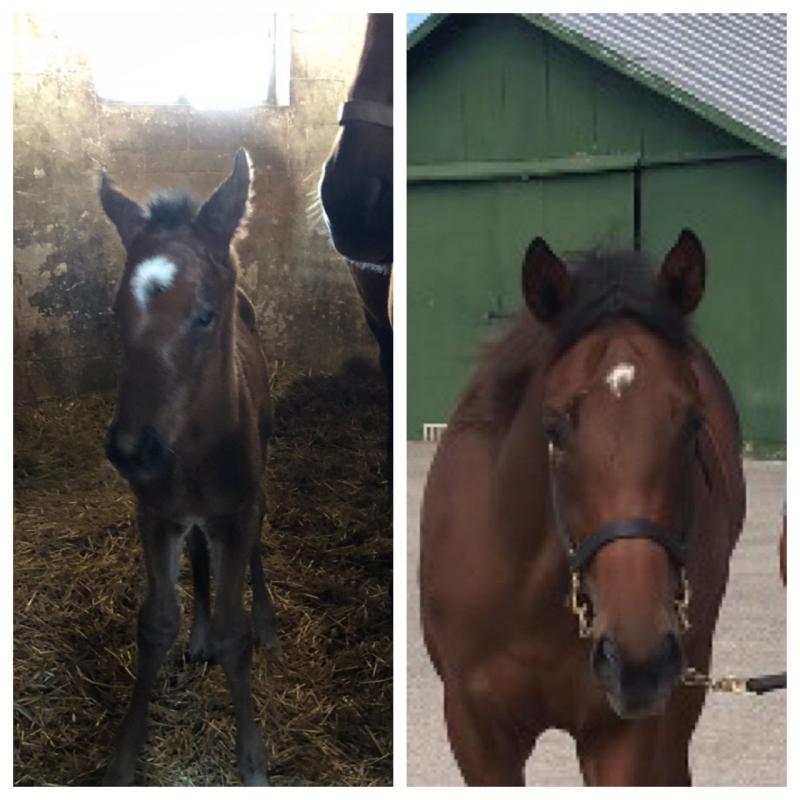 "How it started/how it's going," with Epicenter as a newborn and yearling (Photos by Beth Harris)
Epicenter was born and raised in the Bluegrass State, but not anywhere near the epicenter of Kentucky’s Thoroughbred breeding industry. The Kentucky Derby (G1) contender hails from a family farm in Bowling Green, much nearer to Nashville than to Lexington.
Bettersworth Westwind Farms is in a section of Bowling Green that was spared when deadly tornadoes ripped through in mid-December. Epicenter has put his hometown back in the headlines for a much happier reason, as the impressive winner of a pair of Derby points races at Fair Grounds. He’ll try to make it three as the 7-5 morning-line favorite for Saturday’s $1 million TwinSpires.com Louisiana Derby (G2).
A hands-on operation run by brothers Mike, Brent, and Kevin Harris, Bettersworth Westwind embraces land that’s been in the family for more than a century. The “Bettersworth” part of the name commemorates their grandfather, the enterprising J.R. Bettersworth, who ensured that the farm would stay in the family. The property, which had belonged to his wife’s parents, went up for sale after their passing, and he purchased it.
Bettersworth began raising Saddlebreds before turning his attention to Thoroughbreds in the 1960s. His Harris grandchildren, accordingly, were always immersed in horses, and they have continued to build upon his legacy as breeders who raise to sell.
“Horses have been part of our lives since we were born,” Mike Harris said. “I probably rode a horse before I could even walk. We’ve just been around horses our entire life, Saddlebreds when we were kids.”
Bettersworth’s marquee performer was Hall of Fame sprinter My Juliet, who beat Kentucky Derby winner Bold Forbes in the 1976 Vosburgh H. (G2). Bettersworth bred one Kentucky Derby participant, Helio Rise, the 14th-place finisher behind Venezuela’s Canonero II in 1971. Ironically, Helio Rise was himself on the Derby trail at Fair Grounds, winning the Lecomte H. that was then held in March.
While Epicenter would be the first Kentucky Derby runner produced by the Harrises of Westwind, Brent and his wife, Beth, have bred a competitor in the other jewels. Mint Slewlep tried the 2007 Preakness (G1), and Meantime made an appearance in the 2017 Belmont (G1).
Meantime’s older half-sister, Sweet Reason, was much more successful as a multiple Grade 1-winning millionaire. Other Grade 1 scorers arising from Westwind are Santa Teresita and her maternal relative Valid Point. Bob’s Edge, the up-and-coming winner of the King Cotton S. and Whitmore S. (G3) at Oaklawn Park, is a “nephew” of fellow Westwind-bred Restrainedvengence, whose third in last fall’s Breeders’ Cup Dirt Mile (G1) made him a millionaire.
Epicenter’s dam, Silent Candy, was brought into the Westwind fold for $130,000 at the 2014 Keeneland November Breeding Stock Sale. The Candy Ride mare, a Grade 3-placed stakes winner, was in foal to Scat Daddy at the time.
When evaluating prospective stallions for her to visit in the 2018 breeding season, the Westwind team was taken with Not This Time. The well-bred son of Giant’s Causeway had his career cut short by injury, but he had shown real talent. His stud fee was within the farm’s budget, and crucially, Not This Time provided the right physical to complement Silent Candy. The pedigree angle of combining Giant’s Causeway with Candy Ride was nice on paper, not determinative.
“We always look at that, but that’s not the one thing,” Harris said of the pedigree. “We just liked the cross physically.”
Silent Candy foaled her bay colt on Jan. 29, 2019, and he proved to be an inquisitive, even fearless, type. 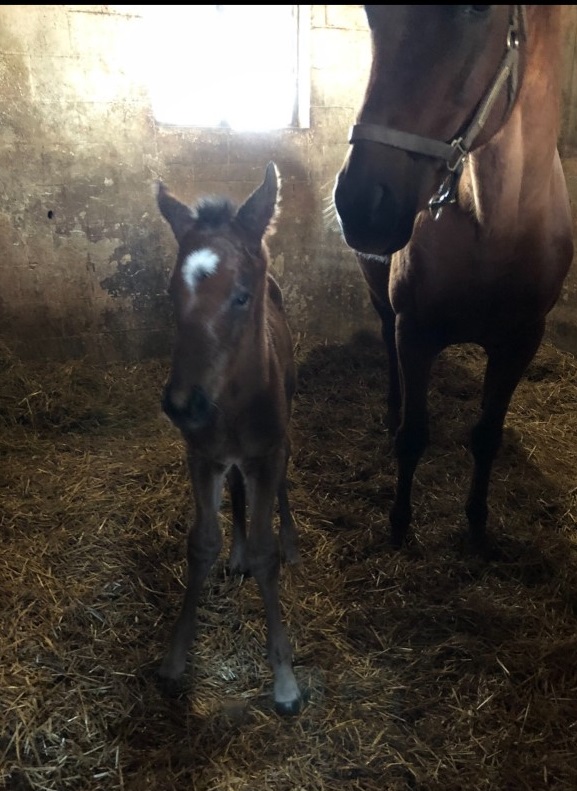 “He was really easy to get along with,” Harris recalled. “He wasn’t afraid of anything, like some foals would be. He would go up to something strange in the hallway of the barn and smell at it. He’d go see what it is. He was just a really smart colt.”

Like Silent Candy’s other foals, her Not This Time colt took his time to develop as a yearling.

“Most of her foals are late developers, as far as progressing to the yearling sale,” Harris said. “Early in the year, and even up until about May, they haven’t filled out like some of the earlier foals have. It always took two or three months before the sale for most of hers to blossom.” 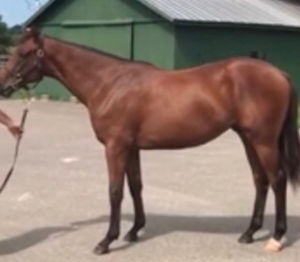 The clock was ticking for the yet-unnamed colt, who was slated to sell at Keeneland September. But he ended up putting it all together beautifully – so much so that he was unrecognizable, even to an astute judge who’d come to see the yearlings on the farm a couple of months prior.

Aside from looking the part, the yearling also had the mechanics of an athlete.

“He was just a really nice colt, fluid walker. He had the kind of walk that you want them to have. He was really well balanced and really smart.”

Cataloged as Hip No. 1956, in Book 3, and touring the ring during the sixth session of the 12-day sale, the Bettersworth Westwind colt sold to Winchell Thoroughbreds for $260,000.

Winchell’s top runners of recent years include Horse of the Year Gun Runner and champion Untapable, both trained by Steve Asmussen. Earlier at the same Keeneland Sale, Winchell acquired a filly from Gun Runner’s first crop for $300,000 – we now know her as champion Echo Zulu, who will also race Saturday in the Fair Grounds Oaks (G2).

Like Echo Zulu, Epicenter went to school at El Primero, the Laredo, Texas, academy of Asmussen’s parents, Keith and Marilyn. The filly was ready to race by July, but Epicenter didn’t debut until September.

Not fully fit when sixth in that Churchill Downs unveiling, Epicenter was primed next time out beneath the Twin Spires in November. His convincing maiden tally propelled him straight to the Dec. 26 Gun Runner S. at Fair Grounds, where he starred in a sentimental victory for connections. Epicenter came close in the Jan. 22 Lecomte (G3), just nailed late, but rebounded in style in the Feb. 19 Risen Star (G2).

If Epicenter adds the Louisiana Derby’s 100 points to his resume, he’d cause a seismic shift on the Kentucky Derby leaderboard. And those waves would reverberate all the way back to Bowling Green, where Silent Candy just delivered a half-sister (by Outwork) to Epicenter. Silent Candy is set to return to Not This Time, so a full sibling hopefully will be on the way – you might call that baby an “aftershock.”

All photos courtesy of Beth Harris