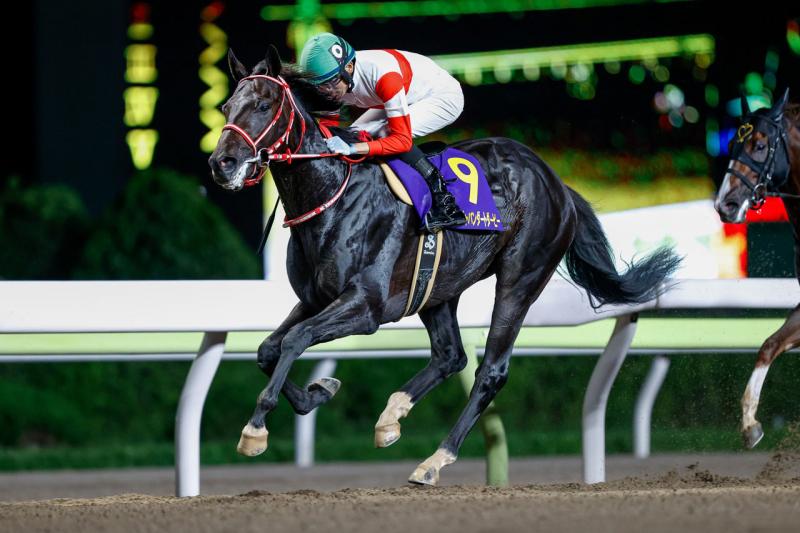 The Japan Road to the Kentucky Derby concluded with an upset in Wednesday’s Japan Dirt Derby. As heavy favorite Cafe Pharoah retreated through the field to endure his first career loss, it was the other colt by American Pharoah – Danon Pharaoh – who powered home for his first stakes victory.

A Japanese-bred son of Grade 1 winner Crisp, Danon Pharaoh had fallen into a pattern of alternating strong efforts with disappointing ones. The Tokyo maiden winner was among the top contenders for the opening race on the Japan Road, the Nov. 23 Cattleya Sho, only to wind up fifth. After rebounding in a Kyoto allowance, he was favored in the Mar. 28 Fukuryu S., but again failed to score any Japan Road points when sixth.
Danon Pharaoh turned the page with a terrific second in the May 6 Hyogo Championship at Sonoda, where he was caught late by Barnard Loop while pulling nine lengths clear of third. Last time out, though, he regressed to 14th in a 16-horse field in the May 24 Hyoso S. at Kyoto.
Overlooked at 35-1 in the Japan Dirt Derby, Danon Pharaoh was back to firing his best. The Danox Co. Ltd. runner tracked the pace set by fellow Triple Crown nominee Daimei Corrida, and the two eventually turned it into a match race by drawing away from the rest.
Cafe Pharoah fans could have sensed the impending result as the race unfolded. The hitherto unbeaten colt got away in good order from post 2 and secured position just behind the leader, but appeared to bobble going into the first turn. Although Cafe Pharoah maintained his spot down the backstretch, he had to be nudged to try to improve nearing the far turn. Instead of picking up with his usual alacrity, he found nothing in response and trudged home a distant seventh.
Meanwhile, Danon Pharaoh was kicking into top gear for jockey Ryusei Sakai. Challenging Daimei Corrida turning for home, he soon drove past the pacesetter to prevail by 1 3/4 lengths and paid $73 according to TwinSpires.com.
Danon Pharaoh became this year’s second “Derby” winner, so to speak, for trainer Yoshito Yahagi. His current stable star, champion Contrail, is going for Japan’s Triple Crown after dominating the Tokyo Yushun (Japanese Derby) (G1) on turf.
In the circumstances, it would be a fascinating story line if Danon Pharaoh can emerge as a potential contestant in a U.S. Triple Crown race. The dark bay’s victory earned him 40 points on the Japan Road leaderboard, which puts him second to Cafe Pharoah’s 70-point total. Stay tuned for developments about whether Cafe Pharoah accepts the invitation to the Kentucky Derby off this shocking loss.
Quick-take explanations for Cafe Pharoah’s disappointment circulated in the immediate aftermath on social media. One idea was that the heavier type of track at Oi Racecourse did not suit him. The surface is deeper, as suggested by Danon Pharaoh’s time for about 1 1/4 miles – 2:05.9 on a track listed as muddy.
Another plausible theory was that Cafe Pharoah was wheeling back on short rest for the first time in his brief career. Not only had he just run on June 21, but he’d put up a gigantic performance by breaking the stakes record in the Unicorn (G3) at Tokyo. Regression would be understandable when reappearing quickly from such a peak.
Less persuasive, at this point at least, was the distance factor. Cafe Pharoah had dominated his debut at about 1 1/8 miles, and here he was sputtering long before stamina would have become an issue. This was simply a too-bad-to-be-true display to draw any conclusions about his optimal trip.
Runner-up Daimei Corrida, who had been third in the Nov. 23 Cattleya Sho and ninth to Cafe Pharoah in the Feb. 23 Hyacinth in his prior Japan Road attempts, added 16 points on Wednesday. The son of Eskendereya now has a total of 18 to place fifth on the leaderboard behind Cafe Pharoah, Danon Pharaoh, Cattleya Sho winner Dieu du Vin, and Zen-Nippon Nisai Yushun scorer Vacation.
Kitano Octopus rallied for third, another five lengths back, followed by Bravoure. Third and fourth were worth 8 and 4 points, respectively, but neither was nominated to the Triple Crown. Next came Miyaji Kokuo, Aime Limite, Cafe Pharoah, Barnard Loop, Causey Son Rad, Riko Seawolf, Gamila’s Jackson, Full Flat, and Gold Bomber.
Danon Pharaoh was officially bred by Northern Farm, but arrived in utero. Katsumi Yoshida purchased his dam Crisp, then carrying her foal by American Pharoah, for $350,000 at the 2016 Keeneland November Sale. Crisp had previously sold to Adena Springs for $1.2 million at Fasig-Tipton Kentucky November in 2011, so Yoshida picked up a bargain.
Crisp, trained by John Sadler, scored a notable upset of her own when toppling Blind Luck in the 2010 Santa Anita Oaks (G1). She also captured the Santa Ysabel (G3) over Evening Jewel. Both of those rivals beat her in the Las Virgenes (G1) and Kentucky Oaks (G1).
A daughter of El Corredor, Crisp descends from a well-known female line. She traces to Igual, dam of 1946 Triple Crown winner Assault, and further back, to Masda, a full sister to legendary Man o’ War. 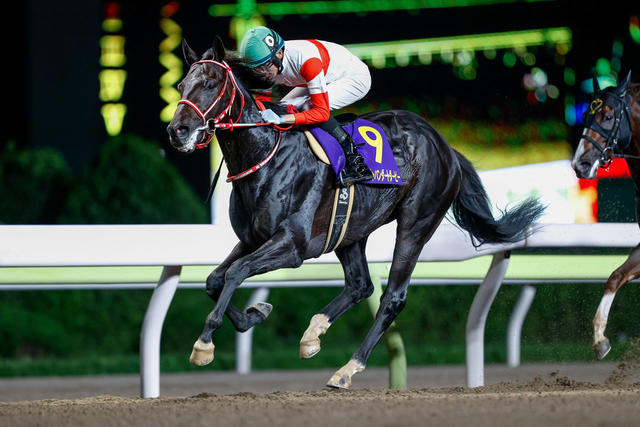